In this concrete jungle that Singapore is today, any story of wildlife encounters on this island, such as that of otters, snakes and monitor lizards mistaken for crocodiles, attract our attention. We seem to be amazed by the idea that Singapore in its present state can have any wildlife at all, apart from crazy cat-killers.

It is hard to imagine a time when our little island was covered with jungles and teeming with wildlife, such as sambar deer, snakes, monkeys, and tigers. Yes, Singapore was once crawling with tigers.

Tigers were native to Singapore, but some swam over from Malaya.

An early record of tigers in Singapore can be found in an article dated Sep. 8, 1831 in the Singapore Chronicle newspaper. The article reported that tigers were becoming an increasing menance, and one had killed a Chinese plantation coolie in what is probably the present day Bukit Purmei area:

We regret to learn that tigers are beginning to infest the vicinity of the town to such a degree as to require serious attention on the part of the local authorities, with regard to their destruction. Not many days ago, the friends of a Chinese woodcutter, who had been missing for some days, discovered the head, and part of one leg of their companion, in the thicket not far distant from the rear of the Chinese temple which lays near the road leading to New Harbour, and contiguous to the Sepoy lines. Marks of a tiger's feet were plainly indented in the ground, round about the spot. We have heard that another native has been killed, since, by a tiger, in a different direction.

Chinese plantation coolies were particularly susceptible to tiger attacks, due to the nature of their jobs. As the number of gambier and pepper plantations grew in Singapore between the 1830s and 1840s, so did the number of coolies working in them. This, of course, led to higher incidences of tiger attacks.

Tiger attacks in Singapore grew, and became so common that by the mid-1800s, there was an average of one tiger attack a day. Bukit Timah was a particularly notorious location where tigers roamed and attacked humans, earning the nickname "tiger resort". An entire village near Bukit Timah had to be abandoned in 1859 due to the numerous attacks.

Eventually, towards the end of the 1800s, the tiger population declined due to tiger hunting, and the tiger attacks became less frequent. However, tigers continued to inhabit Singapore till the early 1900s. 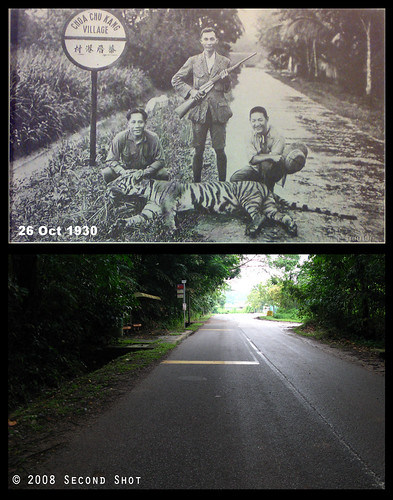 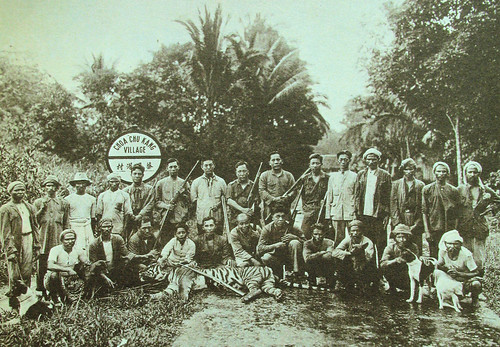 Singapore's last tiger was shot and killed by hunters in Choa Chu Kang on Oct. 26, 1930.