When is a word or phrase racially insensitive?

In many ways, that question is the crux of this insanely convoluted Facebook thread.

Uber/Grab SG Partners is a Facebook community for Uber and Grab drivers to talk about their day, or driving-related issues.

According to a reader who sent us the following screenshots, there had been an increase in usage of the term "Ah Pu Neh Neh" in the thread when describing Indian passengers.

This led to the following post by a concerned member of the group:

His worries were swiftly played down by some fellow non-Indian members, however.

Here are some of the reasons they gave for this remark not being a problem at all:

A fellow community member challenged this notion by noticing that the presence of the racial epithet suggested a proclivity for racism.

At which point, everything went to pieces:

Tan, the dude who went into a tailspin also shared this pearl of wisdom:

In short: you have to earn the right to not be called racially-insensitive names.

2. Singaporeans should be ok with some humour

Another common response was that this was a non-issue, and true Singaporeans would be ok with this type of language:

With one even claiming it was quite endearing:

A point some of the minorities in the group disagreed with: 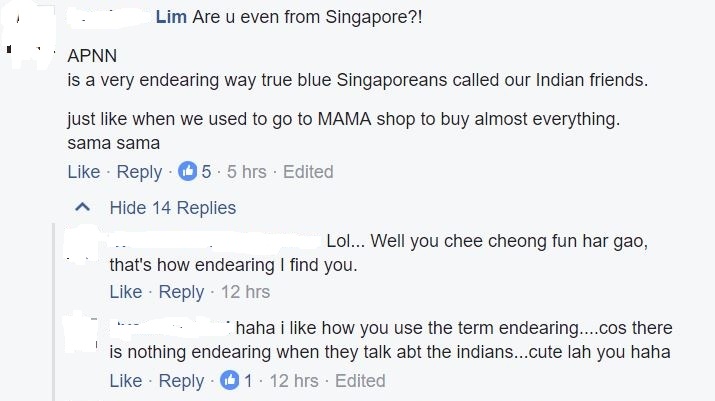 It is perhaps no surprise that the above two reasons prompted this train of thought.

Why are you offended? I'm not referring to you what — if you're offended, it means you are one of them: 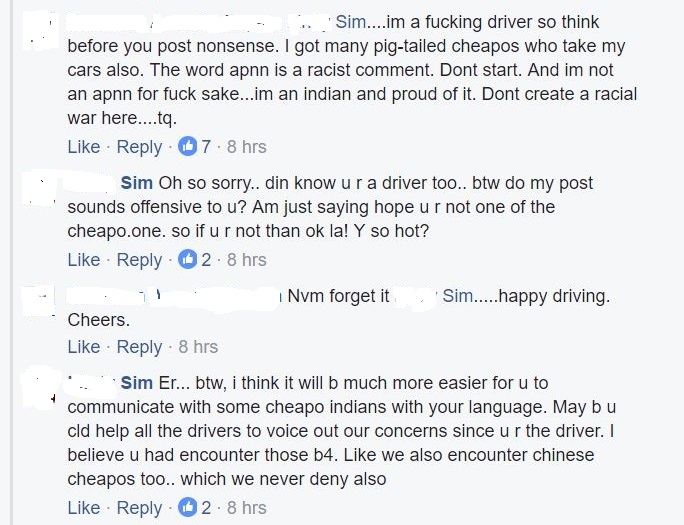 Yeah, why you so hot? It's almost as if disparaging an entire race, and then making exceptions, is still kind of offensive.

And it is here that people might wonder, why? Why use that phrase at all?

And the answer provided in the thread is why not?

Why not? My grandmother say it's ok what.

Why not? My Indian friend say it's ok what.

Why not? Hossan Leong and Kumar got say what.

And that's the problem right there.

There is a tendency to extrapolate one minority's view of a subject to justify whatever worldview you wish to push through regarding any minority issue.

Non-Indian person: Oh, my Indian friend say it's ok to call someone APNN, therefore every Indian should be ok with it.

Indian person: But oh, I'm an Indian Singaporean, and I am uncomfortable with you using that term.

Non-Indian person: Ah, then it's your problem la, real Singaporeans won't have a problem with the term one.

That is not a diversification of views, that is cherry-picking responses till your worldview gains a darker shade of credibility.

But how do we know what is offensive, and who do we consult to decide on the offensiveness of words?

But Alfian Sa'at probably puts it best in a Facebook post from earlier this year on the idea of what is racially offensive:

There’s a simple rule actually. If someone who is not from your community thinks that a word is a slur, then stop using it, no matter if some other person from that community claims otherwise.

Ask yourself why it is necessary for you to use such a tarnished and contentious word when other words with much less baggage are available. A slur is a knife—if you’re the one holding the handle, you don’t get to decide how sharp it is — this is the sole and sovereign right of the person at its tip.

If you're looking to invest in a foreign property, this article might come in handy:

QUIZ: Which of these gorgeous countries should you buy property in?