Mary Toh, Amos Yee's mother, has confirmed that her son is seeking political asylum in the US and has declined speaking with the media about it.

The US Immigration and Customs Enforcement website indicated that the 18-year-old Singaporean male is detained in the McHenry County Adult Correctional Facility in Woodstock, Illinois.

Yee last tweeted and posted on Facebook on Dec. 15. 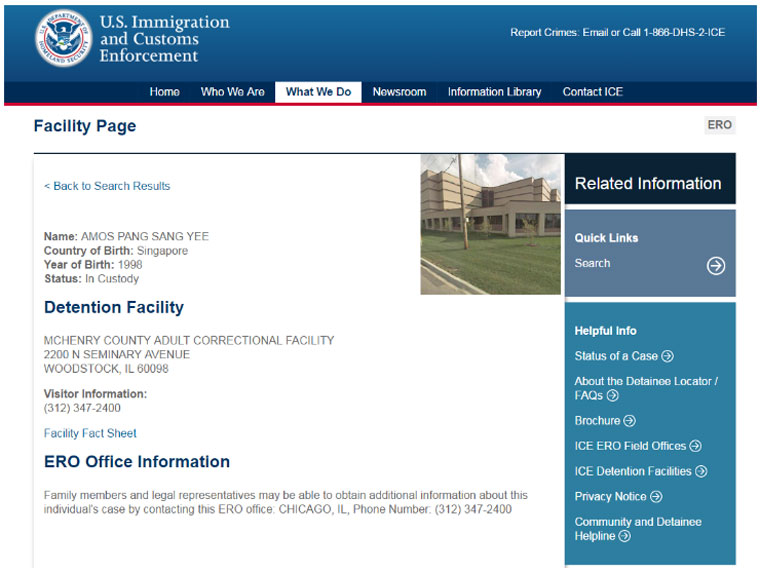 South China Morning Post reported that Yee was detained on Dec. 16, after he landed at O’Hare Airport in Chicago.

US-based Singaporean civil activist Melissa Chen said Yee “entered the US with a tourist visa but was detained following a secondary screening”.

This was after he told immigration officers he was seeking political asylum.

According to the US Department of Homeland Security, asylum may be granted to those who are unable or unwilling to return to their home country due to persecution or a well-founded fear of persecution because of the asylum seeker's race, religion, nationality, membership in a particular social group or political opinion.

In July 2015, Yee was sentenced to four weeks’ jail after he pleaded guilty to six charges for wounding the religious feelings of Christians and Muslims.

In late September 2016, Yee was again sentenced to six weeks’ jail for the same offence.

According to Channel News Asia, Yee is due to be enlisted for National Service.