Kishore Mahbubani is the embodiment of globalisation -- he lives and breathes it in his life and work.

After all, he is the Dean of the Lee Kuan Yew School of Public Policy at the National University of Singapore, a school that houses a global classroom made up of mostly international students (80 per cent) from 80 countries.

Read the books that he authored -- Beyond the Age of Innocence: Rebuilding Trust Between America and The World, The New Asian Hemisphere: The Irresistible Shift of Global Power to the East, and The Great Convergence: Asia, the West, and the Logic of One World -- and you will find a common theme of globalisation and its impact.

Hence, it is no surprise that Kishore was asked to speak about whether Singapore can turn away from globalisation in the U Future Leaders Summit on Friday (Nov. 18). This is after the world had experienced a nasty 2016 with Brexit and the rise of extreme right-wing movements in Europe, and many tapping on the anti-foreign sentiments that have perhaps resulted from globalisation’s inequalities.

The "globalisation cheerleader", shared his views on Donald Trump, how his "demotions" helped him, and what young Singaporeans can do in this brave new world.

As we begin, we just have to ask the seasoned former diplomat and American expert about The Trump. What is his view on President-elect Trump and his impact on Singapore and the region?

"Well, the Trump presidency was clearly a shock. (Photo by Jim Watson, AFP, Getty Images)[/caption]I sensed that he had some good chances of winning because the American population is very angry. They’re especially angry with the Washington DC establishment, they believe that the elites in America have taken care of themselves, but not taken care of the people.

So, they’re ready for change. They’re ready to vote out an establishment candidate like Hillary Clinton. So he won."

But Kishore was quick to warn Singaporeans about not tearing up the world map yet.

"It’s very important for Singaporeans not to be seduced by what the American media writes. Clearly there are many Americans that are backtracking from globalisation.

So, we should be cheering on globalisation."

2. What would you say to young Singaporeans, fresh graduates and PMETs who are worried about these phenomenon (Brexit, Trump) thinking that perhaps they may not be able to live a life as comfortable as their parents?

"First, young Singaporeans should understand why surprising things like Brexit, and Trump have happened.

My personal theory is that the fundamental reason why you are having these shocking developments is that the western leaders have been lying to their populations. They have not prepared their populations for the new reality when all these Asian countries suddenly wake up and join globalisation, there’s going to be a lot of creative destruction.

So clearly some industries in Europe and America are going to die when China decides to join the global economy...

That’s my message to the young Singaporeans -- it’s a new world, and you have to change and adapt, because the world will keep changing, very fast, all the time."

So what should young Singaporeans do to navigate this brave new world? Here are five key lessons he imparted during his one-hour interview.

Lesson 1: Singaporeans can learn to be more idealistic and "think big" 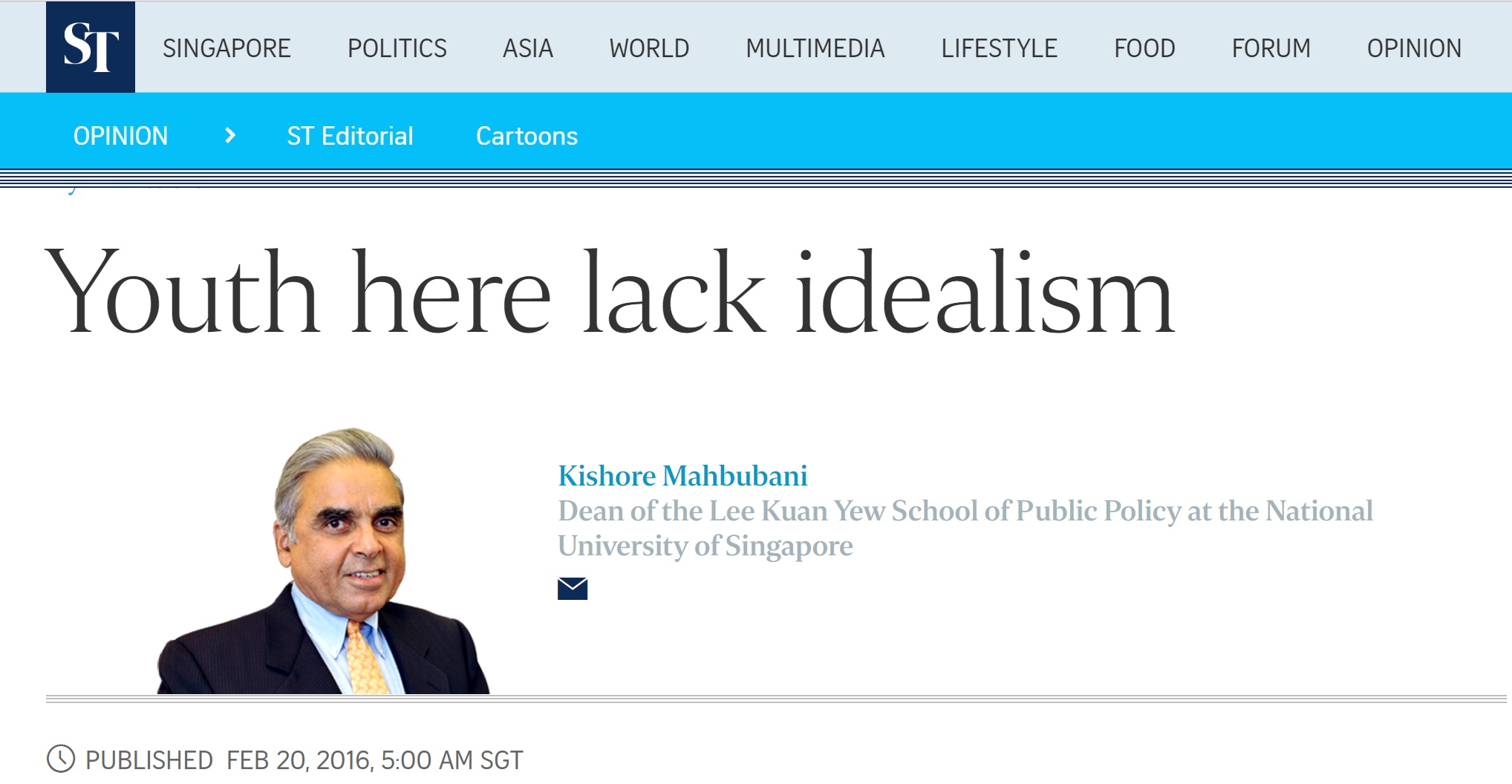 You can read his Straits Times commentary here.[/caption]"Singaporeans can become as idealistic as this young Dutchman (Boyan Slat) and can lead campaigns that will change the world and make it a better place.

The important thing is not to be too kiasu, not to worry too much.

Not to think just only about what your next step is, what your next career is, but actually to think big and see how can you make the world a better place by working with others around the world and grow more as a person to contribute even more."

Lesson 2: Avoid complacency and continue to learn and adapt.

"The biggest danger that young Singaporeans face is that they can become too complacent.

The difference I find is that Singapore has been successful for so long, we take success for granted...to remain peaceful and prosperous takes a lot of effort.

For a city like Singapore, you got to keep on reinventing yourself."

"Many Singaporeans think that I’ll work hard, study hard, get a degree, fine. Get a diploma, I’ll be fine.

No -- when you get a degree, that’s when you start a new journey of learning and changing and adapting. And that’s what I find young Singaporeans don’t do enough of.

In this new world, when you finish school, you are actually starting a new school. And you got to start learning all over again.

So that’s the change in mindset. But you got to see that not as a chore, not as an imposition, not as a something that is a burden, but a source of joy.

You only have one life, why not spend that whole life learning as much as possible so by the time you finish working 50 years later you can say, it’s been an enjoyable journey because I learnt so much in the course of my working life." 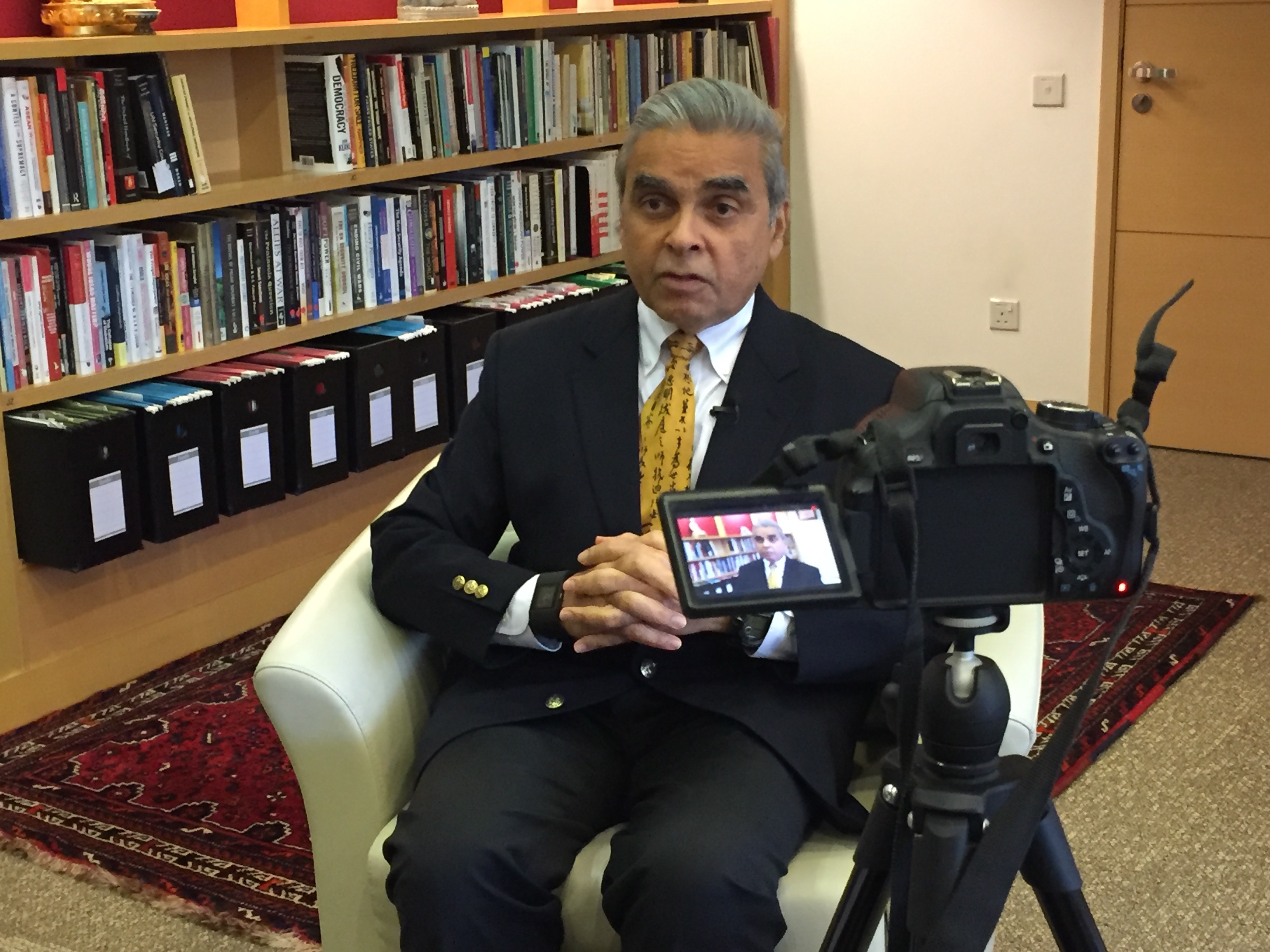 And Kishore continues to learn and read -- just check out the number of books he has, and that's just 1/3 of his books in his office. Photo by Tan Xing Qi.[/caption]Lesson 4: Pursue your passion, but be "cunning"

"Yes, they (young Singaporeans) should pursue their passion but it’s not that easy, you also got to be very cunning in choosing what passion to pursue...

So you got to be very cunning and choose your passion carefully. Make sure you pick a rising tide rather than receding tide for your career." 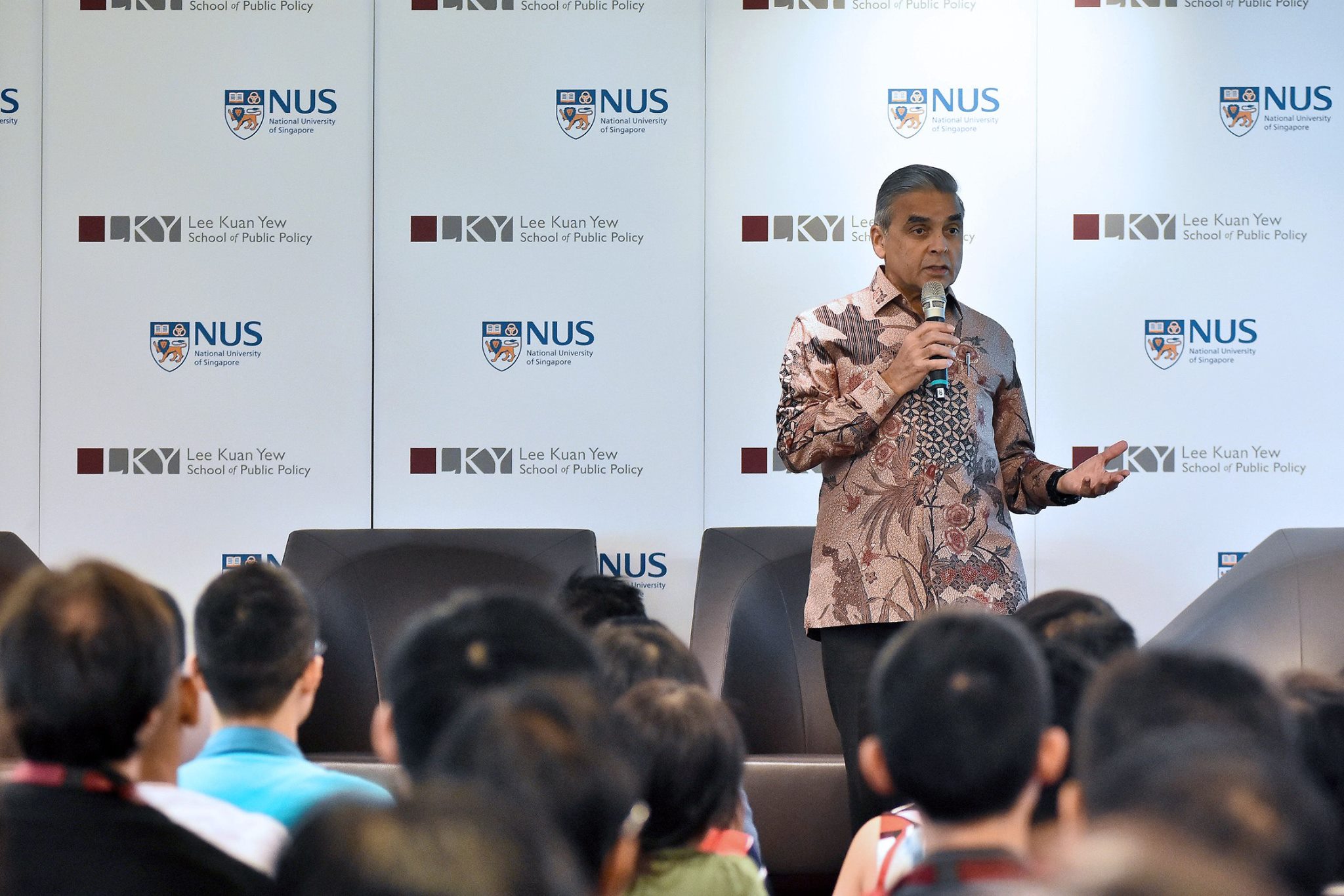 Source: Lee Kuan Yew School of Public Policy Facebook page.[/caption]"It all depends on your personality, some people are happier doing professions where they engage a lot of people other people are happy working in an area where they're by themselves. So you got to understand yourself.

And most people, I've discovered, don't know themselves. [They] haven't figured out what their real strengths are.

They're often trying to do what they think society expects of them, rather than do something that actually belongs naturally them and that they'll do well in through their effort.

So you have to find yourself first before you can succeed in the world."

And Kishore definitely sounded like someone who knows himself well as he reflected about his career and the various "demotions" that made him: Source: Kishore Mahbubani Facebook.[/caption]"On a very personal note, when you start your career, and you think of promotions. And you think that promotions are good for you.

I’ve had a good career, I’ve been promoted, I’ve become the Permanent Secretary of the Ministry of Foreign Affairs but actually I learnt more when I was demoted -- I’ve been demoted spectacularly.

But I had an incredible learning experience when I begin life as a dean, as I began to write and speak more openly both inside Singapore and outside Singapore

Every demotion I had in my substantive rank has been very good for me personally.

So I’m telling young Singaporeans -- don’t be frightened of demotions, you can keep on growing and doing well, even when you get demoted in your career."

You can catch Dean Kishore’s speech live at 10:30am this Friday here.

This sponsored post pushes Mothership writers to keep learning in this ever-changing world.