Malaysian football fans have been up in arms after it was brought to light that the semi-finals of the Asean Football Federation (AFF) Cup would be missing 21,000 seats due to an upcoming Jay Chou concert.

The singer has since responded to the situation.

Some hurled insults at the singer, asking him to leave Malaysia or reschedule the show, with others declaring that the stadium should be for sports and not concerts.

But many of Chou's fans have also come to his defence in the comments section.

Bukit Jalil National Stadium in Kuala Lumpur is the largest stadium in Southeast Asia, with a capacity of 85,000.

The sold-out football match between Malaysia and Thailand will be held there on Jan. 7, while Jay Chou's concert is scheduled take place on Jan. 15.

As large-scale installation work of the stage for Chou's performance is ongoing, a portion of the national stadium cannot be used.

Malaysia's Youth and Sports Minister Hannah Yeoh has come forward to say that this is not the fault of the singer.

Chou first booked the venue four years ago in March 2019, before he postponed the concert due to the Covid-19 pandemic.

Meanwhile, the Football Association of Malaysia (FAM) booked the stadium for AFF 2022 in August 2022.

Chou went on Instagram to address the situation on Friday night (Jan. 6).

He said he was willing to be more flexible with the timing of the show to accommodate the football match and prompted football fans to reach out to the venue to resolve the issue.

"Malaysian football fans, I know how much importance you place on football. I don’t have any issues with pushing my concert to a later time.

More importantly, ask the organiser or the venue [management] if they can allow me to start and end the concert late. It’s not a problem for me, I’m fine as long as I can sing for my fans." 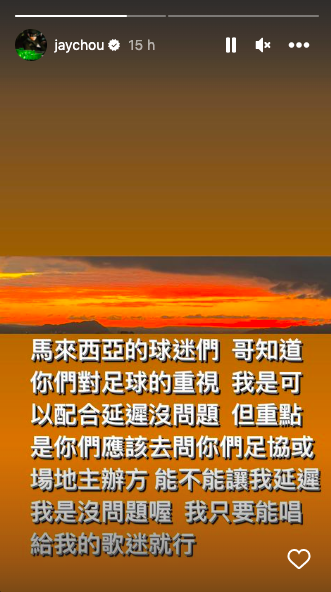 In a second story, he added that he hopes those who come to watch his concert can do so with a happy heart. 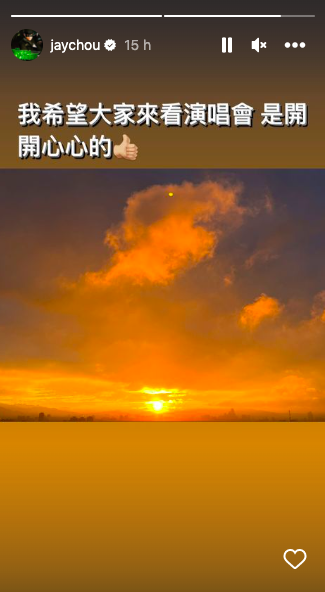