Jay Chou held the Singapore stop of his Carnival World Tour on Dec. 17 and 18, 2022 at the National Stadium.

The Taiwanese singer's last concert in Singapore was in January 2020—almost three years ago.

Fans, however, were in for a disappointment.

Post-concert, many took to social media—including Chou's Instagram page— to lament the quality of his vocals, his use of guest performers that few were interested in, and how much (or little) Chou himself actually sang.

A few also pointed out that their light sticks didn't work too, dampening the mood even further.

The Mandopop king posted to Instagram after each night's performance, commenting how "high" the atmosphere was and thanking his Singaporean fans. 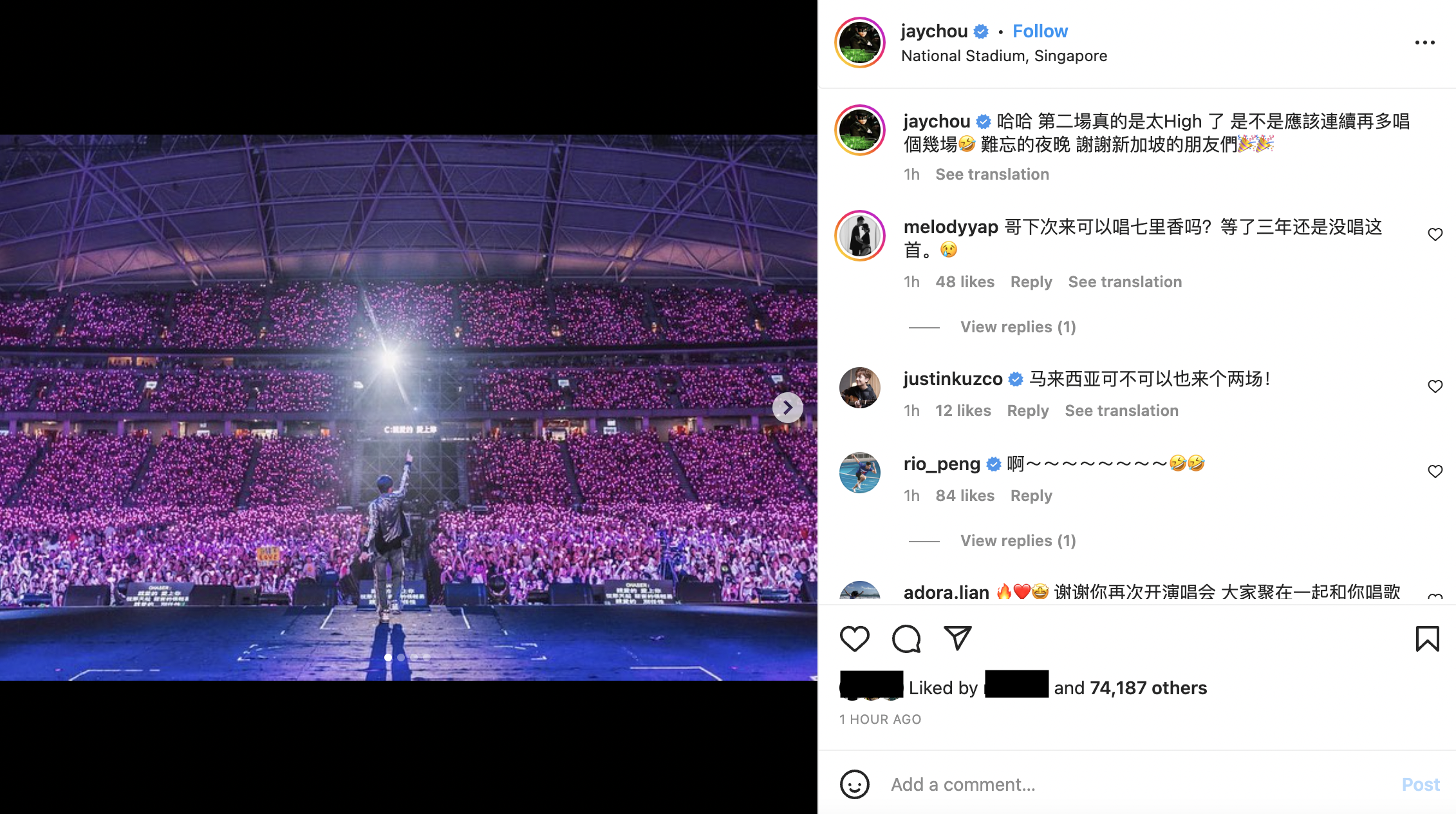 Alas, responses from the fans were not entirely favourable.

"Big brother, that few friends of yours shouldn't be on stage, it was really embarrassing. It's enough that they were on 'J-Style Trip' (Chou's reality Netflix series), but please don't bring them on your concerts, we spent good money to hear you sing, not your guests."

"If your heart is not in it, don't do [a concert]. Holding a concert with such standards just for the sake of money, can your conscience take it?"

"Can I get a refund? Even half will do, really."

A couple of the more damning sentences in the comment above read:

"Actually it doesn't matter if you leave good or bad comments, Jay Chou himself won't read it because the money is already in his pocket. [...]  The staging was perfect, but was it really worth the ticket price? Take a hard look at your conscience."

"With singing like that, forget it, I might as well go home and listen to the CD. It's a concert I regret attending the most."

"I personally feel that it doesn't matter if you can sing or not, the fans can understand your state too. But as the first show after the pandemic, it was really insincere. I was really anticipating the first Jay Chou concert of my life, but ended up being super disappointed. The problem with the light stick alone was already a big let down and a mood dampener. Looking down from the stage, don't you feel upset"

"Lots of complaints on Xiaohongshu... saying you didn't sing much, it was mostly the guests singing. And it's the same old problem, the audio was louder than your voice..."

Adding on to the criticism were comparisons between Chou and other singers like JJ Lin and Jacky Cheung.

"Previously I went to Jacky Cheung's concert and he said, 'I don't invite guests, because I know the fans are here for me.' Looking at tonight's [show], can you touch your heart and say you sang for at least an hour?"

"I'm also one of your long-time fans, and was already disappointed at your 2017 or 2016 Shen Zhen concert. I had just listened to Jacky Cheung's performance, and he was continuously singing and dancing despite his age. Gave it his all and was very professional. Went to see Jay Chou's concert afterwards, and it turned out to be a bunch of weird guests, Jay only sang a few songs. 😭😭😭 Really regret not going [to his concerts] years earlier, I can only watch it on the internet now." 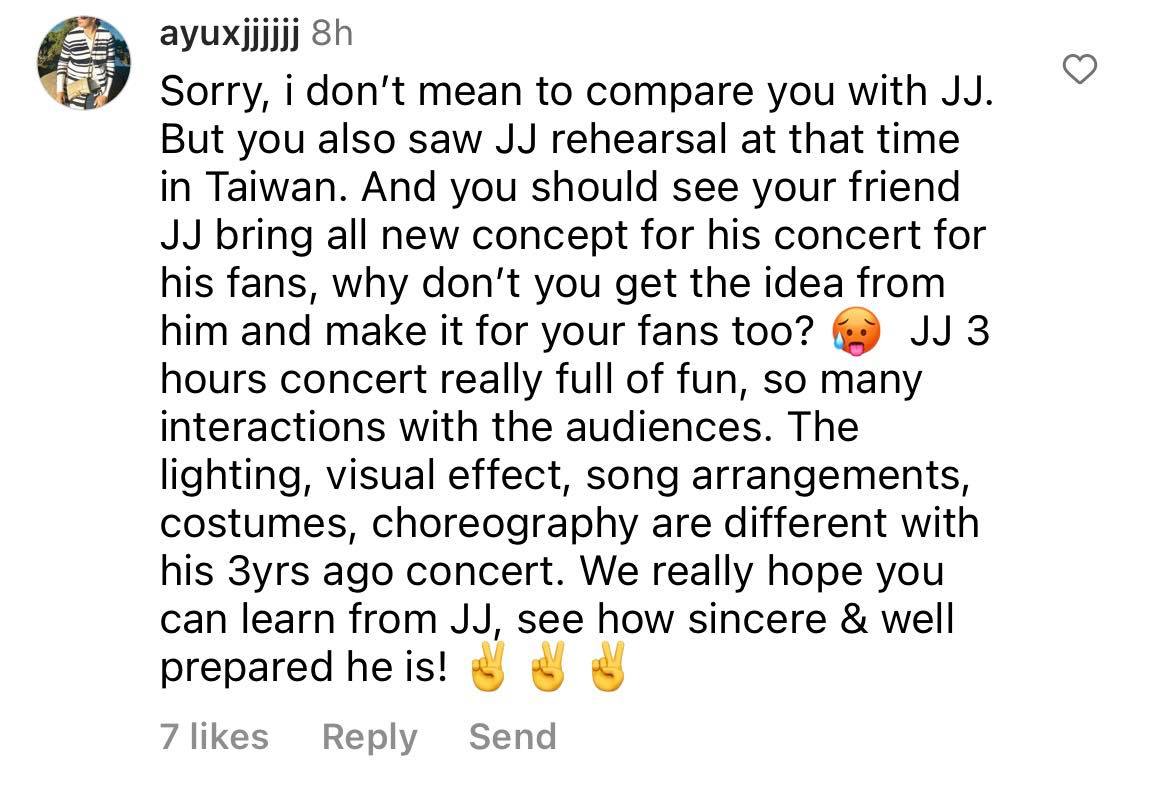 Similar sentiments were found on other social media platforms, including Twitter, TikTok, and Chinese app Xiaohongshu.

Xiaohongshu user W.美美 wrote a lengthy post detailing her unhappy experience, highlighting her dirty light stick that didn't work, the late start and abrupt end to the concert, as well as the "lousy" sound system.

"We greeted you with all our sincerity and enthusiasm, where's your sincerity? Didn't sing much for the whole concert, forgot your lyrics, voice was so soft, couldn't hit the high notes. Did you really rehearse for that many days???"

im glad even jay chou fans agree that his concert sucks. he barely sang. then the magic tricks were so extra. and theres no need for 5 loud fireworks. the lightstick was cute but so many of it wasn't working lol so many came to ask for exchange

On TikTok, an attendee said he'd rather spend the S$300 on durians, while another called it a "S$400 K-session".

There were also those who remained supportive despite their less-than-stellar experience, as well as fans who outright defended Chou.

A fan of 20 years, who had purposely interrupted her work trip in Bangkok to catch the concert, acknowledged that she was slightly disappointed, but would continue to support him nonetheless.

She said she also intends to buy a ticket for his concert in Taiwan, and asked the singer to take care of his health. 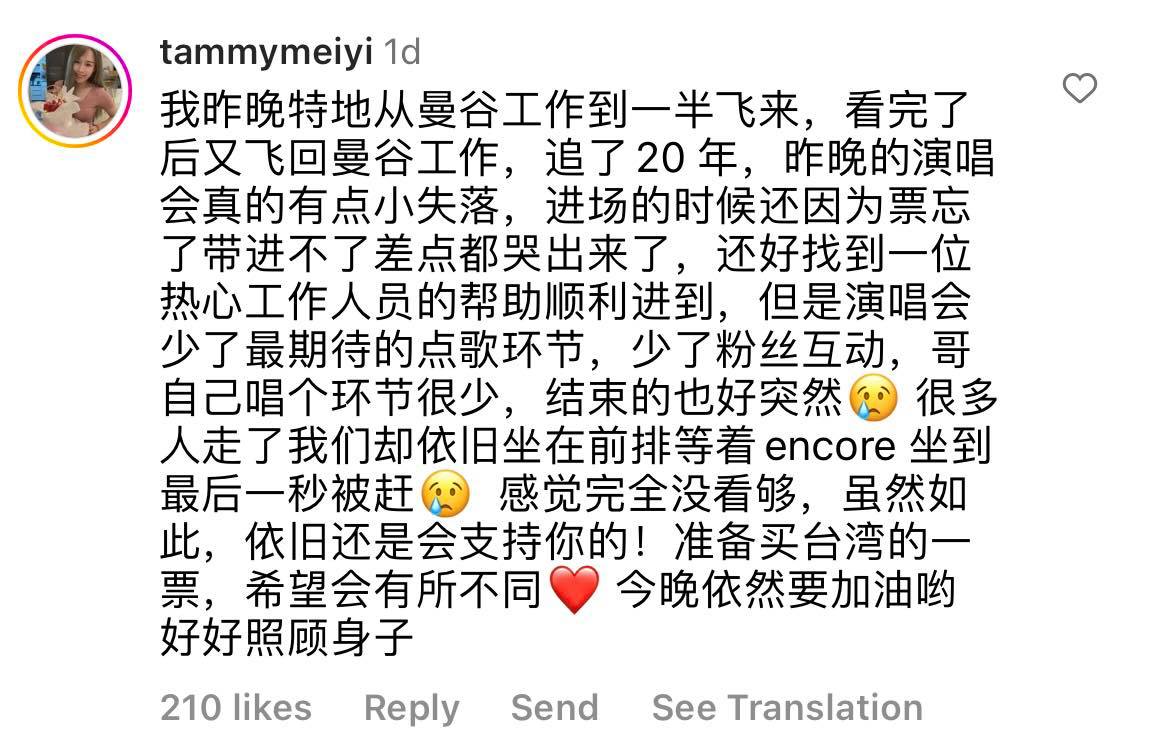 Another felt that Chou didn't sing for long enough, but conveyed it in a light-hearted tone. She also thanked Chou for preparing a brand new programme, as she thought it would be the same as his previous one.

A third commenter pointed out the singer's age (43), and argued that fans shouldn't expect him to perform at the same level he did 20 years ago.

She also felt that he had tried his best for the concert, and went into quite a rant in defence of Chou. One fan, who apparently had no issues with the concert, said that he was so touched, he cried during the show.

He also thanked the singer for being part of his youth, adding that he will treasure the memory of this concert forever.

@royalpekI am willing to take on haters for my brother Jay … 来! 😡♬ original sound - royalpek