PERSPECTIVE: On Nov. 19, Malaysians headed to the polls in the country's 15th general election (GE15).

The circumstances surrounding the elections couldn't be more tumultuous, with three different administrations having led the country since Pakatan Harapan's (PH) shock victory in 2018.

It's against this backdrop that one young Malaysian working and living in Singapore deliberated on whether she should return home to cast her vote.

"Does it really matter for us Malaysians to vote and have our voices heard when the coalition government can fall apart at any time?" said Sarah (not her real name) when asked about how she was feeling ahead of GE15.

As told to Andrew Koay by Sarah

"Initially, I was not going to go back and vote this year as I felt disillusioned by the Malaysian political crisis which started with the Sheraton Move back in 2020.

Since then we've experienced three different government in four years.

Malaysian politics can feel very chaotic, and I think it's normal to question if one vote can make a difference, especially when coalition governments appear to be so fragile. 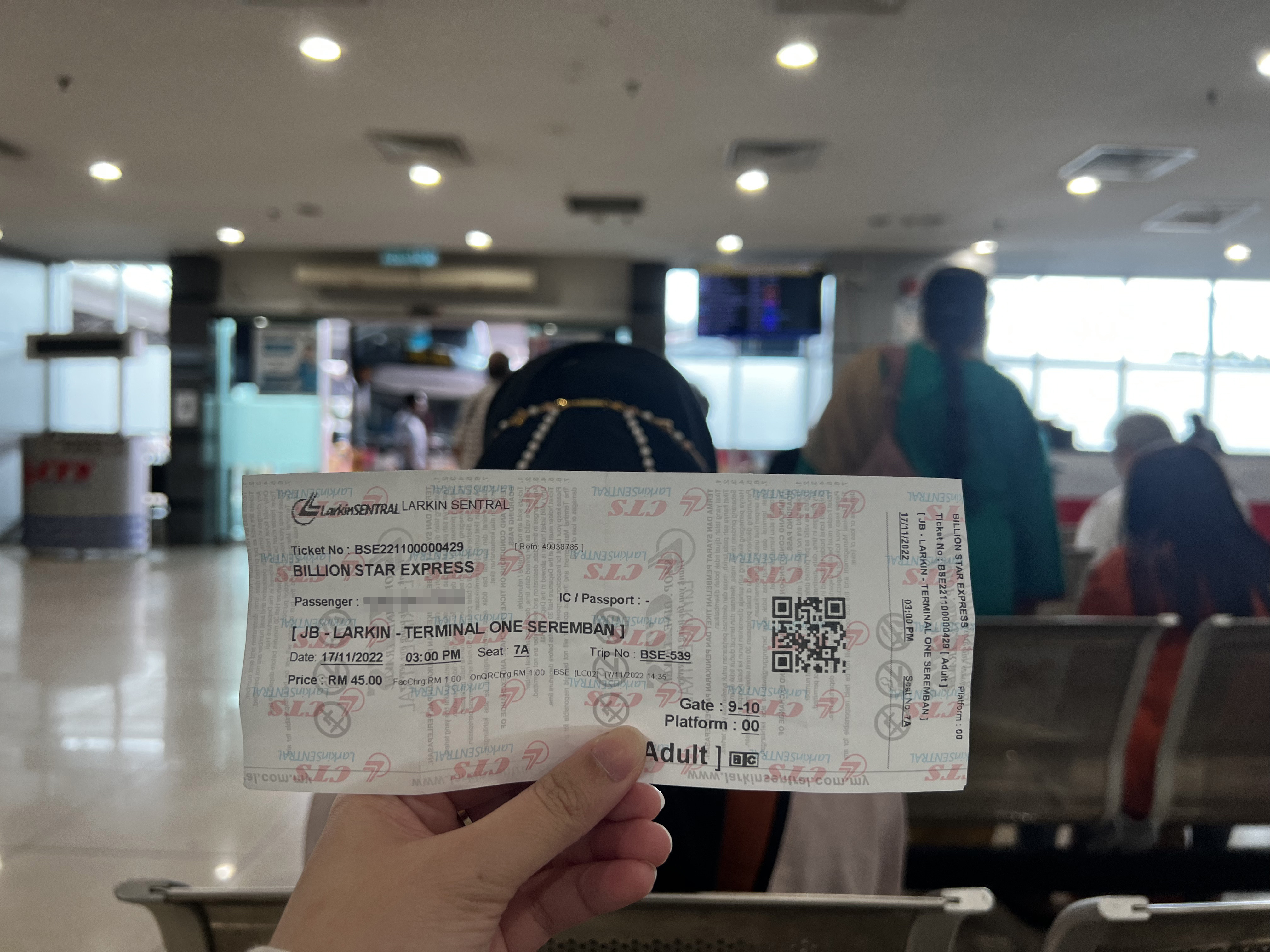 "After thinking about it for a long time, I decided that voting was an important thing to do — as cliche as it sounds, 'every vote counts'.

For me, I felt that in some ways it wasn't so much about who I was voting for, but rather the act of voting itself.

In the end, you could say I was voting for democracy.

So that's how I found myself on a bus back to Malaysia on Nov. 17."

"My constituency back in Malaysia is Segambut, which is part of the Federal Territories in Kuala Lumpur. My parents live there too.

A lot of the popular bus services were all fully booked even during off-peak hours on the weekdays. So I think a lot of people, like me, were going back to vote.

I would say the journey was fairly typical, but I remember thinking that the bus was more full than usual.

The guy sitting in front of me was on the phone and he was talking to someone about the elections; they were discussing how Nov. 18 and 19 were declared public holidays so that people could go back to vote.

Unfortunately for the man, he works in Singapore so the public holiday didn’t do him any good."

The feeling among friends and family

"My parents follow Malaysian political news quite closely — they’re able to rattle off who’s running where and what their chances of winning are.

The one thing that most people were discussing, including my parents, was Khairy Jamaluddin’s contest at Sungai Buloh which was very near our constituency.

Khairy is the (caretaker) health minister and a very prominent member of Umno, but he was facing a tough battle in a People's Justice Party (PKR) stronghold.

When my parents and I went to Sungai Buloh for dinner the night before voting, we could see that the place was way more crowded than usual — my guess is lots of people were coming back to vote!

On the other hand, I didn’t talk to any of my friends about politics. But I could tell that a lot of them were paying close attention to the political situation in Malaysia through their posts on social media.

Some of my friends vote along party lines, but there are others who pay more attention to individual candidates and what that candidate has done in their constituency."

"While I was back home, I managed to attend a political rally by PH.

My parents and I were curious because these elections are widely seen as the last chance for Anwar Ibrahim (PH's chairman) to become prime minister — a role he has long gunned for.

We wanted to see how Malaysians were reacting to PH's campaign messages too.

It was quite an eye-opening experience, mostly because of the amount of people there and the energy of the crowd.

One of the talking points that stood out to me was the mention of 'pengkhianat' — the Malay word for betrayal — in reference to the Sheraton Move that saw the PH government collapse."

"The polling station I was assigned was in a school.

Everything there was quite organised, and there was no campaigning or much political talk really.

I remember seeing a bunch of aunties sitting around and speaking — not about elections but about what their children were up to and Covid-19. It was as if they had just bumped into each other at the market.

As I stood in line, I felt calm. I already knew who I was going to vote for so there was not much deliberation in my head.

The best way to describe how I felt — and excuse me for this analogy — is that it's like standing in line at the salad bar near my office. I know what I want, and I know how to put in the order, so all that's left is to just fill out the form correctly.

In total, the whole process took about 30 minutes for me to cast my vote."

"Back home, my parents and I watched with anticipation as the results of the election started filtering through.

Normally, TV3 doesn't really get much airtime in our household because we're not that interested in their programmes, but for that one night, my dad and I were glued to the screen.

My mum was watching the elections closely on Facebook; I was worried that she would be susceptible to fake news!

The first big reaction of the night came when Nurul Izzah Anwar (Anwar's daughter) lost her seat in Permatang Pauh, Penang, which had long been held by her parents.

'Wah how come ah?' I remember my mum gasping.

My parents were also surprised at the results for Gua Musang — which had been held by Umno for five consecutive elections. You could see both on social media and in the election results that people were disappointed in BN.

For me, it was quite a shock because when I was much younger, Barisan Nasional (BN) used to win so many seats. But the way that voters are leaving BN to vote for Perikatan Nasional (PN) and PH is telling."

"I stayed up till about 12am following the election coverage.

Before going to sleep, I checked the results again and I saw that it was very tight between PN and PH.

When I woke up the next day around 7am the first thing I did was go to the official elections website to see the results. That's when I realised Malaysia had its first-ever hung parliament.

No single coalition had the required numbers to form a government."

The situation is chaotic

"In the last few days since the elections, while the different political parties negotiate with each other to form a governing coalition, I've been reflecting on the political situation in Malaysia.

To me, it feels like Malaysia is very divided — though I'm not sure how to explain it, except that the situation is very chaotic.

I hope that no matter who forms the government, they can handle the inflation issue well — just from my short trip back alone, I could see how much the prices of food had risen.

For people working and living in Malaysia — like my parents — I wonder if they can continue to bear such high prices.

But more broadly, I'm somewhat heartened to see Malaysians turn up in droves to vote; the number of citizens who cast their ballot this year exceeded how many people did so at the last elections."