A slew of measures targeted at preschools in Singapore will be pushed out progressively in the next few years, due to increased demand.

These measures build on ongoing efforts to make early education more affordable and accessible, said Minister for Social and Family Development Masagos Zulkifli at the Early Childhood Celebrations on Oct. 29.

The measures aim to better support families with young children, and attract and retain talent within the sector.

This is especially since more families than ever are sending their children to preschool, with almost nine in ten children aged three to four enrolled in preschool today, said Masagos.

According to data by the Early Childhood Development Agency (ECDA), the number of early childhood educators has increased steadily over the years, with the current workforce standing at over 23,000.

Over the next two years, ECDA will work with the five anchor operators (AOPs) to provide an additional 22,000 full-day preschool places.

This is on top of the current 200,000 spots available across all preschools in Singapore.

Of these, 2,800 spots will be set aside for infant care, while another 4,400 will be earmarked for playgroup.

This is part of ECDA's aim to allow 80 per cent of preschoolers to have a place in a government-supported preschool by 2025, a substantial increase from the current 60 per cent.

Despite increased salaries for educators, parents do not need to worry about preschool fees getting more expensive.

These include AOPs as well as preschools under the partner operator (POP) scheme. The changes will kick in in January 2023.

Around 100,000 Singaporean children will benefit from the lowered fee caps, ECDA added.

The changes are as follows:

You can refer to the tables below for the expected savings across various income groups. 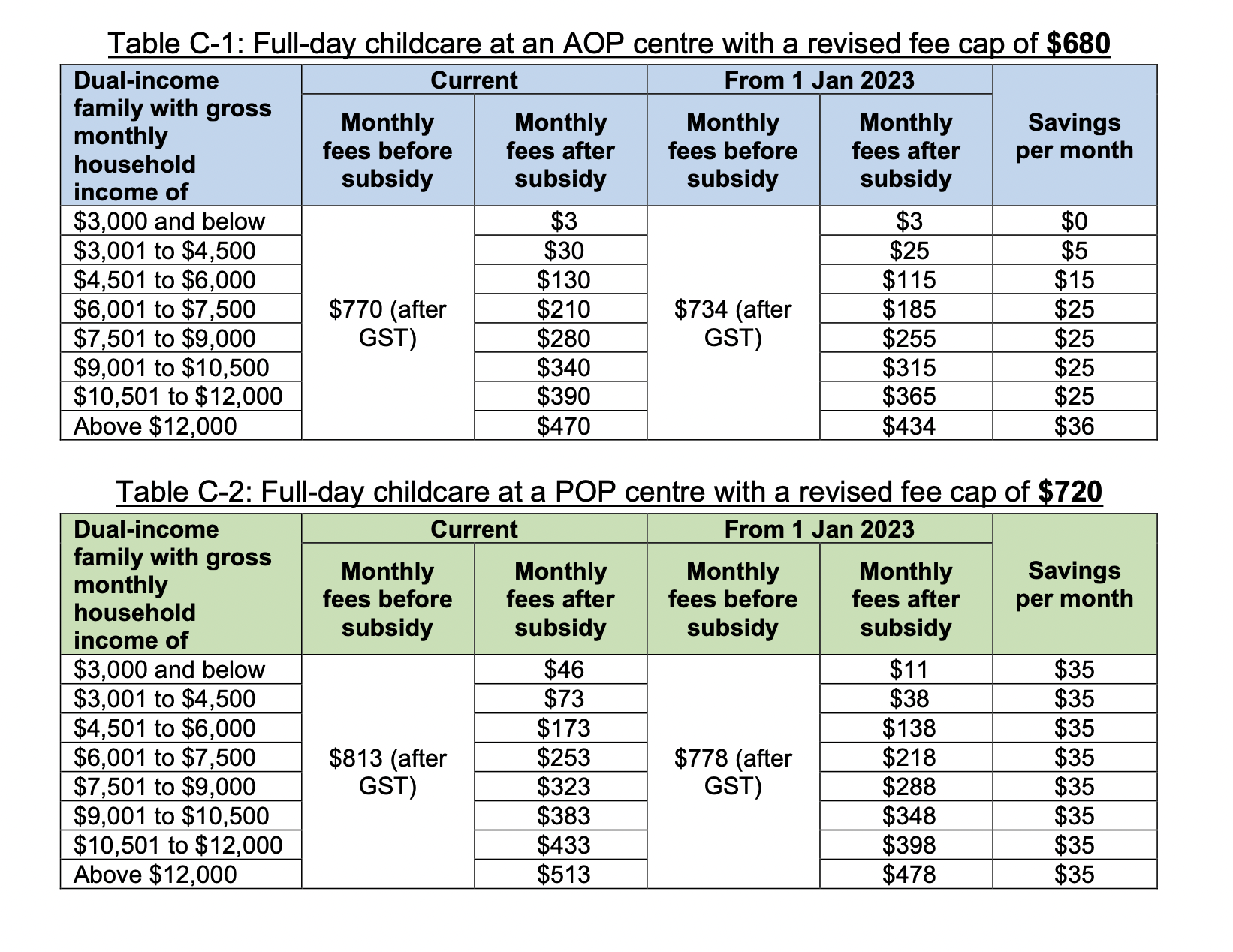 Masagos said that the government will aim to further lower fee caps in future so that families with children in full-day childcare will pay roughly the equivalent of primary school fees, plus after-school student care fees (excluding subsidies).

In particular, educators and leaders working in AOP centres can expect a 10 to 30 per cent increase in their salaries over the next two years. Better performers will receive higher increases, ECDA added.

Meanwhile, fresh graduates and new mid-career entrants with relevant certifications can expect a starting salary of at least S$2,800 a month at an AOP preschool in 2023.

ECDA added that about three-quarters of new entrants into the sector are expected to be mid-careerists.

The increased salaries are commensurate with the increasingly complex and demanding nature of the job.

For example, educators need to acquire new skills to manage a classroom of diverse learners, including those with additional needs, as inclusion in preschools is enhanced.

Educators these days also are expected to work more closely with parents and community partners.

To this end, educators can tap professional development programmes in their preschools or under ECDA.

The agency noted that the current attrition rate for educators is around 10 to 15 per cent.

Primary push factors include not having enough time to rest due to weekend shifts and after-hours work, and difficulty coping with demands from children, parents, and colleagues.

"Some educators also expressed that they did not feel adequately recognised as a professional or for their efforts in nurturing our children," an ECDA spokesperson added.

From previous surveys, educators have proposed a number of solutions, such as closing preschools on Saturdays and growing a pool of relief staff so that educators can take leave more easily.

Currently, centres are open for half a day on Saturday.

Educators frequently also have to do extra tasks, such as lesson planning and responding to parents' messages, outside of work hours.

With a mind towards establishing better working conditions in preschools, ECDA said that it will also continue to engage educators, preschools, and parents in the coming months.