Police reports have been lodged against two fitness studios in Singapore after customers and instructors discovered that they have closed down without notice.

Kyklos Studio and its affiliated brand X Fitness are reportedly run by Atlas Ang, 31, according to The Straits Times.

Kyklos Studio customers discovered something was amiss when they stepped into a deserted yoga studio on Sep. 12.

The lights were on, the equipment were ready, but the instructor was nowhere to be seen even 20 minutes into the scheduled class.

Kyklos Studio runs yoga classes at Tekka Place and spin classes at the GR.iD shopping mall, according to ClassPass, which is used to book sessions at gyms and fitness centres.

A disgruntled customer has complained online about the Sep. 12 yoga class, and that the business has remained incommunicado despite repeatedly calling and messaging the number it provided.

The X Fitness website, which is no longer available, also lists classes in Hougang Sports Hall.

Even though a refund to the affected customer was still made through ClassPass for the credits that were spent on the class without the instructor, other customers who had booked classes and packages with the studio directly were left hanging and were provided no recourse for refunds.

Another person left high and dry said she had only discovered that Kyklos Studio had shut down when she went to their Instagram page to book another class.

According to her, customers with existing packages were meant to directly message the Instagram page to book classes as the studio was migrating to another application.

The only information she could find was from an instructor who said they were also "very much shocked and confused".

The instructor apologised and said they have been trying to reach the studio since Sunday night, Sep. 11.

ST also reported that a customer was at the Kyklos Studio at GR.iD on Sep. 11 just before 11am and was likely the last person to see the business in operation.

A few minutes later, the customer received a notification on her phone that the class had been cancelled and then the studio’s doors were locked by the staff.

Before the sudden disappearance of the studio, it allegedly removed tickets for classes from its members' accounts without prior notice.

Mothership reader Stephanie said she sent the studio a message on Sep. 7 after realising that a ticket went missing in her account.

The studio responded by claiming that her ticket had already expired.

According to Stephanie, she had bought a package of 10 classes for S$120 during a sale in 2021, which was supposed to be valid for a year.

Then, in mid-August 2022, the studio migrated to a different host app.

"This caused a lot of dissatisfaction because people lost their old tickets when the owner claimed that the tickets expired, even though we know they hadn't," said Stephanie.

She is far from the only customer to face this problem, based on the studio's Google Reviews.

In the recent two weeks, numerous users have complained about a glitch that caused their tickets to disappear after a system revamp.

When queried on this, the studio told the users that there were no tickets left in their accounts as they had expired. 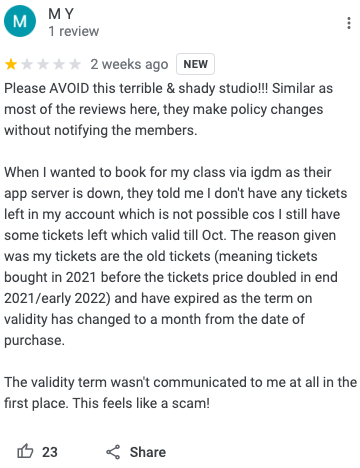 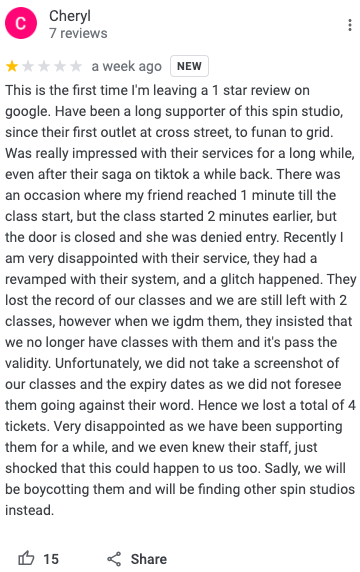 Stephanie said as of 2022, the studio's classes are typically priced between S$22 and S$25.

ST reported that several users said they bought packages ranging from S$200 to S$600, and are worried that they will not get their money back.

In response to Mothership's queries, the police confirmed that reports have been lodged. They are currently looking into the matter.

Was previously known as X Fitness and X Spin Club

Stephanie, who has been a customer at Kyklos Studio since June 2021, has made a report to the Consumers Association of Singapore (CASE).

When she first signed up, the business was known as X Fitness, which was formerly X Spin Club.

It recently rebranded as Kyklos Studio around Sep. 1, 2022, which was when they had their latest sale, she told Mothership.

She also said they are the same studio, as Kyklos Studio holds its spin classes at the previous X Fitness premises located at GR.iD #02-10, with the same instructors. 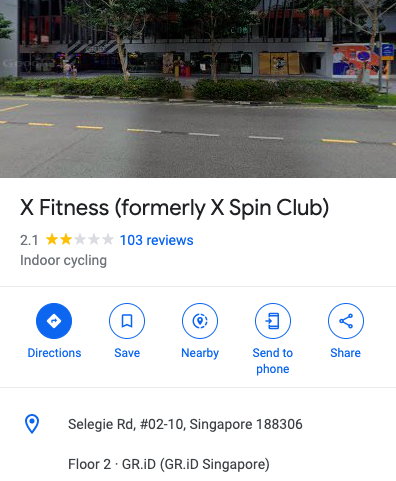 X Spin Club caused a stir in 2021 when it abruptly closed its Downtown East outlet, refused to provide cash refunds, and blocked customers from its Instagram account.

In response to Mothership's comments, Case said it has received two complaints so far:

Between Sep. 8 and 13, 2022, Case received one complaint each against Kyklos Studio and X Fitness Pte Ltd.

Consumers complained that they had unutilised sessions of fitness classes with these companies, but they were unable to book classes as the companies have ceased operations and become uncontactable. One consumer claimed that she had paid S$700 for 50 Spinning classes from X Fitness, but she was unable to access the Kyklos app to book her classes.

Case had informed these consumers on their avenues for recourse, including the option to file their claims with the Small Claims Tribunals.

As much as possible, Case advises consumers to avoid making huge sums of prepayments upfront for pre-paid packages, as it is challenging to seek refunds for unutilised package sessions if the company suddenly closes down or becomes insolvent.

Consumers are advised to check the credibility and track record of the company, and understand clearly the cancellation and refund policies before signing a fitness package.