Two drinking buddies in Choa Chu Kang got into an altercation after they both got drunk and things got rowdy.

The series of events then got more serious and violent after the son of one of the men, in a bid to stand up for and defend his father, allegedly attacked the other man with a knife.

A 37-year-old man was reduced to a bloody mess as a result.

The incident took place on Aug. 3 at around 8pm at the open area at Block 141 Teck Whye Lane.

The Singapore Civil Defence Force was alerted at 8:10pm and one injured person was conveyed conscious to hospital.

A Shin Min Daily News reporter arrived at the scene to find that the wounded man had been taken away.

The area the alleged attack took place was covered in blood. 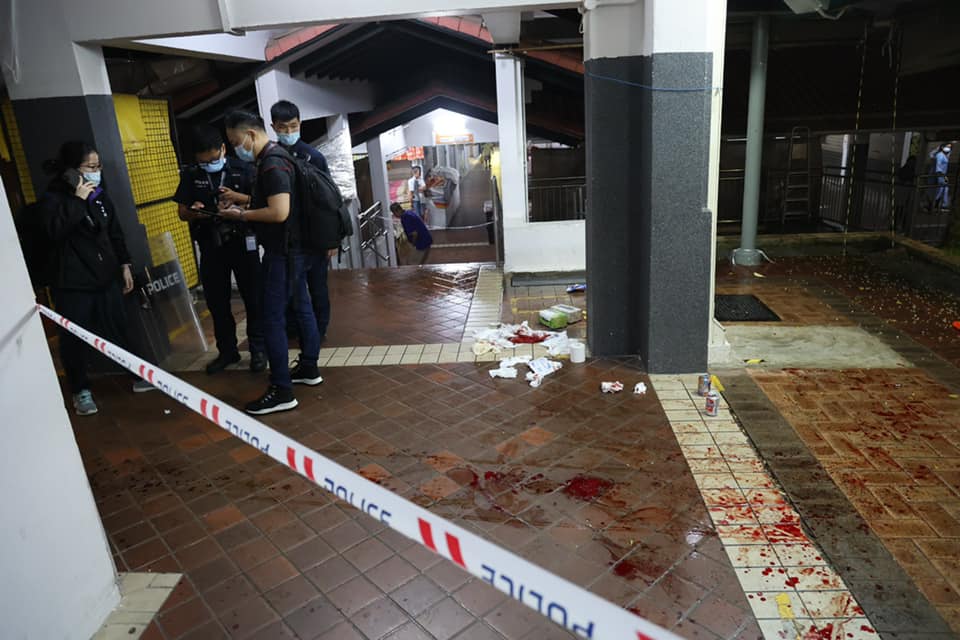 Also present at the scene was a towel and two bottles of beer.

A pair of police officers were seen recording statements.

An eyewitness told the Chinese newspaper that a group of people had been drinking from morning till night.

One of the drinking buddies, identified only by his surname Lin, shared that each person consumed about 20 bottles of beer each.

The older men, who are party to this altercation, are frequently seen in the Teck Whye area drinking from as early as 8am till late, and would often get into arguments.

According to another eyewitness, who was watching people play Chinese chess in the area, he heard two men shouting amidst a commotion that suddenly erupted.

However, just as both men appeared to be done with their exchange, a younger man suddenly joined the fracas.

The eyewitness said he also saw a woman try to stop the younger man who was armed with a knife, but as the scene was chaotic, the intervention failed and an older man in a white top and black pants was attacked.

The victim was hacked on the head, eye, and waist, and appeared to have lost a lot of blood.

Those at the scene called the police and attended to the injured man.

The assailant allegedly fled the scene before the police arrived.

Another man, who claimed to be the neighbour of the injured man, said everything happened too quickly for him to react at that time, and he could not even get the victim out of harm's way

The injured man sat along the sheltered walkway and waited for assistance, all the while bleeding, after the alleged assault.

The father of the assailant was also allegedly injured during the fracas.

He left the area after the alleged altercation took place, but not before leaving a trail of blood from the scene back to his own home at a nearby block of flats at Block 9 Teck Whye Lane.

The trail of blood stretched some 180m, and blood pooled on the ground in the lift.

One woman, who was part of the drinking group, was seen lying on the ground, wailing, crying and making a lot of noise after the incident happened.

This led to the police and members of the public to haul the woman off the wet ground as it was raining that time.

She is believed to know the assailant's father and the injured man.

In total four people were arrested, the police confirmed with the Chinese media.

Those arrested allegedly included the assailant, along with his family members and friends.

The other two people arrested, one man and one woman, are believed to be the duo's loved ones.