The manufacturer of Snickers has apologised for an advertisement that referred to Taiwan as a country.

According to the Wall Street Journal, Snickers had been promoting a collaboration with South Korean boy band BTS, which included an online event.

A website for the collaboration wrote that attendance for the event was "only available in the following countries", and displayed — amongst others — an image of the Taiwanese flag.

The geopolitical faux pas sparked outrage and threats of boycotts in China after several nationalistic influencers shared about it on Chinese social media site Weibo. 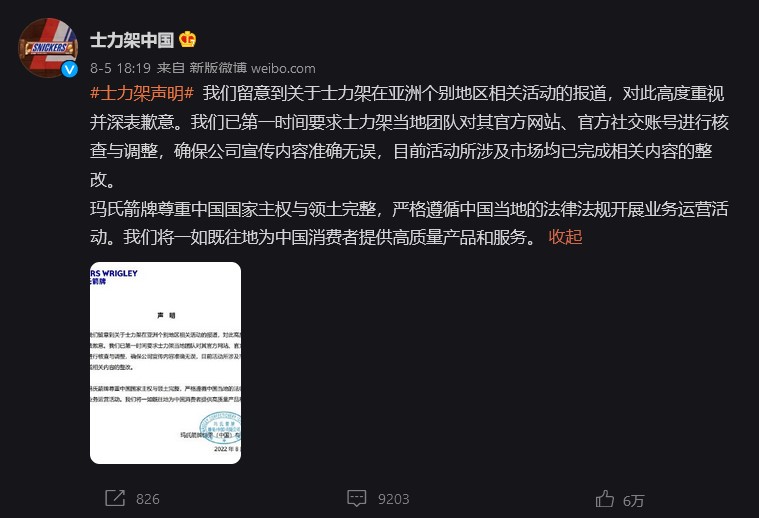 "We are aware of the report about Snickers’ activities in some regions in Asia, and we take it very seriously and apologise for it," said Mars-Wrigley in a statement.

The second apology, posted about two and half hours after the first, added that "Taiwan is an inalienable part of China's territory", and that there is only"one China" in the world. 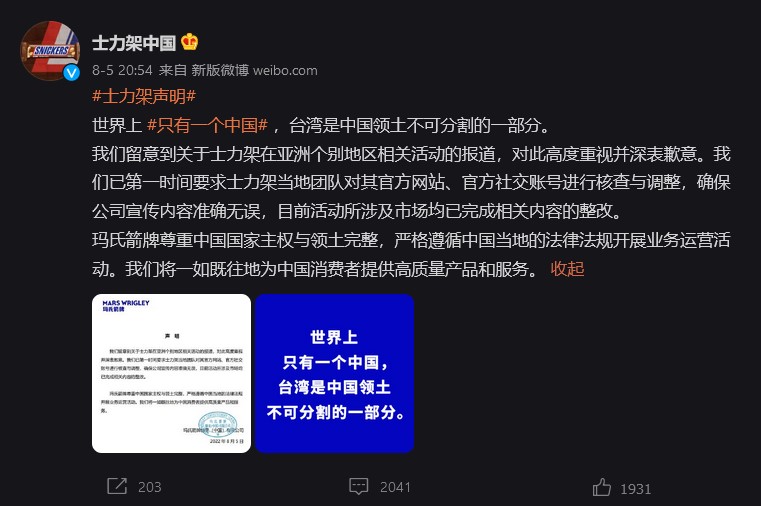 Tensions on the rise after Pelosi's visit

The marketing blunder comes as tensions between Taiwan and China continue to rise in the wake of United States House Speaker Nancy Pelosi's visit to the former.

The self-ruled island is claimed by the Chinese Communist Party (CCP) government in Beijing as an integral part of China, and is regarded as a renegade state.

The CCP has on multiple occasions said that it intends to unify both sides of the Taiwan strait, and has not ruled out the use of force to do so.

Pelosi called her visit a show of American solidarity with Taiwan, reported the Wall Street Journal.

In retaliation for her visit, China launched six live-fire drills in the waters around Taiwan on Thursday (Aug. 4), unsubtly sending the message that it has encircled the island.

Such actions are likely to only be the start of escalating punitive measures according to Chen Ching-Chang, a professor of International Politics at Japan's Ryukoku University.