United States Speaker of the House Nancy Pelosi has touched down in Taiwan at around 10:45pm on Aug. 2 (Singapore time), according to a live feed shared by Reuters, after making a quick stop in Kuala Lumpur. 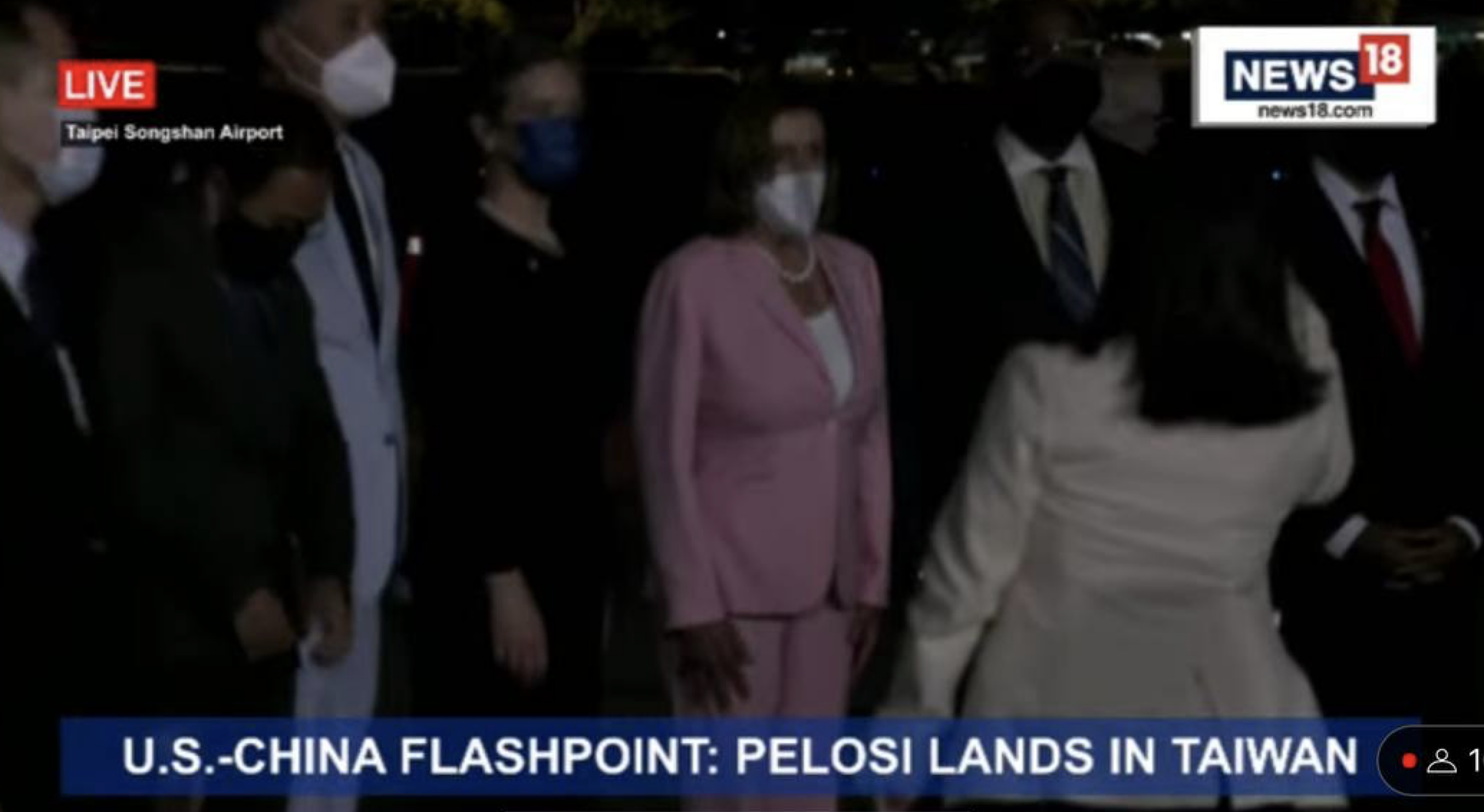 Pelosi, who is the leader of the U.S.’ legislative branch and the second in line of succession to the U.S. presidency, is on a multi-leg Asia visit.

She kicked off her Asia trip by first visiting Singapore over Aug. 1 to 2, before making a flying visit to Malaysia, and is scheduled to make stops in close U.S. allies South Korea and Japan.

She did not spend a full day in Kuala Lumpur, arriving and leaving on Aug. 2.

En route to South Korea and Japan, she added an unscheduled stop in Taiwan.

It was strongly speculated that the US Air Force-operated Boeing C-40C that took off from Kuala Lumpur, "SPAR19", is the plane carrying Pelosi, despite there being no official confirmation, according to Bloomberg.

Public interest over the flight was so strong that at one point, over 300,000 people were tracking it as it took a circuitous route to Taiwan, flying over Borneo, likely to avoid the South China Sea, a disputed area where China has militarised three islands.

Aircraft-tracking site FlightRadar24 was reportedly down for several users due to overwhelming web traffic.

Because of unprecedented sustained tracking interest in SPAR19, Flightradar24 services are under extremely heavy load. Some users may currently experience issues accessing the site, our teams are working on restoring full functionality to all users as quickly as possible. pic.twitter.com/dsFrlQ67zr

Speculation has been rife since the trip was originally planned in April 2022 that she would make an unannounced visit to Taiwan. When it was announced that she would resume her travel plans in August, there was immediate speculation that she would add a Taiwan stop to her trip.

According to CNN, she is expected to stay overnight in Taiwan, and Bloomberg reported speculation that Pelosi would meet Taiwanese President Tsai Ing-Wen on Wednesday (Aug. 3), although that is yet to be confirmed.

Taiwan, a core issue that China is unwilling to compromise on, is often a source of tension for China and the U.S.

The self-ruled island is claimed by the Chinese Communist Party (CCP) government in Beijing as an integral part of China, and is regarded as a renegade state. The CCP has on multiple occasions said that it intends to unify both sides of the Taiwan strait, and has not ruled out the use of force to do so.

China has voiced its opposition to Pelosi’s visit, claiming that it would embolden the voices advocating for Taiwanese independence, with which it associates Taiwan’s democratically elected president, Tsai (although Tsai is arguably pro-status quo rather than pro-independence). It has further warned of “firm and strong measures” if the visit went ahead, but has not specified what those measures are.

However, hawkish voices within China has threatened serious escalation. Hu Xijin, the former editor-in-chief of the fiercely nationalistic publication, the Global Times, tweeted that he thought that deploying China’s military jets to obstruct Pelosi’s visit would be acceptable, even mooting the possibility that Pelosi’s aircraft might be shot down.

According to Reuters, Twitter decided Hu’s tweet had violated its rules and locked his account, requiring him to delete it. Twitter’s platform is banned in China.

China, for its part, has not sat on its hands. Over the weekend of July 30 to 31, just before Pelosi’s Asia trip started, it put out a major show of force. According to Nikkei, the People's Liberation Army, China's military, held live fire exercises in Fujian, the province closest to Taiwan.

According to Bloomberg, it has followed that up with fighter jets flying close to the median line that divides the Strait of Taiwan.

Taiwan’s Defense Ministry has, for its part, stated that the Taiwanese military was “determined, confident and capable of ensuring national security”. It also held military exercises on July 29.

On the last night of #HanKuang38 exercise, #ROCArmedForces conducted an anti-airborne/anti-heliborne operation in Songshan AFB. #MP, #ROCAF's AAA and garrison units, as well as #ROCArmy's soldiers, acquired valuable experience in such drills based on realistic situations. pic.twitter.com/KvWthQRAsY

In a phone call between China’s President Xi Jinping and U.S. President Joe Biden on July 28, Xi apparently warned Biden that China’s territorial integrity was “the firm will of more than 1.4 billion Chinese people”, and that the “will of the people cannot be defied, and those who play with will perish by it.” He also added that he hoped the U.S. would be “clear-eyed” about China-Taiwan relations.

China, and particularly the CCP, has had a long history of hostility with Pelosi specifically. On a 1991 visit to Beijing, Pelosi and two other U.S. Congressmen broke off from their security detail to unfurl a banner in Tiananmen Square to commemorate the students killed two years earlier.

Two years after protestors were met with violence & death, I joined my colleagues in unfurling a banner in Tiananmen Square which read: “To those who died for democracy.”

To this day, we are firmly committed to standing up against China’s abuses of human rights. pic.twitter.com/JFdPoVNmpr

Her visit would represent the most senior American official to visit Taiwan in 25 years, when fellow Speaker Newt Gingrich visited Taiwan. However, it has been said that China views the fact that Pelosi and Biden are of the same Democratic party represents coordination at the highest level, and thus the visit is an escalation.

A White House official meeting with the press after the July 28 call, said that the legislative branch, which Pelosi led, was a “separate and coequal branch of government”, implying a lack of such coordination.

Now that Pelosi has landed it remains to be seen what further action China will take. However, it is clear what one American commentator thinks must be on Pelosi’s agenda.

The best decision Pelosi can make on her Taiwan stop is to visit the original Din Tai Fung. McCain wasn’t above it. In 2016 we grabbed Din Tai Fung to go after our 4 hour trip to Taipei. Ate it on the way to Tokyo.