Sometimes when you gotta go, you gotta go. Or at least that appears to be the mantra of a man in VivoCity recently.

A video sent in by a Mothership reader showed an individual bare-bottomed and seemingly defecating along one of the shopping mall's walkways on Jun. 28.

"As me and my friends were walking around in VivoCity, the mall, we saw this man talking a dump 💩 in the open and leaving it there in a plastic bag for someone to clean it," said Instagram user _Z_Lunar — who lists his name as Aki — in a message.

Aki said the incident occurred at about 4pm outside a Yakiniku restaurant on the second floor and that the man appeared to be at the tail end of his business at the time.

In the video, he could be seen crouched over with his pants below his knees while several plastic bags lay on the floor beneath him.

The man seemed to be reaching toward the bag, though it was unclear why he was doing so.

A second video sent in by Aki was taken after the man left; brown spots could be seen on the ground beside a red plastic bag. 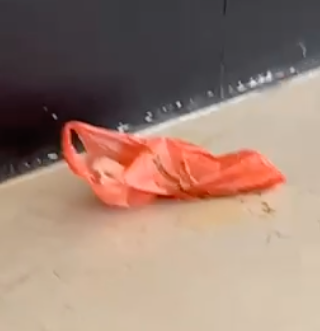 "Dude just left his sh*t in a bag," a voice can be heard exclaiming.

Responding to Mothership's queries, the Yakiniku restaurant said that they were not aware of the incident.

"We also did not receive any messages or comments from members of the public/diners regarding the incident," said the restaurant.

Was later seen walking around with doughnuts

"After he left the scene, he was acting pretty normally," Aki said.

Aki added that he did not stay to see if anyone cleared the mess.

"I left the site after I took the video as I found a disturbing."