A woman in Singapore, who was looking for something economical to fill her tummy, was left reeling and hard done after she was charged S$15 for a takeaway packet of rice with green leafy vegetables and curry chicken.

A photo of the unexpectedly expensive food and accompanying complaint written in Chinese was put up on Facebook by the customer on July 2. 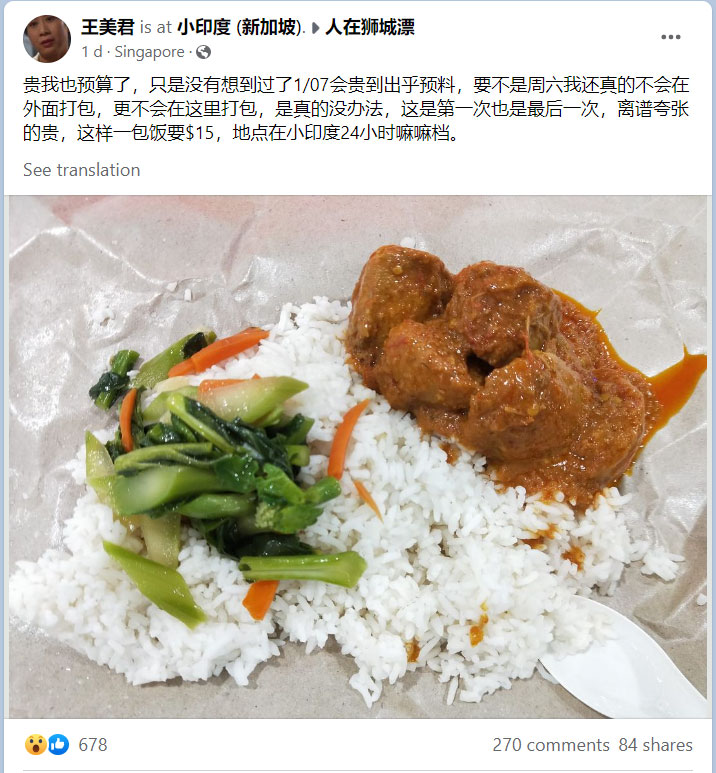 No other choice at that time

According to her, the eatery that she visited was a 24-hour establishment and she settled on that place at that time due to a lack of choice.

She lamented that she already had a budget in mind, but was shocked when the bill came up to S$15.

Details of her complaint are scant, as she did not mention which eatery she patronised.

However, the woman was active in responding to queries from others who commiserated with her.

In response to a comment on the post, the woman acknowledged that the food was delicious, but asked if it was worth that expensive price.

One commenter said S$15 for chicken is definitely overpriced.

In response to another commenter, who asked if the customer had asked the eatery if the price was correct, the woman replied that she even asked twice to confirm it was indeed S$15.

The woman also said in her complaint that this shall be the first and last time she visited that eatery.