A man in Singapore shed a third of his weight over the course of eight months.

The man, Terence Koh, describes himself currently as a "fitness enthusiast" in his newly-created TikTok profile.

Here's a timeline of his weight loss from February to September 2021:

Wanted to lose weight to be 'healthy dad' for his son

Koh said his main motivation was his son, as he wanted to be a "healthy dad and role model".

His weight loss journey thus began before his son was born.

A photo of him at the start of his journey, taken in February 2021, showed his side profile with his pregnant wife for contrast.

Koh shared that he went through "hungry and sleepless nights" after kicking his supper habit, and endured months of daily muscle aches from exercising six days each week.

He shared that by July, he "finally" passed his Individual Physical Proficiency Test (IPPT), completing the 2.4km run in 11 minutes and 52 seconds.

Apparently, it was the first time he passed IPPT after 10 years.

Welcoming his son into the world, Koh also marked the milestone of delivering on his promise to be a healthy dad.

Koh said he received negative comments from others, including some who said he wouldn't be able to sustain his strict diet and exercise regime for long.

"You will turn fat again soon," he recalled others saying.

But he said his regime had "become a lifestyle" for him.

"I have never felt so rejuvenated before. I am healthier, happier, and I have much more energy," he shared.

"Now I am definitely in better shape than those who made fun of my weight," said Koh.

How he did it

Replying to comments on his TikTok posts, Koh shared his tips for weight loss.

"Take small steps, create positive habits & routine, follow it and make sure you are consistent with it!" he said.

He shared that he would exercise three times each week when he just started out, and began with walking, as well as "functional exercises like pushups, squats etc.", before progressing to jogging and training with weights.

Thus, he switched to doing more weights training instead. 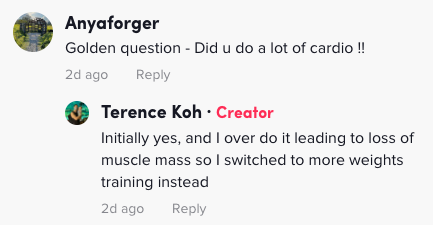 He has since progressed to working out six to seven times each week, and says his next goal is to build more muscle.

This would also help to "fill up the excess skin" and counter the stretch marks he now has. "Healthy diet is the key!" he added, saying that a caloric deficit (eating less calories than one expends through exercise) if the goal was fat loss.

He shared that he still indulges in fried food once in a while, "to keep [himself] happy".

"Consistency above all," said a caption on one of his videos.

Here's Koh's video capturing the different stages of his journey:

Top image via Terence Koh on TikTok and Instagram