Hundreds of birds are seen flying around in the sky in unison each evening in the Choa Chu Kang housing estate, a scene familiar to residents, but still inspires awe and wonder for those seeing it for the first time.

Shin Min Daily News reported that the vicinity the birds appear is around Block 416 and Block 431 at Choa Chu Kang Avenue 4, based on clues of a video showing the birds in action.

Residents, who are used to the scene, said the birds, red-breasted parakeets, will appear for an hour, but they will not fly into homes.

One 53-year-old resident said she has seen the birds over the past 30 years.

The red-breasted parakeets will fly around at 6:30pm and then go quiet when it goes dark.

They will be seen again at 8am in the morning.

She said: "I don't find it annoying, I'm used to it. They never fly into the house. I don't think there is any problem. I occasionally come out to watch birds."

Roosting on trees in urban areas

According to a reporter at the scene, the birds, which are green, yellow and red, can be seen resting on the parts of the trees that lack leaves.

Shin Min reported that the birds are not migratory and are on the trees to roost for the night. 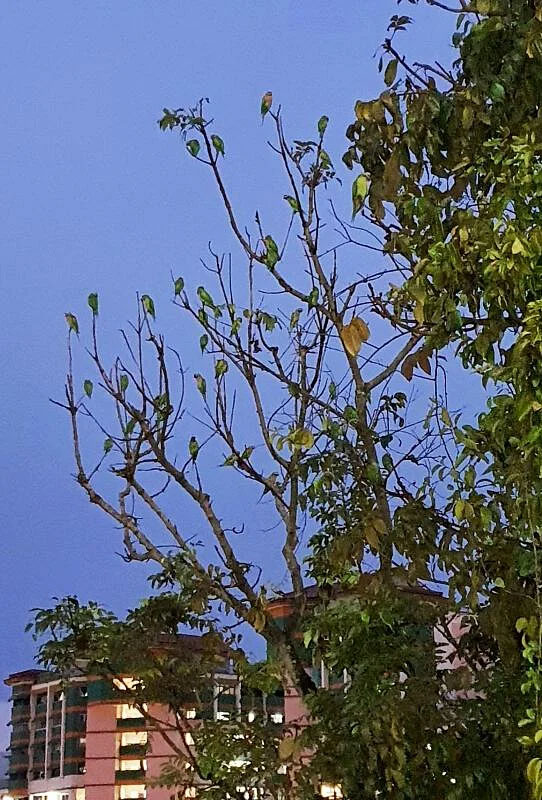 They are categorised as near threatened species.

According to SingaporeBirds.com, the male parakeet has overall green plumage with distinct pink breast and belly, grey head, blue uppertail, green tail tip and red upper bill, while the female parakeet is similar to the male, but has duller pink underparts and black upper bill.

They can also be found in large numbers in Changi Village and Clementi.