If you ever bought produce off the shelf with teeth marks in them, that's because something else got to it first.

In the case of a ear of corn on display at the Giant supermarket at Block 683 Hougang Avenue 8, a rat was clearly having its fill before any shopper did.

A video of a rat munching away at corn was shared online on July 18.

And its face said it all, as it sat in the crate taking bites and looking up, as if it has met its dietary requirements for the day and not having to go back to eating trash. 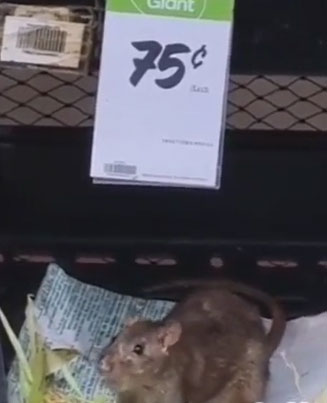 Off-camera a woman could be heard saying: "Looks like very delicious."

Comments left on the video also did not express outrage, as those who responded said the rat was just having a meal and it reminded them of Remy the rat from the animation, Ratatouille.

Not all rats are so lucky though.

Previously, in May, a rat was found dead in a packet of vegetables purchased at Giant's IMM outlet.

Animals having a taste of supermarket fresh produce is not uncommon.