A school counsellor at Hwa Chong Institution (HCI) had shown content that is discriminatory to the LGBTQ+ community in a recent assembly talk.

The counsellor has been suspended from delivering further sexuality education lessons.

A tip off to Mothership included photos taken of the presentation slides that were shown to the entire cohort of Secondary 4 students by a counsellor during the talk on Jul. 13, 2022.

Some statements shown to students include "1 in 5 homosexuals is a pedophile"and "58% of homosexuals have problems with intestinal worms", for example. 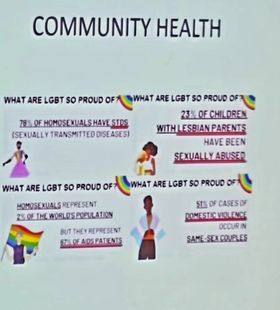 Students were also allegedly shown a video that featured a man explaining how his faith has changed his attitudes towards homosexuality.

The incident caused some students to feel uncomfortable which led to the school to follow up with an engagement session to address students' concerns on Monday morning (Jul. 18), according to a screenshot of an email sent to the students.

A HCI spokesperson confirmed that the school is aware of the incident which took place during a presentation on sexuality where a staff member incorporated content outside the scope of MOE’s Sexuality Education curriculum into his slides.

"The views presented were the individual staff’s personal perspectives and not representative of the position of the school or MOE," the spokesperson added.

The staff member has since been "reprimanded" for delivering content that hasn’t received the school's approval.

He has been suspended from delivering further sexuality education lessons, the HCI spokesperson said. It’s not certain how long this suspension will be.

"We take a serious view of this incident and have met up with our students to address their concerns. To ensure that such incidents are not repeated, we will also review our processes," the HCI spokesperson said.

Top image from Mothership reader and via Wikipedia