Were you feeling kind of chilly all of a sudden in the evening of July 29, 2022, the first day of the Hungry Ghost seventh lunar month?

Well, you were not alone.

Temperatures across Singapore did indeed plunge by a few degrees Celsius at dusk on Friday, compounded by heavy rains and strong winds over most, if not all, parts of the island.

Temperatures hit a low at dusk

According to the Meteorological Service Singapore, temperatures just before 7:30pm in Admiralty, located in the northern part of Singapore -- which was the coolest region on the island at that time -- fell to 22.9°C. Closer to the central part of the island, temperatures in Ang Mo Kio, while slightly higher, was still relatively low at 24.3°C.

Sembawang had by that time at 7:30pm, received more than 40mm of rainfall.

Strong winds were also felt across the island.

While more rain fell in the north, with Mandai recording 46.2mm of precipitation, strong winds lashed the south of Singapore. 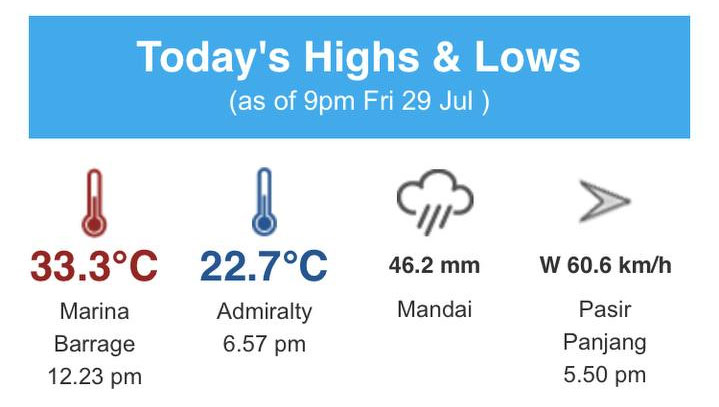 Videos of the windy conditions were uploaded to social media.

The lowest temperature of 22.7°C was recorded at Admiralty at 6:57pm.

July 29, 2022 marks the first day of the seventh lunar month of the Chinese calendar.

It is the start of the Hungry Ghost Festival month.

Those who observe the occasion prepared food offerings and burn incense, candles, and joss paper, also known as paper money, on the first, 15th and last day of the Ghost Month, which fall on July 29, Aug. 12 and Aug. 26, respectively.