Is Singapore's Chinatown the dirtiest place in Singapore?

Well, according to a person from China who is in Singapore, the answer is "Yes, very likely".

A TikTok video put up on July 16 by a student from China, who is currently residing in Singapore, provided a hot take on the state of Chinatown here.

@zeinsg Why Singapore’s Chinatown so dirty? That is insane! Is there most unclean place in Singapore? #singapore #chinatown ♬ original sound - 阿泽在新加坡

Here is a translation of what the student said in the video in Mandarin:

This could be the messiest and dirtiest place in Singapore.

I came to Singapore's Chinatown recently.

Following the reopening after the pandemic, it got more congested, and the hygiene level has become intolerable.

I can't imagine how this area is still considered part of the world-renowned garden city.

Every country will have areas that have shortcomings in cleanliness, which can be challenging when trying to maintain a certain level of hygiene, but Chinatown in Singapore is beyond just a shortcoming in hygiene standards.

In Singapore, Chinatown here has become synonymous with dirty and messy.

Previously, I was living in New York, Chinatown in Manhattan has also come to represent mess and rubbish.

Chinatown is actually a window for people to understand China.

It is a place for overseas Chinese to interact with one another and feel at home.

It is a place of significance in the hearts of Chinese.

My friends from school will hang out in Chinatown to eat as the cuisine and delicacies are authentic.

To see Chinatown in Singapore become a degraded and dirty environment, I do not understand.

I only have one saying to go by: When overseas, let us be conscious of our own behaviour.

The video showed scenes of Singapore's Chinatown and the state of its public walkways, open spaces, eateries, and hawker centre.

The sights were not pretty and appeared chaotic. 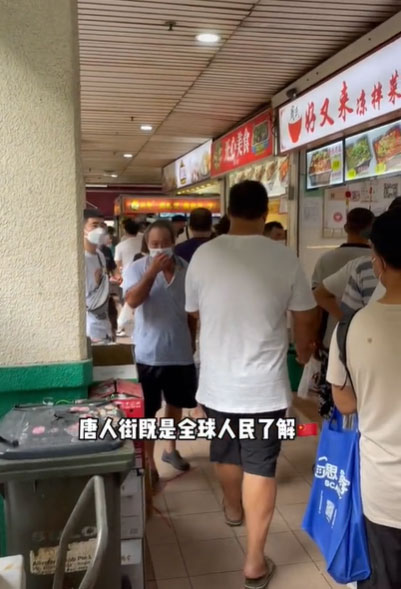 Besides general litter on the ground, the video showed used plastic cups with straws placed on the sidewalk with a discarded mask and napkins stuffed into them, as well as cigarette butts. On the ground at an eatery were discarded glass bottles, plastic bags, and utensils. An appeal to fellow Chinese

The video's appeal to fellow Chinese to mind their habits drew strong responses.

Many of the comments expressed disappointment at the state of Chinatown here and singled out the culprits.

The highest rated comment read: "You know who are the culprits. Habits and character are hard to change even after leaving behind your homeland." ["你应该知道是哪个做的。习惯、性格。。。就算离乡背景也改不了。"]

Singaporeans who have been to Chinatown here will note that it is a favourite haunt of some locals as well.

As to whether the video maker was also appealing to local Chinese to mind their habits, he did not explicitly say so.

And if that was his intention, it appeared vague, as he was talking about Chinatown's significance everywhere in the world for overseas Chinese.