A video shared on the Chinese platform, Weibo, shows a woman being punched, kicked and dragged at a restaurant in Tangshan, Hebei Province on Jun. 10.

This was after she pushed away a man who had tried to put his arm around her.

In the four-minute video, a man in a green hoodie can be seen approaching a table with three ladies having their meal.

He then touched a woman, who was wearing a white t-shirt, on the back. She immediately pushed his hand away.

Seconds later, he advanced toward her again, and the woman pushed him away again and shouted at him.

The man then swung his fist towards her face and punched her in the mouth.

Her friend in the black dress got up and hit the aggressor in the head with a beer bottle to protect her friend, the man then turned towards the lady and pushed her to the ground.

The man's friends also started hitting the woman in the black dress who was already on the ground. As another lady attempted to help her friend, a man grabbed a chair and swung it toward the ladies.

A group of about three men was involved in the commotion.

The group later dragged the woman in the white shirt by her hair out of the restaurant and continued to hit her outside.

From the video, a female patron can be heard saying in Mandarin: "Don't hit her."

A lady came over and tried to help the lady being dragged but was punched by one of the men. She fell backwards and hit her head on the steps of the restaurant.

The group of men continued to punch and kick the first woman mentioned outside for about 2 minutes before they left the scene.

Reportedly sent to the hospital

A Weibo user said that the woman involved was sent to the hospital for her injuries.

He said: "It is no longer appropriate to use the word "beaten", and it should be said that it is an attempted murder..."

He also added that the fight was "unprovoked".

A photo allegedly of the woman covered in bandages was also circulating around the net.

According to SupChina, many hope this incident would serve as a "tipping point" for authorities to "reflect on systemic misogyny within society".

They also cited online discourse saying Chinese women are "exhausted by the burden of self-protection, arguing that it should be men’s responsibility to ​​stop harming women".

There was outcry among Chinese celebrities as well, with one saying "“Next time an announcement is made, I want to see posthumous photos [of those men],”.

The Lubei Public Security Network Spokesperson announced on Weibo that at around 2:40am on Jun. 10, Tangshan City Public Security Bureau Road North was notified of quarrels and violence that occurred at a barbecue restaurant.

They added that the Tangshan Lubei police have identified the suspect and arrests are being carried out in full force.

"The police will not let any criminal offence go unnoticed." 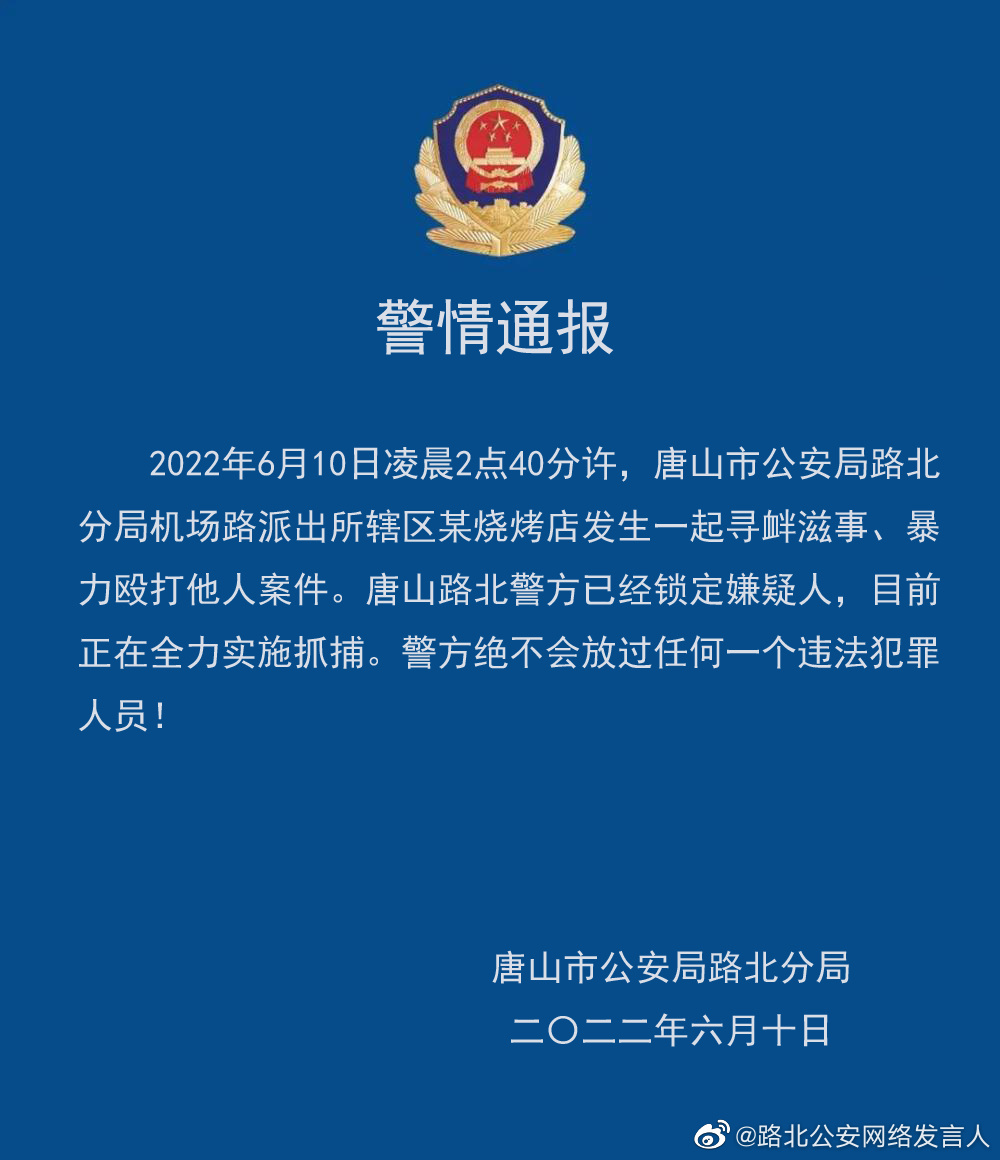 The police reported today (Jun. 11) that two out of three of the culprits have been arrested.