A woman who stayed at a hotel in Jalan Besar and was bitten by bed bugs was angered and aghast by the hotel's response after the latter pointed out that the guests themselves could have been the carrier of the insects.

Phia Boo had stayed at ST Signature, a co-living hotel at Jalan Besar, with a friend after travelling to Singapore from Kuala Lumpur, Malaysia.

The pair were covered in bed bug bites after staying there for two nights, and later posted a complaint about their experience on Facebook on Jun. 18.

Hotel staff offered to upgrade them to a larger room after Boo informed them of the bites. However, they found another bed bug on the bed of the second room.

The welts on Boo's friend also spread and worsened.

ST Signature confirmed that they had offered complimentary laundry services once Boo complained about the bed bug bites.

They also shared that they conduct weekly pest control service or maintenance, and claimed that they have a strict protocol in place for when such incidents occur.

ST Signature told Mothership in a statement on Jun. 28 that this incident was an "isolated report from [a] guest", and said that thus far, no other bed bug activity has been observed on the premises.

Upon inspecting the affected rooms, their pest control vendor only found "a couple of" adult bed bugs and no eggs.

As such, the hotel believes that the bed bugs were "very likely" brought in with Boo's luggage prior to the incident.

Speaking to Mothership on Jun. 29, Boo said that she was "very disappointed" that the hotel blamed their guests, and accused them of lying.

Boo and her friend, both of whom are Malaysian, had made the trip here to meet some former colleagues and friends. They had driven to Johor Bahru, and then took a shuttle bus into Singapore.

As the pair had just quit their jobs and were trying to be thrifty about their spending, they had chosen a "budget" hotel, she said.

Boo also shared that she apparently immediately felt itchy right after lying on the bed in the room they booked.

Although she had trouble sleeping, her friend "slept like a log", which she speculated was why her bites turned out to be more numerous and severe.

Boo also disputed ST Signature's statement that their bed bug case was an "isolated" one.

She pointed out several comments on social media and past reviews where previous guests had similar negative experiences. 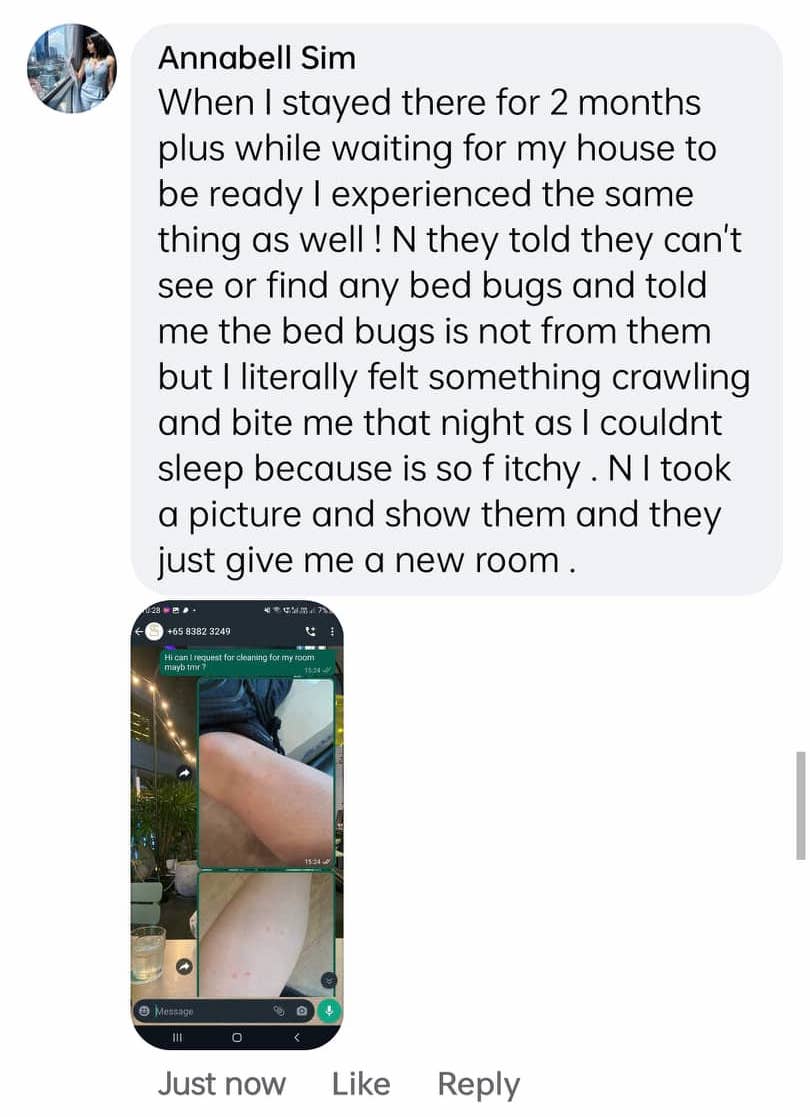 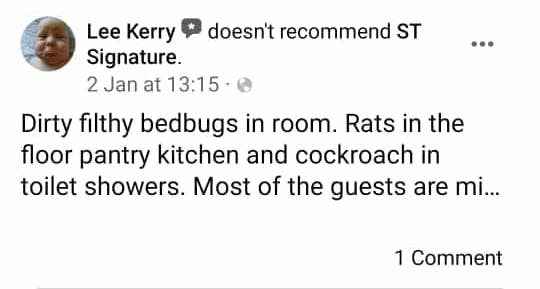 In response to Mothership's further queries, ST Signature said they had described this case as "isolated" as they did not receive any other similar reports about bed bugs "during the same period".

They also did not detect any other bed bug activity during their weekly pest control services prior to the incident.

The hotel added that "picking and choosing screenshots can be a little unfair to us".

"There may not be any basis to some of these comments, nor do we have the full context to provide further clarification or an appropriate response," the hotel said.

ST Signature continued that bed bugs "can occur due to various reasons", such as by hitchhiking on a person's clothes, bags and shoes, and can be picked up from anywhere, such as cinemas, buses or taxis.

The hotel assured that they take this matter seriously, and as such, had immediately activated their pest control service on the affected rooms once Boo complained.

They added that with the high volume of human traffic, the occurrence of bed bugs in the hotel is unavoidable, which is why the hotel has pest control protocols in place.

"As a hotel with guests checking in and out on a daily basis, we cannot avoid bed bugs, but we have strict protocols in place to ensure cleanliness and that regular pest checks are in order, as well as prompt action to minimise the effect."

The hotel also doubled down on their suggestion that the bed bugs were brought in by Boo and her friend.

Additionally, the hotel's pest control company did not find any bed bug eggs in the affected rooms.

This result "almost certainly rules out an infestation", the hotel said, and led them to conclude that the bed bug found in the second room had "very likely" been transferred by the guest.

Refunded an amount different from what they paid

Boo also shared that although the staff were friendly and helpful, the hotel did not offer monetary compensation or any refund.

The hotel initially shared in their statement that since their stay, Boo did not reach out to ST Signature directly or via AirBnB to request for any refund or monetary compensation, aside from posting on Facebook and leaving a review on AirBnB.

Although she acknowledged that she did not reach out to the hotel directly, she had hoped that their AirBnB host would make the offer after seeing the photos they sent of their bed bug bites.

ST Signature subsequently said in their first statement that they gave Boo and her friend a full refund of S$165.53.

However, Boo shared that the amount refunded was incorrect as she and her friend had paid RM622 (S$196.33) for the room, around S$31 more than that refunded.

The hotel responded in their second statement that as they did not receive any form of direct communication from Boo to request a refund or compensation, the refund was processed out of goodwill based on the amount they had received from AirBnB.

They said that the amount Boo paid included platform fees and could have been higher due to exchange rates as well.

Wish to warn others

Boo said that she was prompted to share about their experience at ST Signature after seeing how severe the bites her friend received were.

"We want to warn others, and don't wish others have to go through what we did," she said of the "nightmare" she experienced.

She also hoped that the hotel would close to carry out a more thorough cleaning of its premises.