On May 23, 2003, a long line of people began queueing to get into Sijori Resort at Sentosa.

They were there for an exciting promotion on Saturday, May 24.

In fact, some of them had been queueing since Thursday night.

Chan, the hotel's assistant manager of public relations and events, described the scene that day in a CNA article.

"Right now every few minutes there are people driving up, coming in buses just to get a good place."

Tempers even began to flare, with some queue cutters trying to game the system. This all led to a lot of pushing and shoving.

Wilson, a full-time national serviceman (NSF), and his girlfriend Mable, an administrator, were pushed around during the fracas.

They responded with a simple mantra.

"People push, we push back"

We'll get back to them in a while.

It seemed like everyone in Singapore was trying to get into this humble four-star budget hotel.

The resort (it's not there anymore, but we'll also get to that later) was converted into a hotel from two three-storey colonial buildings.

Sijori was not just a resort either. They had an absolutely stacked minigolf course as well.

The American course (9-hole), and the Betong and Eternit courses (18-hole).

They were all built on this really hilly terrain, which was quite different from other minigolf courses.

The two 18-hole courses were even of international tournament standard.

It was designed by American landscape architect Jim Warner, who created some of the iconic Pirate's Cove adventure golf parks.

The total cost for the park was estimated to be around S$15 million. To put it in perspective, Sijori Resort itself, including renovation and consultation costs, cost around S$10 million.

It was quite the project.

Here are some pictures of the course back in 2004, courtesy of Dan Sheridan for Putting Penguin, a minigolf reviewing site. 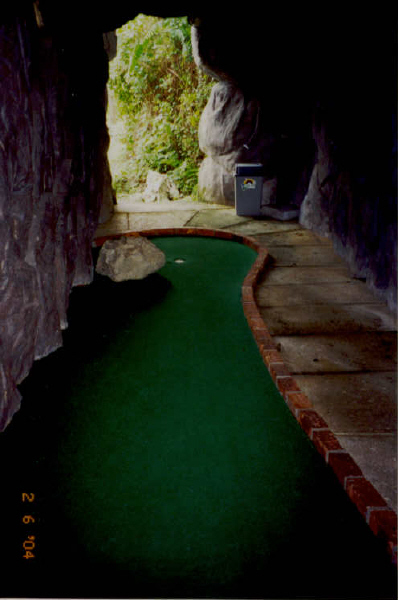 A review of the park in 2004 by Dan is still up on the site, so do read it for a more thorough idea of what the courses were like.

Here are the scores he gave for the respective courses.

But even in 2004, just about eight years after the course opened, the course was far from its prime.

Speaking to Mothership, Dan spoke about his golfing trip from 18 years ago.

Dan didn't know the exact year the course closed, but he suspected it was shortly after his trip there.

"I do not know when the course closed, but I suspect that it was not too long after I visited as it was showing signs of neglect. I was sad to see it closed as I thought it was a unique and interesting course."

According to Dan, the greens were not well swept of debris, water was not flowing in the channels, and the carpet was peeling up.

But he also expanded on what he felt were unique features of the course.

"The other unique nature of the course was that it was in a tropical environment that had some terracing and changes in elevation It was very lush with vegetation and occasional lizards going across the course."

So how did we get from a S$15 million well-received golfing park to the verge of closure?

It's hard to properly frame what kind of place the golf theme park was.

It was by no means a roaring success in the early years.

In 1999, just three years after opening, visitor numbers were already quite concerning.

The minigolf park attracted less than a third of the 1.5 million annual visitors to Sentosa.

And it wasn't like its success or failure was directly tied to the resort's fortunes.

You don't need to be a member to play on the course, just pay a S$10 walk-in rate, and you will be minigolfing with the best of them.

Sijori even offered 50 free games for those who signed up for a two-year S$680 membership (there were other perks to the membership apart from just minigolfing of course).

Silver lining though, they were not the worst performers.

The Maritime Museum attracted only 21,000 visitors for the year, or an average of 57 admissions a day.

Three years later, in 2002, the minigolf park would bring in about 50 visitors a day, performing on about the same level as a place that offered nautical fun facts.

And this was during the school holidays, no less.

But fret not, management had an idea.

In 2002, their general manager told The Straits Times of their plans to build a bowling alley at the park.

Pending permission from the authorities, the 15,000 sq ft minigolf park would incorporate a bowling alley into its offerings.

They were aiming to get the alley up and ready in one year.

"With admission fees to the island slashed to $2 from next year, we are hoping to get more young visitors. We reckon a bowling alley will be able to do that."

Overall, they were rather optimistic that 2003 would be a game-changer for the park.

In March 2003, Singapore had its very first SARS case.

Things moved quickly after that.

Thousands of people were quarantined, over a million thermometers were distributed to households, and schools were shut down.

Of course, these are less shocking measures now after our recent two-year Covid-19 nightmare.

But it was a big deal then, with some international media calling Singapore's actions "draconian".

The impact on tourism was also monumental.

Hotel occupancy especially was at around 10 per cent for some establishments. It was a tough time, and one hotel took a Hail Mary approach to get the visitors back in the resort.

In May 2003, Sijori offered free rooms for the public.

And all 61 rooms were up for grabs.

This is where we rejoin Wilson and Mabel in the midst of their shoving match.

The two had wrestled their way to securing one of the 61 rooms, though their room was far from the best Sijori had to offer.

Rose, the first in line, had queued 29 hours to get the coveted jacuzzi suite at Sijori Resort.

Why would anyone spend 29 hours for a room though, you might ask?

The next paragraph from an ST article might explain it, and take note this is a direct quote from the ST article.

"The couple had plans for an amorous night, with lacy lingerie, champagne and massages featuring prominently."

So when Chan, the hotel's assistant manager of public relations and events, suggested a party for those who got the jacuzzi suites, Rose's husband was very firm.

And that makes sense. No one is going to waste their free night's resort stay on parties or discounted minigolf trips.

You're not going to wear lacy lingerie and then go for a putt at the Eternit course.

No NSF who queued all day and pushed any and everyone in sight out of the way to get a room for him and his girlfriend is going to then spend a good few hours cautiously navigating the 15th hole at the Betong.

All in all, the resort lost S$20,000 in revenue from the rooms, as well as advertising and promotion costs.

And that's not taking into account the six security guards they hired to keep the crowd from getting too rowdy.

But still, Chan considered the entire thing to be "worth it".

Slightly over a year later, The Edge Singapore reported that the Sentosa Development Corporation had begun legal action against Sijori Resort and Sijori Wondergolf.

According to SDC, one of the main reasons for the legal action was because both companies owed SDC "substantial rental arrears".

SDC also said they had given them "25 time extensions" to make rent.

When asked about plans for the resort amidst the legal proceedings, their owner had a simple plan.

Sijori would go through an ownership change and another lawsuit over the years, and the minigolf park would sink further into obscurity.

In response to queries from Mothership, SDC said that the golf course was shut down in April 2008. About four years after Dan had reviewed the park.

According to SDC, "based on past information from Sijori Resort Sentosa Pte Ltd, Sijori Wondergolf received an average of 90,000 visitors annually prior to its closure".

But it would be unfair to frame Sijori Wondergolf as this singular failure.

Many of its faults and eventual reasons for its demise was shared by other Sentosa attractions.

Remember how in 1999, the minigolf park attracted less than a third of the 1.5 million annual visitors to Sentosa?

10 out of the 13 attractions Sentosa had at the time also attracted less than a third of the 1.5 million annual visitors to Sentosa. 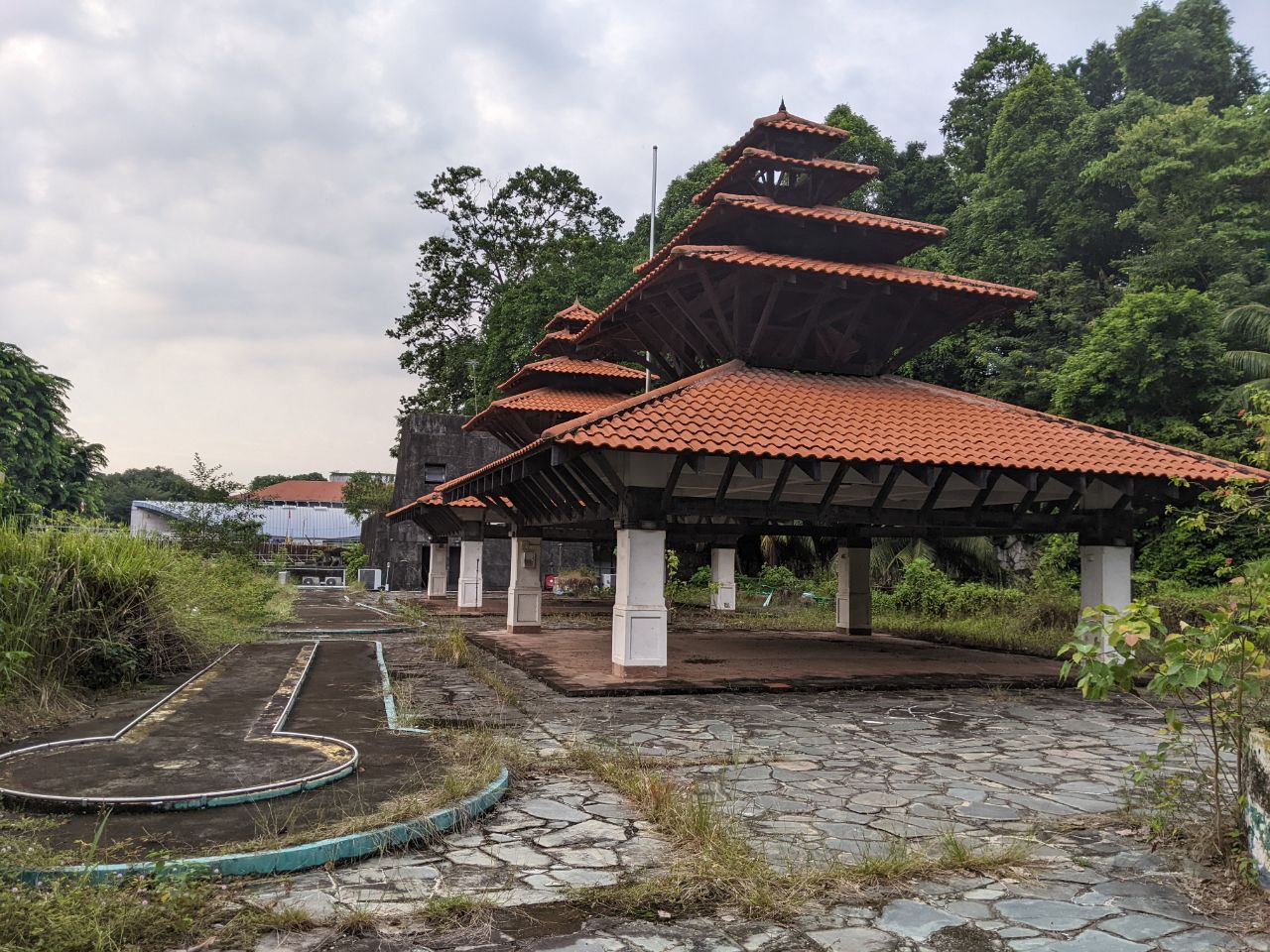 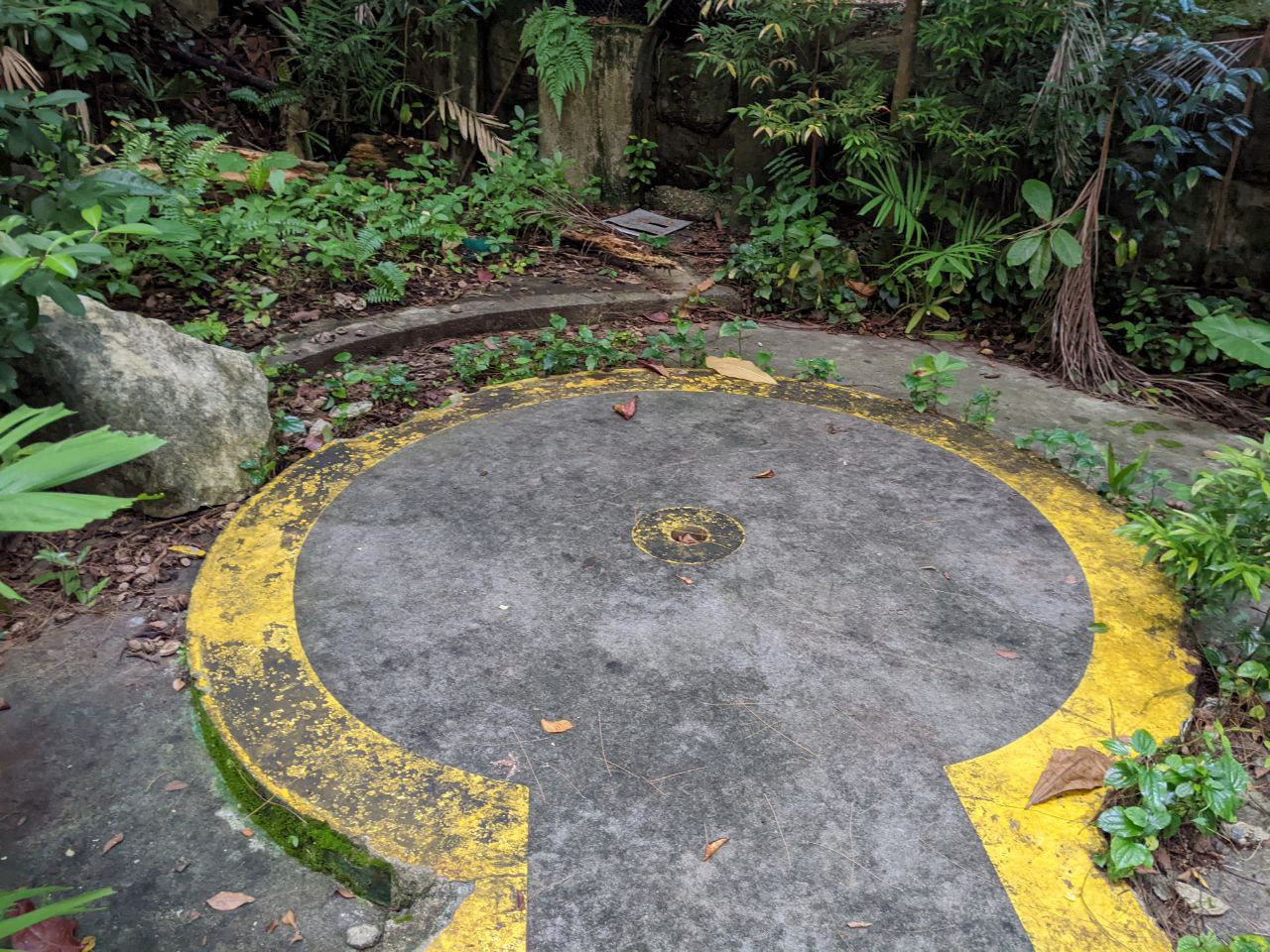 Even in its dilapidated state, you can see how large the park was. 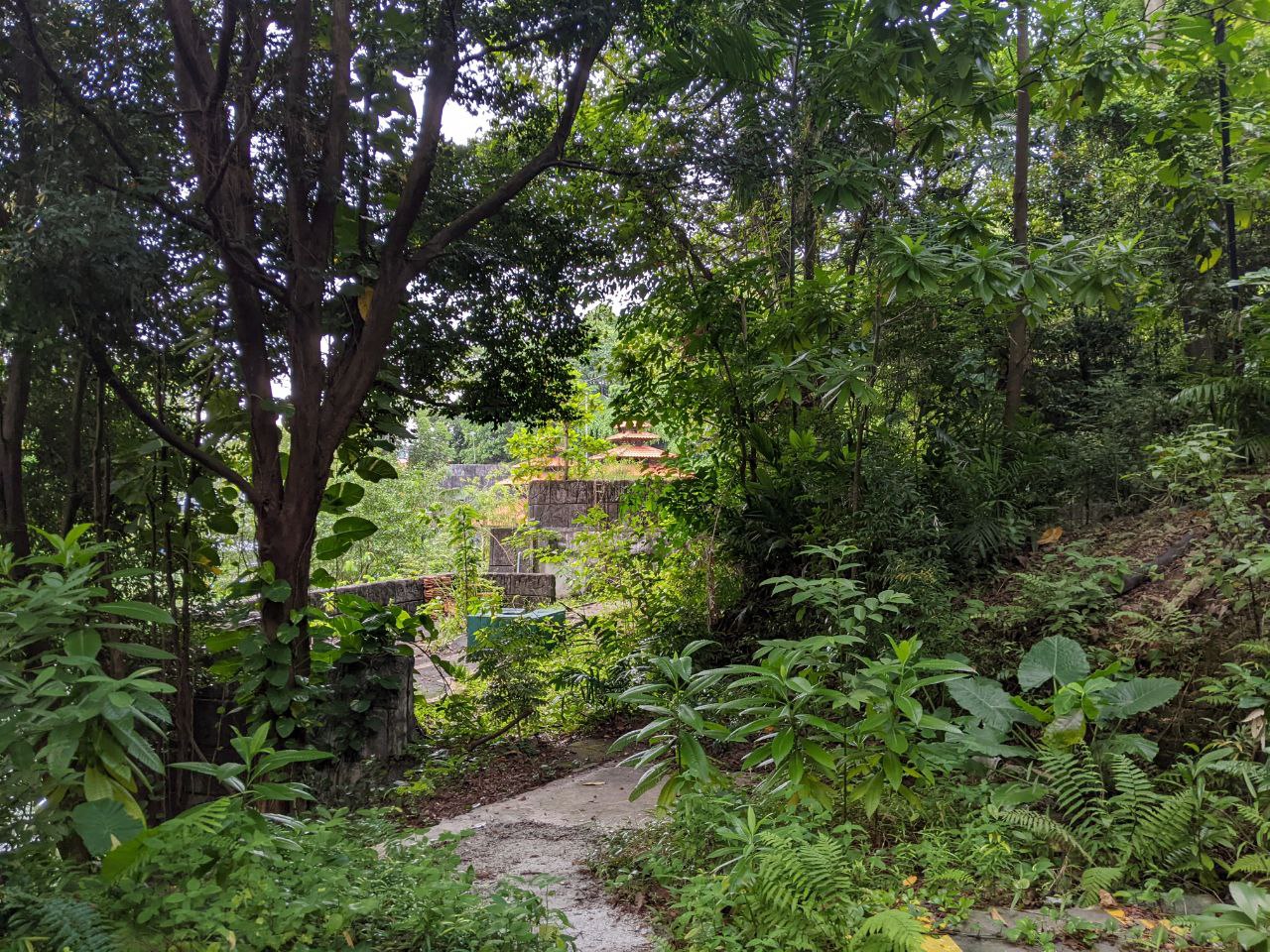 And so the S$15 million golf park with world-class courses, attractive promotions, and more than considerable thought put into the design lay in ruins. 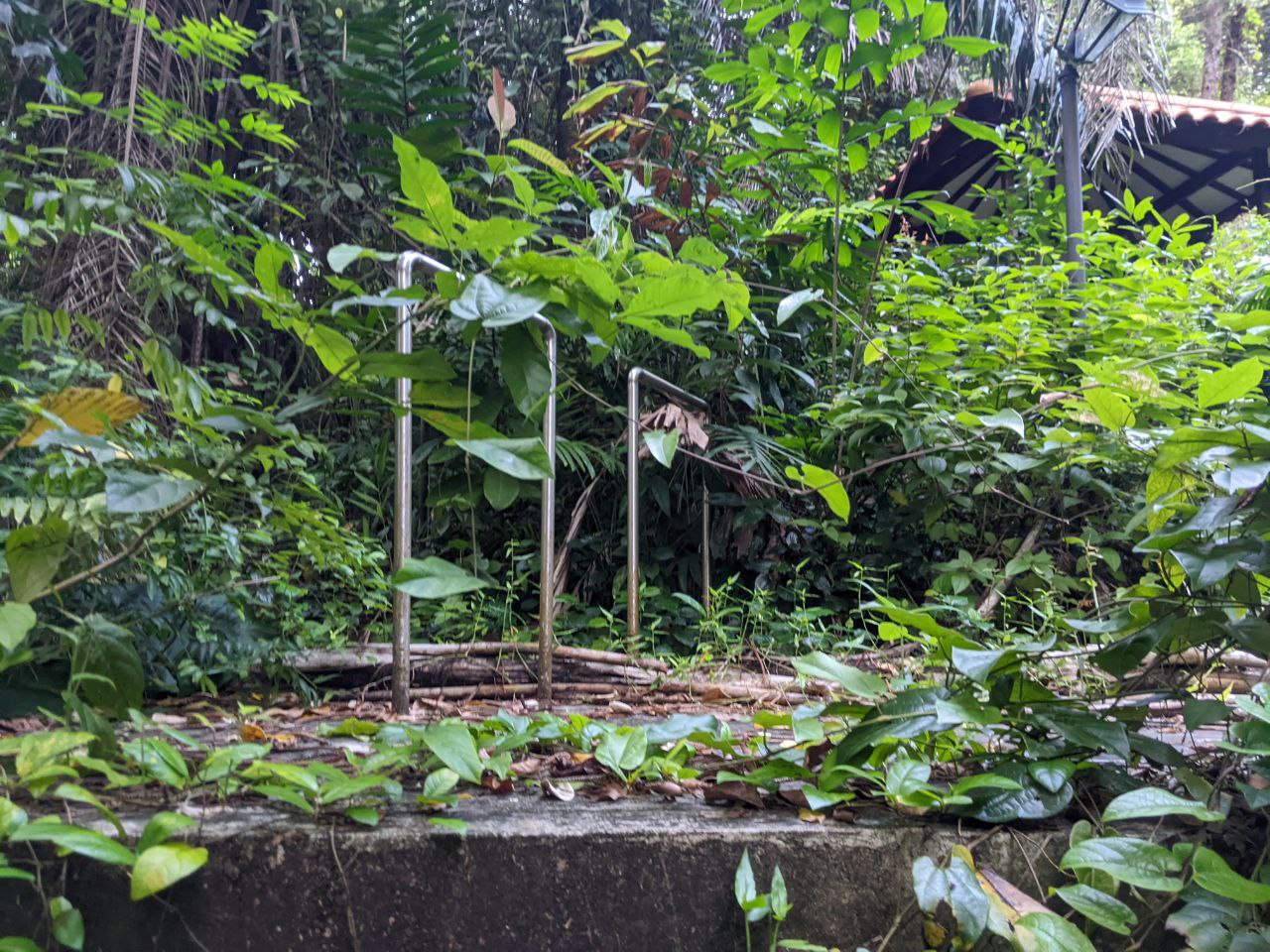 Eh, the tire from Betong. Despite all the effort and care put into the attraction, it almost felt like the park was facing an uphill task from the very start. An obstacle perhaps not even a bowling alley could overcome. The problem with smaller theme parks, in general, was touched on during a parliament session back in 2005.

Citing, among others, Fantasy Island and the Asian Village, former chairman of the People's Action Party and then-Secretary-General of the National Trade Unions Congress (NTUC) Lim Boon Heng explained why these parks invariably fail.

"Small theme parks are not viable. They are not good enough to attract the large numbers of customers needed to sustain operations. Yet to remain attractive, they have to refresh themselves.

That mindset might have in some ways informed the shift from Sentosa being a collection of smaller theme parks with wildly differing themes to having one or two mega theme parks anchoring Sentosa.

Leading to the vegetation overridden minigolf course we have today.

And at the very top of these ruins, you can even catch a glimpse of that new direction Sentosa took all those years ago. Motherlong is a new long-form series where the articles are kinda long but hopefully quite interesting. After reading, perhaps you might exclaim "Wha, this article motherlong".