A number of senior Resorts World Sentosa (RWS) casino staff members are up in arms after receiving little to no pay adjustments while their newer colleagues received S$300 to S$400 each.

Shin Min Daily News (SMDN) reported that some of them were so upset by what transpired that they took sick leave, and one has also started an online petition.

A 34-year-old senior casino dealer, identified only by her surname Feng (all names in hanyu pinyin), told SMDN that she has been an employee for more than nine years and has a basic salary of S$2,690.

She was notified at the end of March that her pay would be adjusted upwards by S$10, and was so angry that she applied for three days of sick leave.

Feng claimed that some staff members, who have been with the company for a shorter period of time, including new hires that joined one to six months ago, have received a pay raise ranged between S$300 and S$400. After the raise, some of their basic salaries were bumped up to S$2,200.

She believes that RWS did so because there has been an exodus of new hires as "another casino" has been poaching employees, and that the adjustment was their way of dissuade these staff members from job hopping.

Another senior casino dealer, identified only by her surname Lin, told SMDN that yearly pay adjustments have typically been less than S$100 over the years.

Due to the pandemic, the 38-year-old did not receive an increase in pay in the past year nor a S$300 allowance.

Like Feng, Lin was so upset that she asked for two days of sick leave.

Lin's husband, whose surname is Liang, is a supervisor at RWS' casino.

The 43-year-old has been with the company for 12 years but did not receive a pay increase during the latest exercise. He told SMDN that he feels "hurt and disappointed".

SMDN reported that the number of staff applying for sick leave has caused a disruption in casino operations.

A 40-year-old staff member identified only by her surname Xu told the Chinese daily that there has been an uptick in the number of people on leave. She reveals that RWS' casino typically runs on a five-shift system, with each shift spanning eight hours.

As there has been "at least 10 to 20 people" on leave during each shift, she observes that the casino management has been forced to call some of their other staff back to cover for their colleagues.

On Jun. 3, Xu says 15 staff members were "urgently called back" for the night shift, and just this week, 22 dealers and three supervisors were asked to work the night shift at the last minute.

A user who claims to be a senior staff member at RWS started a Change.org petition on Jun. 4, demanding for pay adjustments for all senior employees.

The petition has garnered 324 signatories at press time.

"Working in the company for more this 10 years but when comes to pay adjustment we all senior staff do not get anything at all. What you mean by we have hit the ceiling pay whereby you do not calculate the year of service your staff have been working for you.Only just an appreciation bonus for all the staff even new comers have the bonus. So senior staff don't worth a penny ? (sic)"

Those who signed the petition have called for fair treatment and hope that the CEO will hear their pleas. 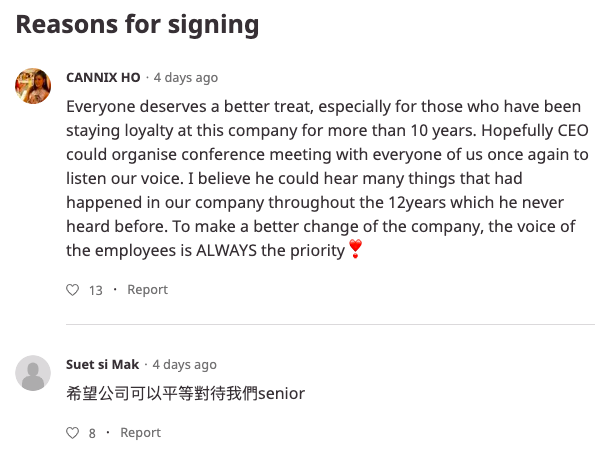 RWS spokesperson: "We believe in rewarding and recognising team members for their good work and contributions"

A RWS spokesperson told Mothership that the company is stepping up recruitment for roles across attractions operations, food and beverage services, hotels and casino operations to prepare for the post-pandemic rebound in tourism.

To attract and retain talent, they are reviewing staff salaries to "keep pace with the market demand".

RWS explained that casino staff's salary was reviewed based on several factors, including "industry competitiveness, individual’s length of service with RWS and range of skill-sets".

Aside from salary adjustments, the company has introduced a "skill-based monthly allowance" to incentivise skill development and for staff to "take greater ownership of their career development".

To thank workers for their contribution during the pandemic, RWS also recently announced that "eligible team members" would receive a "special discretionary Appreciation Bonus" this year.

The spokesperson shared, "Overall, our casino croupiers see an average uplift of 12 per cent in their monthly salary."

"RWS is committed to attracting, developing and retaining a strong talent pool that will enrich the tourism industry’s future. Our team members are our most valuable asset and we believe in rewarding and recognising team members for their good work and contributions."

Top images by Unsplash and screenshot from Change.org.