If you have ever visited the public toilets at Pek Kio Market & Food Centre in Farrer Park at least once in the past nine years, you might have come away thinking, "Eh, this public toilet not that smelly."

That's because Sivakumar Kumarasamy, 52, the caretaker of the public toilets there, has been keeping the facilities spic and span during the whole time.

His hard work was recently recognised in a video by Our Grandfather Story (OGS), which focused on shining a light on lesser known hustles in Singapore and where the host of the show tried her hand at cleaning public toilets.

As with such exposés, several illuminating revelations were made, which raised eyebrows.

For example, Sivakumar told OGS that his entire salary is fully dependent on the 20 cents he charges each patron to use the toilet.

In effect, him keeping the toilet clean and charging people for its use, is a full-time business he runs.

His monthly earnings was not disclosed in the video though.

But as a result of this arrangement, the tissues that Sivakumar sells, and the cleaning supplies he has to use on a daily basis are expenses that come out of his own pocket.

Money-wise, Sivakumar said things were "very bad" when he was charging 10 cents before.

The 100 per cent increase in entry fee to 20 cents occurred only recently, as he was charging an entry fee of 10 cents as recent as March 2021, according to The Pride.

With a 20 cent fee, the jovial man, who can speak Mandarin and Hokkien, said: "At least it can cover my salary".

Sivakumar also revealed during the candid interview segment that his previous jobs were much tougher than washing toilets.

His financial situation in the past was also worse.

Back in 2000, he said he was so poor that he could not afford public transport to go to work.

He had to walk from his home in Serangoon to work in Ang Mo Kio as he did not have enough money.

As he was having difficulty making ends meet then, he said he had contemplated suicide.

He also explained matter-of-factly that while others who are good at studying end up with good jobs, those like him who can't study end up "suffering in these kinds of jobs".

Even if he wanted to work a desk job, he said he is "not that educated".

However, as a toilet caretaker, Sivakumar said he takes pride in his work and is happy when others show their appreciation for what he does.

This is despite having to face nasty toilet users who do not want to even fork out 20 cents for the entry fee, which deprives Sivakumar of his livelihood each time that happens.

The video on Sivakumar was shared to various social media platforms, and his positive attitude and approach to life won him praise.

However, many of the top-liked comments on Instagram and Facebook highlighted that commenters online are appalled by Sivakumar's employment situation, which they characterised as exploitative.

Many online were also surprised to learn that Sivakumar does not have a base salary, and feel that he deserves better. 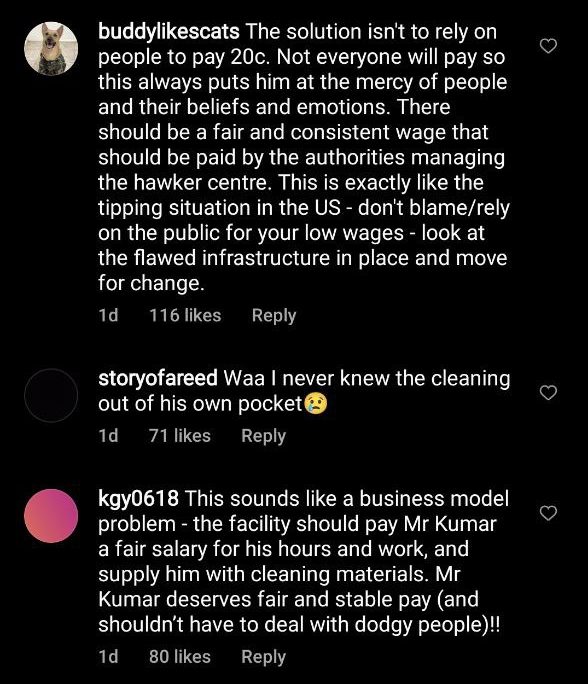 On June 15, OGS wrote in the comments section of their online posts to clarify that Sivakumar's income situation might not be representative of all toilet caretakers.

Subsequently, OGS issued another clarification stating that Sivakumar would like to assure those commenting online that he had "entered the contract willingly, knowing [its] terms".

The current spotlight on Sivakumar is not new.

Previously, his diligence and hard work had earned him praise from Alvin Tan, a Member of Parliament (MP) for Tanjong Pagar GRC.

Tan presented Sivakumar with a gift voucher in February 2021 as a token of gratitude.

Sivakumar also received a framed forum letter written by a resident about his excellent work, which is mounted on the wall next to his desk at the hawker centre.