In 1997, a 36-year-old man found himself trapped in a lift at Henderson Drive.

He had answered the call of nature and, thanks to the lift's urine detection device, found himself in a stalled cabin with no choice but to wait for authorities to free him from his puddle of shame.

It's a given that lift urination would most likely lead to a stuck lift and a not-insignificant fine.

However, this wasn't always the case.

In 1971, an absolutely harrowing tale was published in The Straits Times.

According to Peeter, the six-by-four lift was mostly covered in urine and faeces — not an uncommon scenario in the 70s.

Three-quarters of the floor was Peeter's conservative estimate.

So Peeter set off to work mashing all the buttons, but still, the lift didn't budge.

Undaunted, Peeter concentrated on the only viable button in the lift.

While the alarm did go off, no one seemed to hear it.

One reason proposed was that the alarm bell was located IN the elevator shaft. So while it was ringing real clear for Peeter, those who weren't stuck in the shaft didn't catch it.

Fearful that the monotony of the fire alarm would not make it clear that someone was stuck in the lift, Peeter started pressing the button in an SOS code (. . . _ _ _ . . .)

Peeter was still stuck in a faeces and urine-stained cabin.

Other less sophisticated methods like kicking and hitting the lift door were also doled out plentifully to no avail.

The alarm gave in before Peeter did. Two hours into his ordeal, the alarm started to peter (haha) off.

It would be five more hours before someone would come to rescue him from this urine-and-faeces encasement.

In Peeter's own words, it was seven hours of inhaling "man's inhumanity to man".

Urine in lifts was way more common back in the 70s and 80s.

A 1972 complaint by a resident in New Nation decried "the unbearing smell of urine" for the "three minutes" up and down his lift.

Media reports at the time almost instinctually paired any lift story with the smell of urine.

"The nuisance has been with us since the first low-cost, high-rise blocks went up, and clearly is a social problem that should be controlled through education if not curbed by enforcement and punishment."

Maybe it was the privacy these enclosed lifts offered compared to say at the side of the buildings or similar areas.

But how to curb this?

More urinals near playgrounds suggested the then-MP for Bedok.

The thought process was that children were the main peepetrators behind the constant tarring of the HDB lifts.

Not so fast, a New Nation article opined. It pointed to other sources of pee generators in the neighbourhood like door-to-door peddlers.

It also noted that the "provision of public conveniences does not necessarily lead to their use".

So what would solve the issue?

Believe it or not, one of the solutions proposed back in the 70s was having lift attendants at HDBs.

One HDB block even banded together to hire their own liftman.

And to be very clear, this wasn't a pilot by HDB or some community centre experiment. The residents of Block 168A in Queensway themselves hired a lift attendant, 64-year-old Lai Gek Sia.

It was a really well thought out system as well.

The residents from the fifth floor and above would pay S$2 a month to furnish Lai's $250 monthly salary.

Lai, who lived in Toa Payoh, would work from 8am to 5pm, with a day off every week.

His main job was "attending to residents" and maintaining the cleanliness of the lift.

Things seemed to work out well, with residents telling New Nation that the lifts had been in good, working condition for the months Lai had worked there.

So maybe lift attendants could be a viable solution?

Sure, HDB had actually addressed this issue a while back: All residents needed was to pay S$4 a month more per family to cover the expense.

We need to find another way, Singaporeans collectively decided.

Being from the present, you would know that urine detectors were ultimately chosen, but it wasn't always a sure thing.

The two biggest pushbacks against installing urine detectors in HDB lifts were cost concerns and the perceived efficacy of the detectors.

Both these concerns were raised during a parliamentary session in 1981.

Then-MP Lee Yock Suan's suggestion of urine detection devices "may not be practicable", said the then-Minister of National Development Teh Cheang Wan, due to the costly nature of installing and maintaining them.

He also pointed out that such devices "could create more nuisance if they are accidentally triggered off by other liquids".

HDB would take several other measures like additional public toilets and more talks and campaigns to try and mitigate the issue.

Perhaps that would work?

Spoilers, it did not.

So despite the earlier concerns, the urine detectors were installed in three lifts for a pilot project.

Here's how the early devices worked.

The urine detecting device consisted of two components: A urine sensor and a detector module.

The detector module would be linked to the computerised HDB central monitoring system. The sensor would then detect the presence of urine.

The urine that comes into contact with the detector trips it, jamming the lift. This will then activate a hidden video camera inside the lift and a video recorder in the lift motor room.

And voila, you're stuck there with your own inhumanity for a while.

Later installations would be based partly on which blocks had the most "serious urination problems", so it wouldn't be a stretch to call the first three installations urine-heavy locales.

So in Dec. 1987, three lifts in Ang Mo Kio, Tampines and Kallang were fitted with the urine detection device.

The war on piss

1988 was a cathartic year for the anti-lift urinators in Singapore.

The Straits Times dubbed the fight "the war on piss".

By Feb. 1988, five people had been caught urinating in lifts.

All five were male, ages ranging from seven to 79.

And this is where you see just how intense this war was.

Here are the two kids who were caught in the lift, with their actions being broken down like some play by play football call.

On the second page of the national paper, no less.

Those caught and fined (it varied but mostly a few hundred dollars) had their names and professions splashed in the papers.

Signs about the fine were also put up.

In fact, reporters actually went down to the blocks where these urinators lived/ got caught and interviewed their neighbours on how they felt living in the midst of public urine fiends.

14-year-old Akbar Khan thought the fine and embarrassment were enough, saying he would advise the person not to do it again.

A traffic warden echoed the sentiment in the first half of her answer.

"Doing it is wrong but he has already been fined."

However, in a terminator-esque switchup, she had a warning for the urinators in her second sentence.

"But if he does it again, I will personally throw him off the block."

Splash back to the future

If success was based on how much urine puddled in lifts, the urine detectors did their job really well.

A review of the first few urine detectors in Singapore by Parliament considered them a resounding success.

In about a year, the number of HDB lifts "affected by the urine problem" had dropped by 25 per cent.

Another 1,500 detectors were installed in lifts that very year.

That hostility towards lift urinators doesn't seem to be as intense nowadays. But anger tends to subside when you don't have to take a ride down a urine cauldron daily.

There has been a smattering of stories through the years about isolated incidents on occasion, but they are more often seen as unusual anecdotes rather than an indictment of living standards or a renewed call for lift attendants.

In the 1989 review in Parliament, the urine detector was framed as a deterrent device, supplementary material to the continued education towards a urine-free Singapore.

The deterrent might have worked too well, especially with the double whammy of cameras in lifts.

Signs considered bastions of the war on piss might now raise, at most, a quizzical look to why these relics are needed. 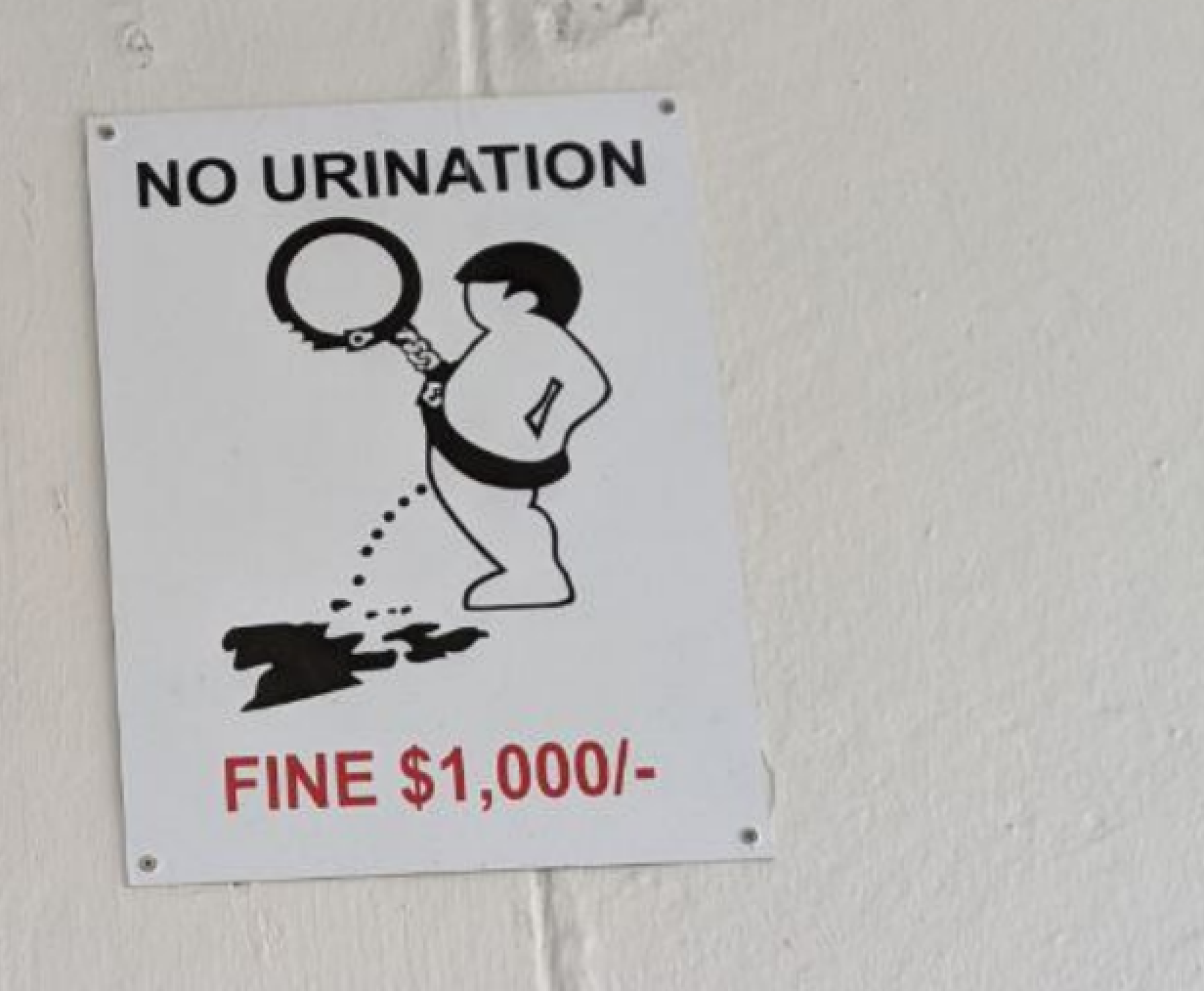 And maybe this rapid behaviour change was spurred on not by man's respect towards man but by man's fear of machine.

Somewhat paradoxically, this could mean that when inconsiderate people feel damn urgent, they might end up turning to the stairs. 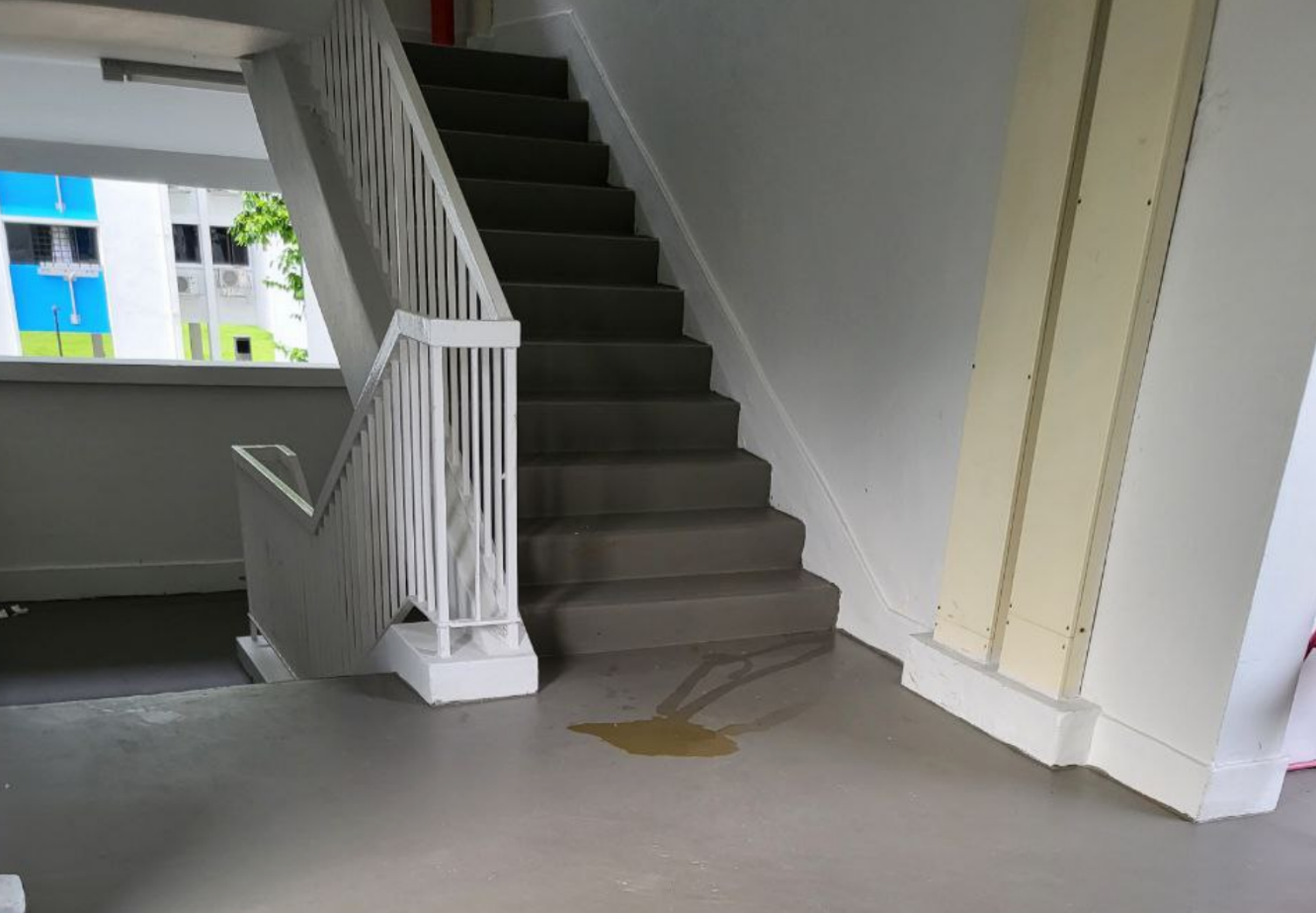 Still, not having to spend the morning going down urine chambers is an absolute win.

The devices were so wildly successful that in 1996, only 14 people were caught urinating in lifts.

The success of urine detectors extends beyond behavioural modification.

In November 1994, a man named Chong Ming cheated another man of over S$300,000. Ming had convinced the victim that he had exclusive rights to organise concerts for a famous Japanese musician.

After receiving the hefty sum of money, Ming fled.

He went on the run and off the radar.

A CNA piece from much later would describe Ming as having "disappeared without a trace".

Efforts to find him were futile, and more than two years after he had gone off the grid, seemingly no progress had been made.

Ironically, it wasn't a sting operation or undercover cops that eventually did him in.

In January 1997, the now-36-year-old Chong Ming found himself in a sticky situation.

Stuck in a lift at Henderson Drive.

In a Today article detailing the event, the headline simply read: “Urine did him in”.