Property prices in Singapore have inched upwards to continue to give sellers the upper hand.

And it appears landlords are enjoying having the upper hand too.

A photo recently shared to a private Facebook group for foreigners working and living in Singapore showed the lengths one landlord has gone to just to extract as much value as possible from a HDB flat property by renting out one room.

The photo of the latest tenancy agreement handed to the existing tenant of a Jurong West flat that is being rented out for S$750 a month contained a list of 14 dos and don'ts -- some of which more ridiculous than others. 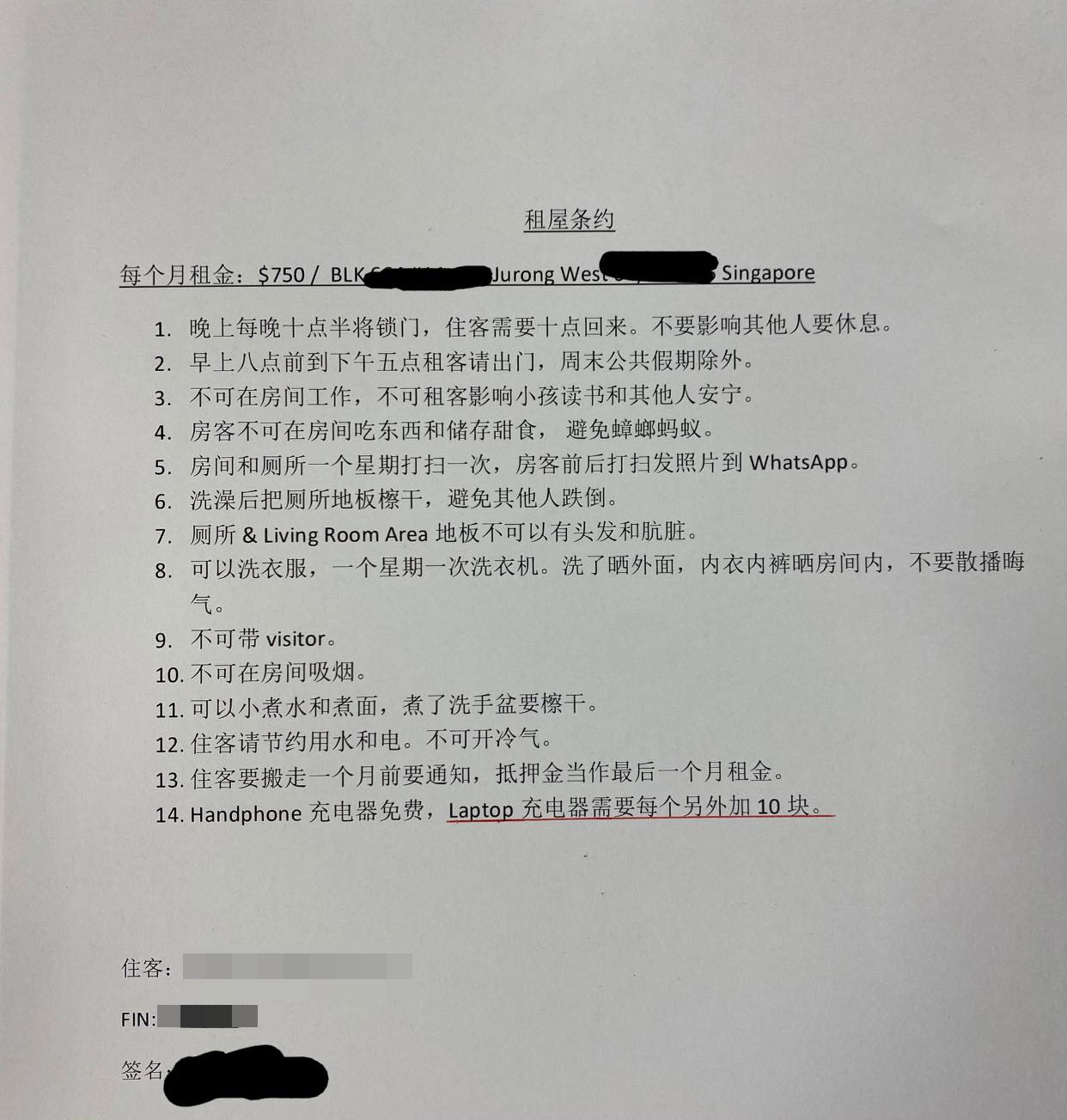 The tenant who received the new agreement was incredulous after finding out the new terms and conditions, and posted it up publicly for other foreigners working and living in Singapore to judge if such rules are even fair.

Here are the rules:

2. Tenant should not be at home from 8am to 5pm, except on weekends and public holidays.

3. No work should be done in the room. Tenant should not affect the (landlord) children's studies and the peace of others at home.

4. No food is to be consumed in the room, and no sweet food can be kept in the room to avoid attracting ants and cockroaches.

5. Clean the room and toilet once a week. Before and after photos to be sent via WhatsApp.

6. Wipe the floor dry after showering so that others do not fall down.

7. There must not be hair or dirty things in the toilet nor living room area.

8. The washing machine can only be used once a week. Clothes are to be hung outside to dry; bra and panties should be dried in your room (in order not to) spread bad luck.

10. No smoking allowed in the room.

11. Boiling water and cooking noodles is allowed, but the sink must be wiped dry after cooking.

12. The tenant should save water and electricity. The air conditioning cannot be turned on.

13. One month's notice should be given for moving out. The deposit will be used as the final month's rental payment.

14. Handphones can be charged for free. Pay S$10 extra for each laptop charger.

The context as to how these new rules came about were laid out by the tenant in the post's caption.

The person wrote in a mix of Chinese and English:

Sometimes, I watch Hong Kong dramas in my room after work at night. After living in the rented room for two months, the landlord said my laptop consumes a lot of electricity. I was then handed a new tenancy agreement whereby I have to pay S$10 extra a month to charge my laptop. I don't use a lot of electricity as I barely even boil water or use the iron.

I usually get back home at about eight or nine after work. There were two occasions when I had to work overtime and got locked outside because I arrived home after 10pm.

The landlord is a woman in her 70s. Her son and daughter-in-law passed me the new tenancy agreement and admitted they are aware that laptops don't consume that much electricity, but have to listen to his mother. Do your landlords also ask you for extra money for using a laptop charger?

The post clearly touched a raw nerve among the foreigners working and living in Singapore who responded with angry reactions.

Some of them said they would not even think twice and move out as soon as possible if handed such terms.

Others said there was no need to blank out the address of the landlord to serve as a warning to other tenants.

However, other commenters replied that showing the address could be a breach of the landlord's personal data.

Others who were utterly incredulous questioned how the tenant could stay put at such a rental for two months given how restricted and unreasonable the terms and conditions are.

In particular, the commenters pointed out that making the tenant leave the house from 8am to 5pm is unjustifiable as renting a room should allow the tenant unrestricted use of it.