A game of cards between a host and punters he invited to his house appeared to have ended abruptly as both sides accused each other of cheating.

A video of what happened when the games night ended has been circulating on social media and has attracted hundreds of thousands of views.

The nature of the hustle?

The host's cards appeared to have been marked with invisible ink, presumably giving him an unfair advantage.

The 4.5-minute video uploaded to TikTok by user Blurblur008 shows a man pleading his case with his fellow gamblers, who were understandably irate about the circumstances.

It is unclear whether the video was filmed locally, though other videos posted on the account are set in Singapore.

The voices heard in the video all bear a Singaporean accent.

"The game is unfair"

In the video, the muscle-bound host, dressed in a blue tank top, could be seen shining a ultraviolet (UV) flashlight over the cards and admitting in a somewhat astonished fashion that the cards were marked with invisible ink markings.

"But there is nobody using any contact lens," he said, a reference to the use of infrared contact lens that might allow one to see the invisible markings on the cards.

The man proceeded to pull down his eyelids for those around him to check, though he is later accused of throwing the contact lenses away.

"All of us should get back our all buy-in because the game is unfair," said one voice off-camera, which sparked a back and forth as the host continued to profess his innocence.

"You all can't accuse me because these cards, they come like that," said the host.

"But the thing is, you're hosting, you should know the cards very well, right?" countered an off-camera voice in a mix of Mandarin and English.

"For me, it's very simple," said one gambler, "if you're not willing to return us back our money for our losses, I'm just going to report to the police."

Seemingly dumbfounded by the accusation that he had cheated, the host asks in Mandarin if the whole incident was an elaborate ruse by his guests to scam him.

Who was scamming who?

While the gamblers reacted by rejecting the notion, some commenters on the video weren't so sure. 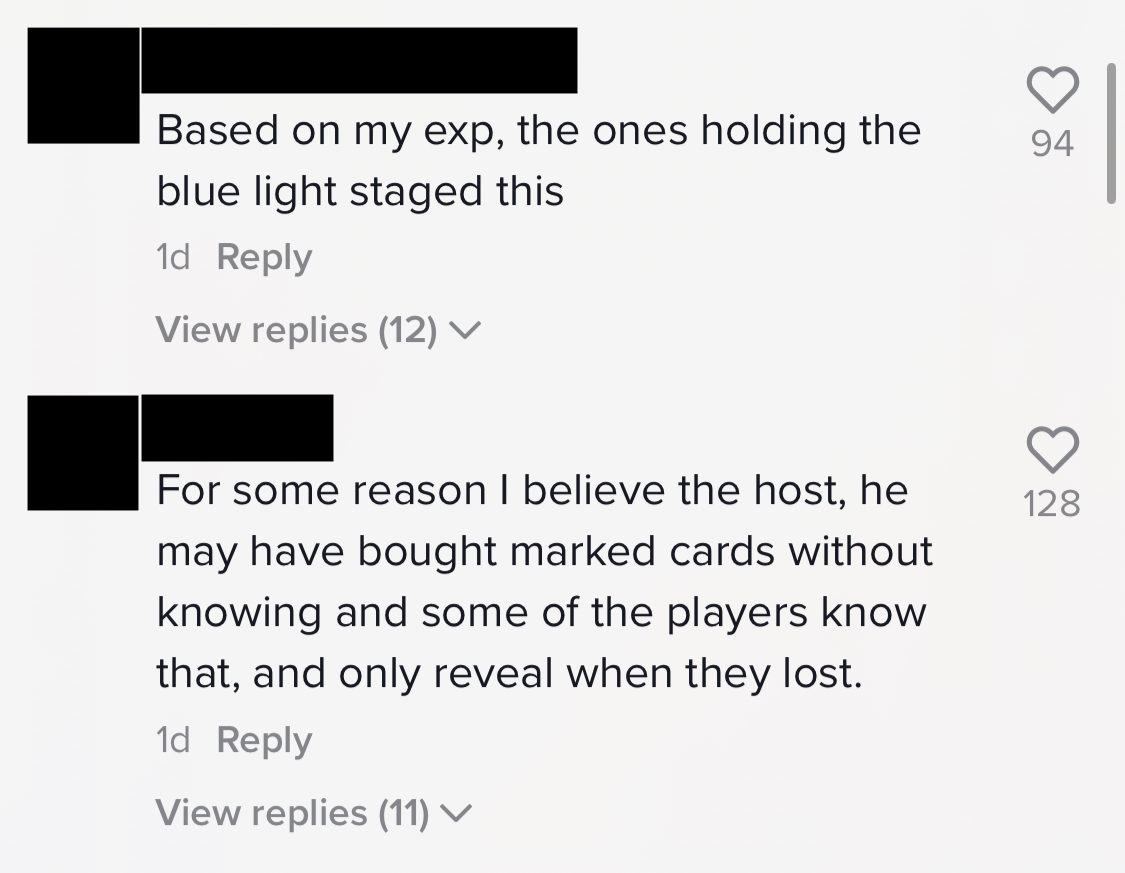 The video ended before any clear conclusion was reached.

A search online shows that invisible ink marked playing cards and infrared contact lenses that are used to see the invisible markings have been on sale online.

There are also videos that demonstrate how the markings and contact lenses work.