A Caucasian man in Singapore has taken to TikTok to thank a stranger for returning his wallet with S$460 in cash intact.

Wallet turned in to police days after it went missing

The TikToker, Chris Henderson, shared that he received a letter from the Singapore Police Force (SPF) saying that "they have items of (his)", 10 days after he lost his wallet.

So we're gonna go check to see if Singapore lives up to its name and (if the police) has my wallet which contained 500 dollars of cash in it. So let's see if Singapore has those honest people that they always go on about. Alright? I'm hopeful. I'm really, really hopeful. I need this money back. S$500 is a lot of money to lose and it's not usual to have (that much money) in my wallet. Not usual at all - maybe maximum one hundred dollars. But on this occasion I lost it. I've got a baby coming in September. I need the money, so let's see.

After going through the items that were handed in to the police, Henderson called it "unbelievable" that the S$460 he had in his wallet was returned.

He thanked whoever brought it to the SPF and hoped that the person and their family will be rewarded with good karma.

"If only I had your name and number so that I could give you some sort of compensation," he gushed.

"This is Singapore all over. The honesty of the people, all being on the same wavelength and they're not being that criminal sort of mindset of 'I'll take the money and throw the wallet'. Whoever it is - security guard, taxi driver, waiter, waitress, just someone walking in the street or something. I don't know who you are but thank you so much because I need that money back."

Calling it a lucky day, Henderson ended his video by saying that he wished that he could bring the Good Samaritan out for a beer or coffee.

In the comments section, some noticed the discrepancy between the amount of cash that Henderson had in his wallet, as at the start of the video, Henderson mentioned he had lost S$500.

He clarified that there was a possibility that he had spent S$40 before misplacing his wallet, but that he had no issue with the finder having used the sum to get a taxi or pay for dinner. 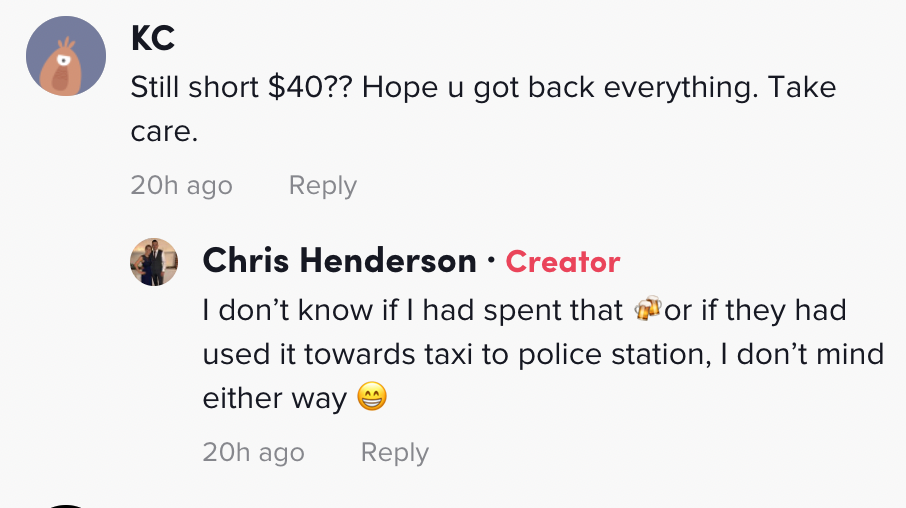 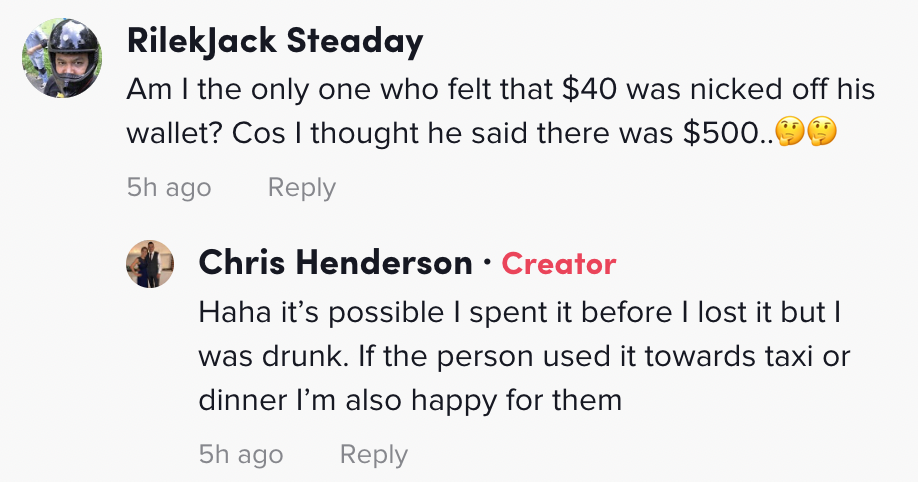 Top screenshots from @chrishendoo on TikTok.