If you're an average Singaporean (i.e. your favourite pastime is visiting malls for a spot of window shopping), you might be familiar with these contraptions: For a country that is so safety-conscious, we seem to put a lot of faith in this hulking chonk of shiny metal, sharp edges and multiple moving parts.

We get on without so much as a look, and rush up or down it when we're in a hurry.

"People often don't realise escalators are machines and when using them, they need to stick to necessary precautions," said an engineer to The New Paper back in 2018 when the Building and Construction Authority (BCA) announced additional maintenance requirements for escalators in Singapore.

Safety precautions are stated very clearly on most escalators but the thing is, we have become so used to taking these marvellous bits of machinery that our eyes pass over these warnings each time we step on.

In a nutshell, strollers and trolleys aren't allowed on the escalator. Basically, anything with wheels shouldn't go on (and that includes foldable bicycles). Why? Well, a couple of reasons actually.

First up is the obvious danger of losing your balance. As a species of evolutionarily-advanced bipeds, we are notoriously poor at keeping our balance on a moving object.

This is why escalators come with handrails — handrails which you cannot utilise if your hands are preoccupied with balancing a stroller or trolley. Leading to scenarios like these:

There is a more important reason: Strollers can damage escalators. And trust us, you don't want to be riding a damaged escalator.

When the wheels of a stroller or trolley get wedged between escalator steps, they can prevent the steps from closing fully.

And here's the scary bit: If the steps cannot close, they tend to get dislodged, causing users on the escalators to fall. Sometimes, a dislodged step will trigger the safety mechanism and cause the escalator to grind to a sudden halt, which will also cause users to fall.

Have you seen dislodged escalator steps? Seriously, it's the stuff of nightmares, like this scene from Waterway Point in September 2019: 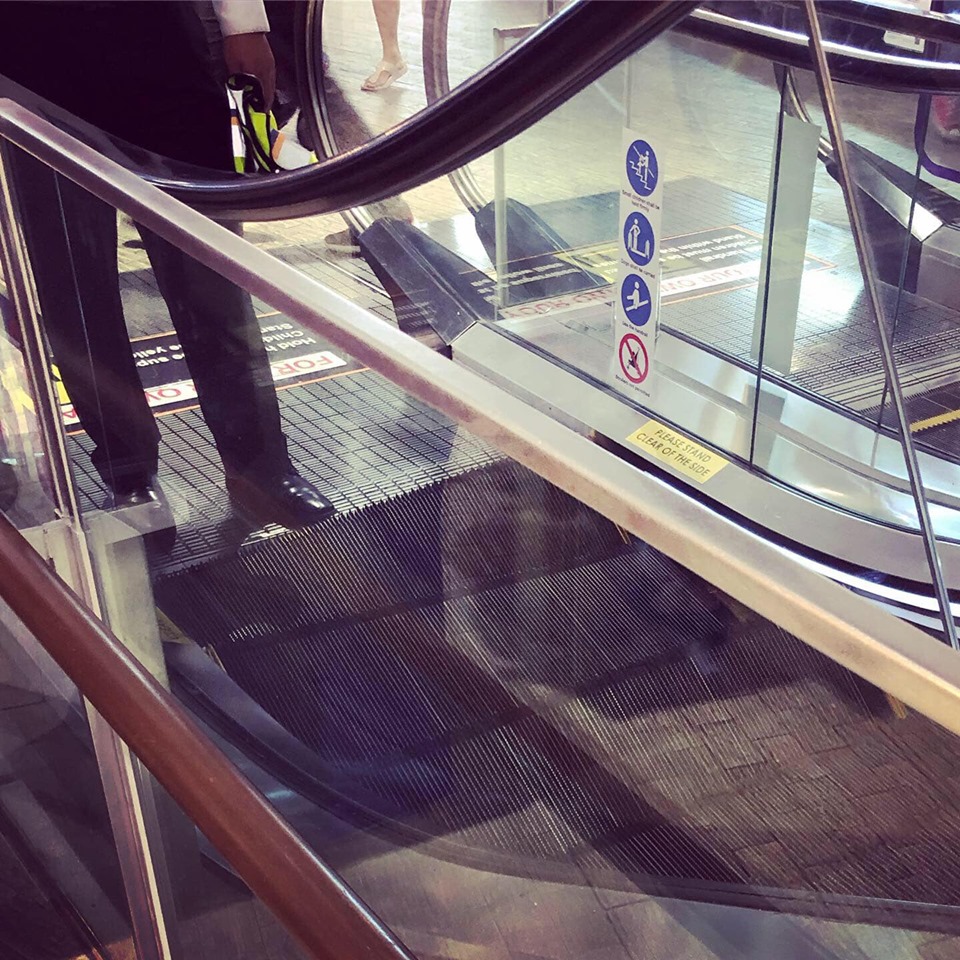 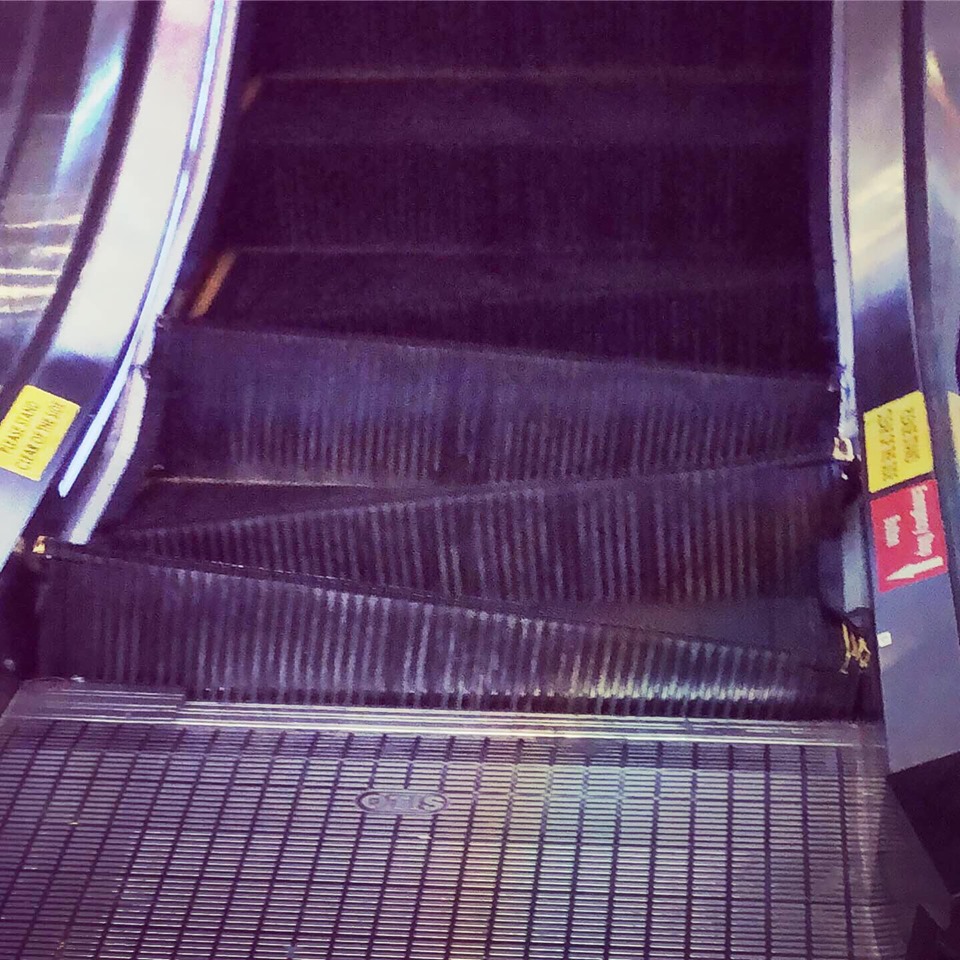 Waterway Point did not specify what exactly caused the escalator steps to be dislodged, but the day after the horrifying incident, the mall put up a Facebook post reminding shoppers to "refrain from using trolleys and prams on escalators".

"The wheels on trolleys and prams may get wedged between the escalator steps and cause the steps to be unable to retract normally into the escalator pit.

The steps may then become dislodged and this further triggers the safety mechanism to stop the escalator from operating."

Earlier in 2019, a similar scene played out at Tampines 1 when the bottom steps of an escalator were dislodged while four people were riding it.

No one was injured but many shoppers were "left reeling in shock" according to a media report.

Closed-circuit television footage subsequently revealed that -- no surprises here -- an unfolded stroller was on the escalator when the steps broke.

Similarly, a stroller was the culprit behind dislodged escalator steps at Raffles Place MRT station in January 2017, forcing the BCA to remind people to please stop bringing their strollers and trolleys onto escalators.

Not all cases of dislodged escalator steps are caused by stroller or trolley use. Sometimes, faults occur because of internal mechanical issues, an indignant parent or trolley user might say.

Well yes. But according to the BCA back in 2019, the vast majority of escalator incidents — a staggering 90 per cent — are caused by unsafe behaviour, which includes -- you guessed it -- wheeling strollers and trolleys onto escalators.

Other examples of unsafe behaviour would include not holding the handrail when you're on the escalator, not standing within the yellow box on the escalator step, and not being extremely vigilant while wearing Crocs on escalators.

Unfortunately, asking people to refrain from wheeling their strollers and trolleys onto escalators (and endangering themselves and others, for that matter) is quite unthinkable, judging from responses from social media.

A common grouse -- especially among parents -- is that the lifts are often overcrowded, forcing them to use the escalators.

"U think we like to use the escalator with stroller n risk our baby!!!??" this lady ranted against BCA after the agency advised using the lift instead.

"...the lift is always pack n if not people cutting q when the lift door is open. Example like vivo, causeway point n northpoint n some MRT station also the lift is OMG!!! Go experience urself before u all come out with this post!!!!"

"THEY LEFT WITH NO CHOICE THEY HAVE TO USE ESCALATOR! HELLO!!"

A mother who spoke to CNA in 2019 had some choice words for the bunch of folks with "no kids or strollers, and not on wheelchairs" who plagued the lifts of Seletar Mall:

"Those idiotic lunch crowds at Seletar Mall from nearby offices...Every time the lift door opens, you see these idiots inside..."

CNA said in its report then that the parents interviewed were "unanimous" in citing overcrowded lifts as justification for their unsafe behaviour.

Several parents even admitted that they had on occasion wheeled their strollers onto escalators despite knowing the risks involved.

True, many people wheel their strollers and trolleys onto escalators without incident, but let's look at it this way: You're taking a gamble with your safety as well as the safety of other escalator users.

Here's more food for thought: It's one thing to gamble with your own safety. But are you willing to jeopardise the safety of others on the escalator...because you have to wait for a longer period of time to get into a lift?

If you really have to bring a stroller/trolley onto the escalator, here's how to do it

Of course, there is a way to take the escalator if you have a stroller or trolley and you don't want to (or can't) take the lift: You have to fold your stroller or trolley before you bring it on, and — this is important — you need to keep it within the yellow box on the step, keeping care not to wedge the wheels into the corner of the steps. Or even better, lift it up so it doesn't come in contact with the step.

This move isn't advisable if you're alone with a baby in a stroller. It isn't safe to do the above with one hand while holding the baby in another.

So, unless you are absolutely sure you can do the above with one hand while holding the baby in the other (and have practised this safely, off an escalator), take the BCA's advice for elderly folks and people with young children and/or strollers: Wait for the lifts.

But more than this, it's also important for people who are free of strollers, trolleys, and wheelchairs to be mindful that such folks need to use the lifts because it's the safer option for them and everyone else.

One mum suggested implementing lift priority queues for this group of people, but honestly, for a society that was brought up on graciousness and kindness campaigns, do we really need more intervention to remind us to be kind and look out for those in need?

Do we also need reminders not to put other people's safety at risk by pushing strollers and trolleys onto escalators?

As William Wan, the General Secretary of the Singapore Kindness Movement, said in 2019, a lot of being considerate and other-centred is "just common sense".

Some food for thought next time you're on an escalator.