A cafe at Orchard Central has come under fire for its harsh responses to customers who leave negative reviews on Google.

On Thursday (Apr. 28), the cafe — Grain Alley — finally responded to criticism by sharing their support for their staff and explaining the rationale behind their fiery rebuttals.

But before we get into Grain Alley's response, let's look at the criticism.

On Apr. 23, a Mothership reader reached out to us with complaints about Grain Alley.

He said that he had been making plans for brunch when he came across the cafe. At the time, he said, the cafe had a 4.7-star rating on Google.

He added that it appeared that the owner was "incentivising" five-star reviews by offering free gifts on the next visit, if the customer showed proof of writing a five-star review.

However, the reader shared that what really caught his eye was the way negative reviews were responded to, saying that the responses contain insults, name-calling, and in at least one case, even the supposed revelation of personal information.

To say the least, the reader said that he did not end up having brunch at Grain Alley.

Intrigued, we looked into his claims about the cafe and here's what we found:

Grain Alley has indeed received quite a number of five-star reviews.

In response to a number of five-star reviews, Grain Alley offered customers a cup of their "brand new specialty arabica coffee with our compliments".

According to Google's policies, content that has been incentivised by a business in exchange for discounts, free goods, and/or services is prohibited.

Personal attacks in response to some negative reviews

Based on the negative feedback, it seemed that one of the main complaints people had about the cafe was their no-laptop, no-tablet policy.

One customer complained that she was told that she would not be allowed to use laptops or tablets, despite the cafe being less than half full, calling it a "major turnoff".

She called on the cafe to include signage indicating the rules, and said that even if there were signs, they were "not visible enough".

In response, the cafe stated that they are a "work-free space" and that the policy is "stated on every table and at both entrances".

However, they didn't stop there.

Grain Alley then asked a rhetorical question about why people (likely implying the customer in question) write reviews that "reflect their objectionable nature and reveal their questionable character".

"Isn't it odd to publicly put a sign on your self (sic) showing everyone your unkind heart and unpleasant personality? Or does everyone know already?"

Another customer left a negative review criticising the cafe for not providing wifi nor allowing her to use her laptop there despite purportedly listing wifi as an amenity on Google Maps.

The cafe appeared to have then identified the customer's employer and sent them her original post. 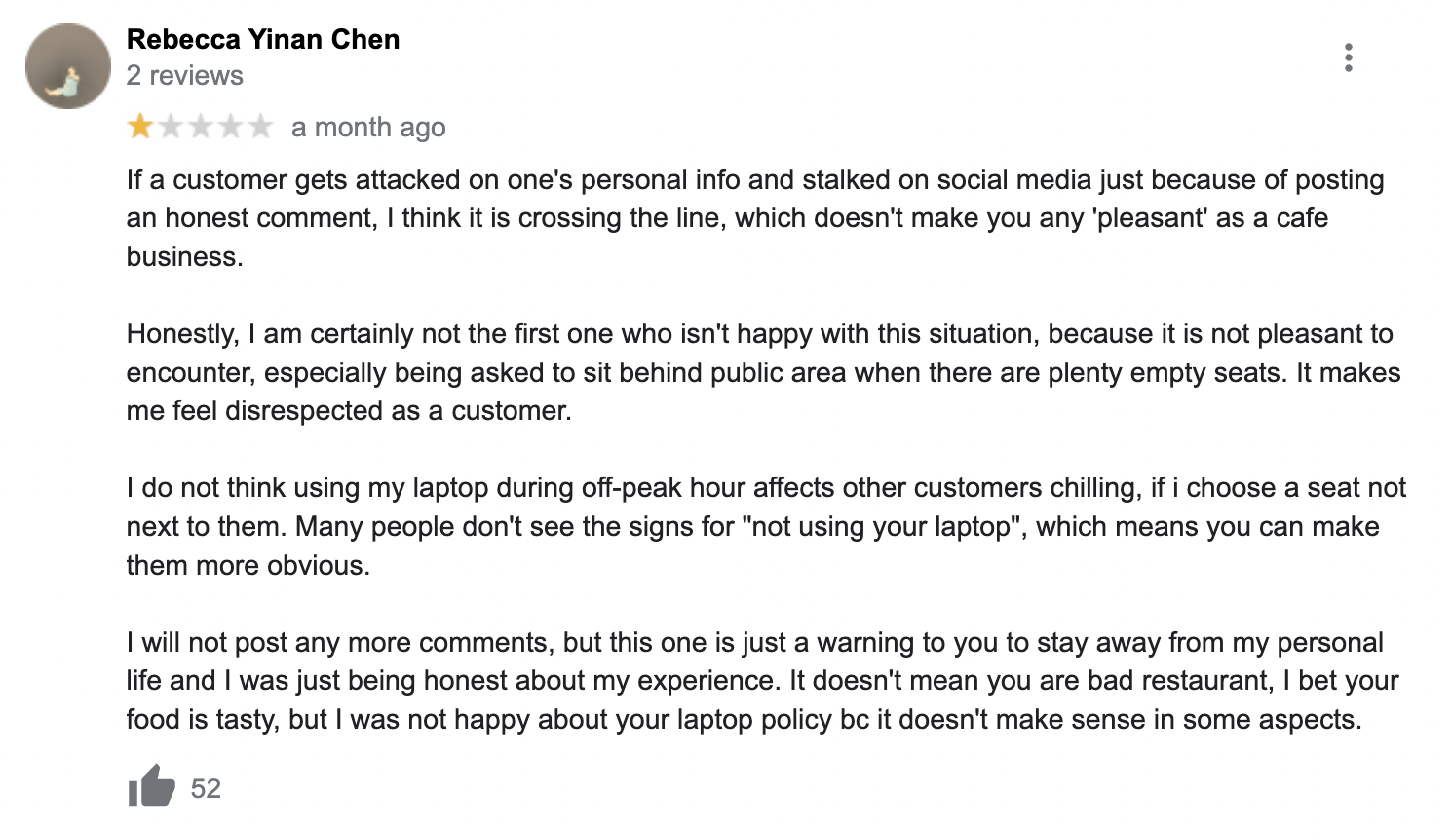 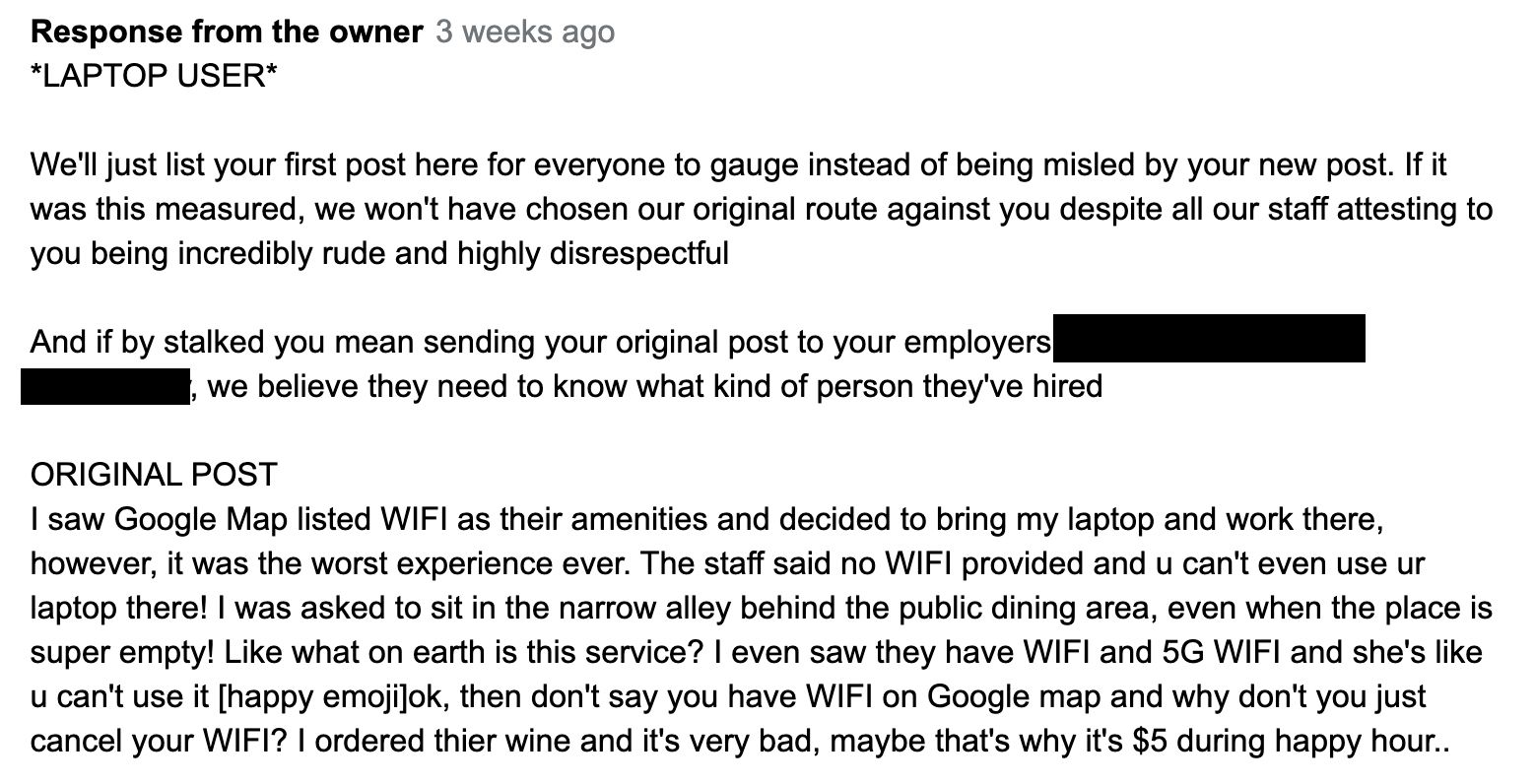 One person, identified as a "local guide" on Google, left a review saying that the cafe had previously been a good place to have drinks and get some work done, but that it had changed.

They also called out the rude replies to negative reviews.

In response, Grain Alley replied calling the person an "insolent kid" and telling them to "take a shower, you smell".

Other harsh replies to poor reviews

When a customer left a review criticising the cafe's service and food, Grain Alley responded somewhat passive-aggressively, saying that "the not so well-read nor well-travelled don't quite take to our food".

The cafe owner also used over 250 words expressing how well they themselves treat other service staff, to the point that they are "welcomed everywhere" — including being "ushered into full-house clubs" and "waved to the front of the line at hawkers'". 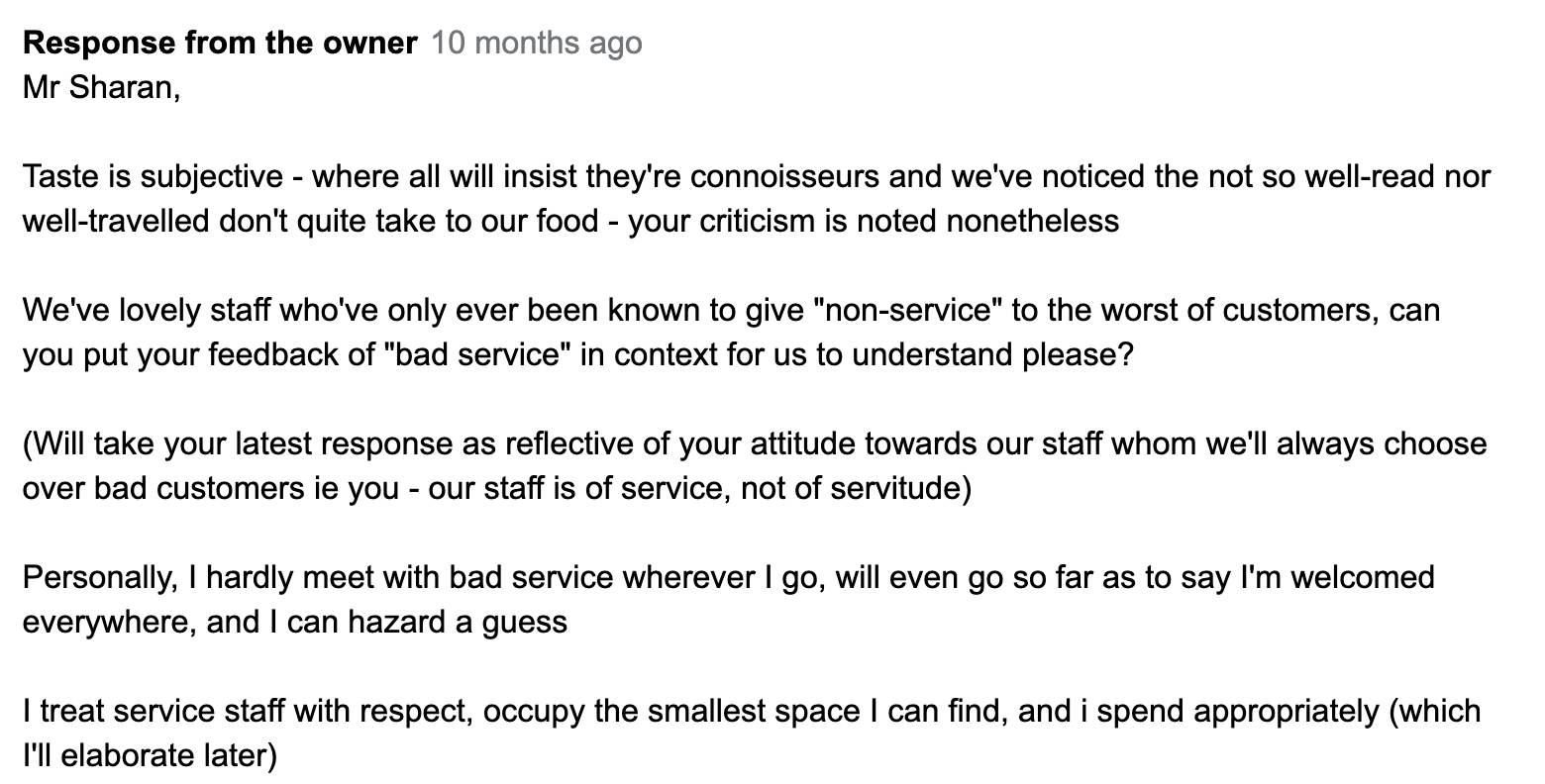 Even what seemed like quite an objective review — which included pros and cons, and even a legend to explain how the star rating was decided upon — was met with some vitriol. 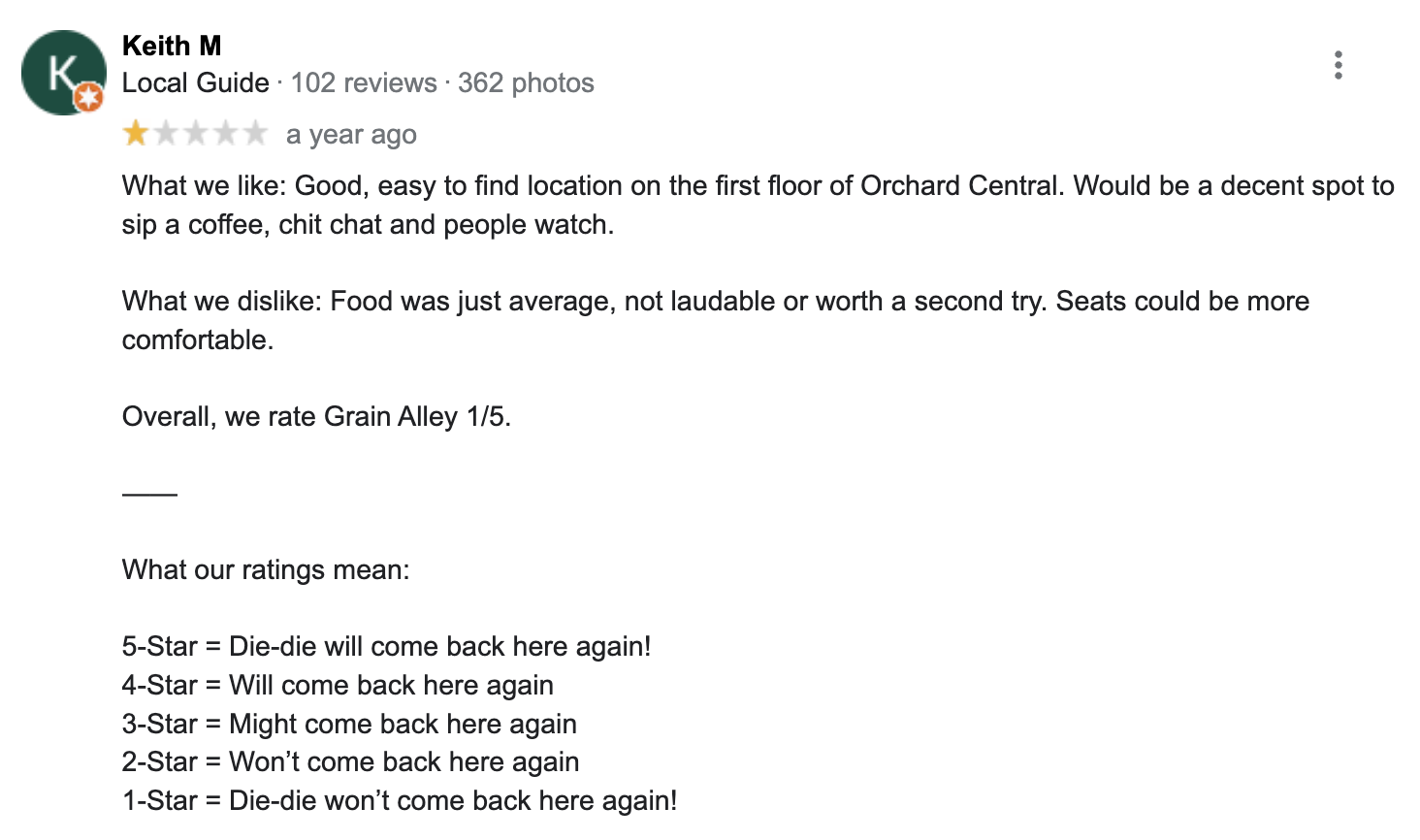 "These bad apples should be removed from the basket and put in their rightful place or they'll continue tainting the reputations of other outlets and sullying the good intentions of other honest reviewers."

And another customer who complained that the food at the cafe was overpriced was asked why he even ordered if affordability was a concern. Grain Alley has recently been flooded by 1-star Google reviews, causing their Google rating to tank to 3.7-stars.

However, Grain Alley appears to still be operating as usual.

In fact, on Monday (Apr. 25), Grain Alley posted two Instagram Stories celebrating their business success, saying that it had been their "best Sunday sales".

On Apr. 25, Mothership reached out to Grain Alley to seek their comments on the situation.

We asked them about their process for responding to negative reviews online, accusations of "doxxing" the customer by contacting her employer, and any issues with offering complimentary coffee to customers who leave five-star reviews, given Google's policy.

As of Thursday (Apr. 28), Grain Alley has not responded to our queries.

However, on Thursday afternoon, the cafe posted a series of three Instagram posts addressing the backlash against them.

In the first post, they emphasised their dedication to their staff over the idea that "customer is always right", saying:

"The main reason we not only survived the pandemic and thrived despite it with its related difficulties is because of them."

According to the Instagram post, none of the staff took medical leave throughout the past 28 months of being in business, other than for Covid-19, and only two staff have taken long leave of more than one week.

During busy times, the staff all volunteers to stay behind to help, even staying until almost midnight sometimes despite their shifts ending in the afternoon.

"They’ve shown extreme loyalty to us and everyone is still with us today. With the high-attrition rate of our industry, it shows how safe our people feel working here, knowing we’ll protect them."

Thus, if someone asked them, "So you’ll choose your staff over me?", the cafe said that their answer would simply be: "Yes."

"Distinction between enticement/bribe and appreciation"

Addressing the issue of offering "gifts" to customers for positive reviews, Grain Alley stated that they offer their thanks to customers after seeing their reviews.

"This before-and-after practice may appear inconsequential but is the distinction between enticement/bribe and appreciation (when a Telco offers free installation, that’s to entice you to signup, if they send you a free gift after signup, that’s to show their appreciation to you)."

Grain Alley also shared some context on events that allegedly unfolded on Apr. 23.

According to the cafe, a group of five people who were at the establishment celebrating a birthday ordered three non-alcoholic drinks and three slices of cake.

A staff member then purportedly sent over a complimentary cocktail as well as as a round of tequila shots, in order to make the birthday person's day.

These free drinks allegedly cost more than the total amount the group spent.

By some twist of fate, the five people in the party came across Grain Alley's Google review responses and "decided to take offence at our Google replies", each leaving the cafe a bad review.

Grain Alley then claimed that the "perpetrator" then "hid behind a computer screen and went on a few forums to invite fake reviews for us".

Rationale behind responses to negative reviews

In the final Instagram post, someone by the name of "Joe" stated that he is the one who responds to reviews.

He said that staff are told to raise any issues they face with "unpleasant or unruly customers" so that Joe can then respond to any subsequent reviews.

"While my replies can be robust, I took into consideration what customers wrote online and how they treated our people in person."

He claimed that customers' reviews are usually either more tempered or sometimes later edited to avoid mentioning their "bad behaviour" from earlier.

He also alleged that his staff supposedly suffered physical and oral abuse from customers.

"Bullying starts from an imbalance of power, the same way a teacher or an employer holds power over a student or an agent. Some customers feel that misplaced sense of power over service staff and this has led to frequent abuse - ranging from oral to the physical (one threw her takeaway box at our staff as we were busy and she felt she waited too long)."

"When a customer posts a review, it’s done in the spirit of freedom of speech. In that same spirit, one should expect and accept a reply from the business it’s directed at," Joe said.

He finally caveated by saying that if the cafe is wrong or if customers are justified, they "must make amends and we do".

Hence, he claimed, staff have the freedom to offer customers free food and drinks for wrong orders or long waiting times without getting permission from management.