On Feb. 18, a community cat was found dead and buried in a grass patch near an HDB flat in Pasir Ris.

The 10-year-old cat was named Ginger but was also fondly known as Murtabak.

Here's a detailed timeline of events leading to Ginger's demise, as told to Mothership:

Around 8pm: Ginger had his dinner at his caretaker family's house located on the first floor of an HDB flat in Pasir Ris.

This was the last time they saw Ginger.

Around 11:30am: The caretaker family received a call from their helper who told them that the block cleaner said that he saw Ginger on the grass patch behind their block. He was bleeding, but still breathing.

However, when the cleaner came back 10 minutes later, Ginger was no longer there.

It is unclear around what time the cleaner last saw Ginger.

Around 2:10pm: The caretaker's family and their neighbour tried looking for Ginger, but to no avail.

They bumped into the cleaner who showed them the grass patch where Ginger was last seen.

At the same area, they found what looked like a tuft of Ginger's fur and his collar.

Inscribed on his collar is his name as well as the number of Julie Wang, one of Ginger's caretakers.

However, she didn't receive any calls regarding Ginger.

Coincidentally, another neighbour (for clarity, we shall call this house Unit 1) said that they witnessed Ginger being put in a paper bag and buried Ginger at the grass patch right behind Unit 1.

Unit 1 is less than a metre away from where the cleaner last saw him.

The group of neighbours went to the site and began digging the burial site where they eventually found Ginger's body.

Wang noted that his neck, eyes, ears, nose and mouth were covered in blood.

While it may look like Ginger suffered some slashes on its neck, Wang told Mothership that NParks did some checks on the spot and did not see any surface wounds.

They also noticed a trail of blood at the void deck, right in front of Ginger's burial site.

After removing the dirt off the body, Wang said that they called NParks to report on Ginger's death.

She said that NParks has taken Ginger's body for an autopsy.

Another family member from Unit 1 reached out to Wang to share that her brother spotted Ginger lying motionlessly on the same grass patch at around 7:30am on Feb. 18.

However, he assumed that Ginger was sleeping.

At around 10am, a couple from the opposite block went to Unit 1 and asked to borrow a shovel as they saw Ginger's dead body at the grass patch and wanted to bury him.

Wang described Ginger as a "very docile and friendly" feline.

Ginger first came into her family's life in 2012.

"He first came to my brother as a stray and sat beside him, seemingly to comfort him during my grandmother's wake," she shared.

Speaking to Mothership, she said: "He often interacted with humans and was easily bribed with treats and pats. He was also always ready for the camera as we have many people taking pictures of him every day."

The community cat was also a common topic among the neighbours and one of the reasons why it became a close-knit community.

"We often bonded over his antics and also looked out for him. Some asked us why we don't keep him indoors. He was a very social cat, didn't want to stay indoors for long periods and got upset when he couldn't get out."

Petitioned to not remove Ginger

Ginger was the same cat that was embroiled in an online petition after a resident allegedly complained that Ginger had scratched their car.

The online petition was created against Ginger's removal.

In an update from Pasir-Ris Punggol Town Council, the town council stated that they are "not aware of any decision to remove the cat".

In Oct. 2020, Ginger was also reported to have gone missing.

Wang shared that while it was normal for him to disappear for a few hours, he couldn't be found in the vicinity after 24 hours.

After an area search with the neighbours and a public appeal, Ginger was found 10 days later at an HDB estate that was at least 20 minutes' walk away from his usual spot.

Since then, the Instagram page has received an outpouring of messages from the residents of the Pasir Ris estate sharing their pleasant memories with Ginger.

"There were many who turned up at our house and his last resting place to offer their condolences, treats, flowers and drawings," Wang said. 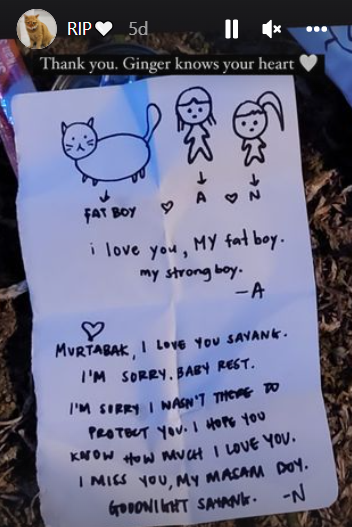 After Ginger's autopsy, Wang told Mothership that they hope to arrange for a cremation to send him off.