American newspaper of record The New York Times has caused outrage in Singapore.

Not with its critical news reporting, but by publishing under its venerable journalistic brand what appears to be an uncritical acceptance of an unvetted recipe that showed chicken parts disrespected as they were cooked all wrong, and then somehow passing the dish off as "Singaporean Chicken Curry".

The recipe appeared under the NYT Cooking segment (behind a paywall), a subscription service of the newspaper that has been touted as a companion digital cookbook and cooking guide.

Here is the quick-cut Instagram video that really just shows a very poor facsimile of Singaporean curry chicken and can actually be turned into a tutorial on how curry chicken is not prepared here.

Trigger warning: Viewer discretion is advised. You will get angry watching this video.

Who is in the video?

The video features Clarissa Wei, a freelance writer from Taipei.

She is seen demonstrating how to cook her version of "Singapore chicken curry" -- or some strange, inaccurate version of it.

Her recipe was derived from another woman, Shila Das, who works as a sales professional, according to Coconuts.

But the final product that Wei conjured looked nothing like the dish in the photo published. 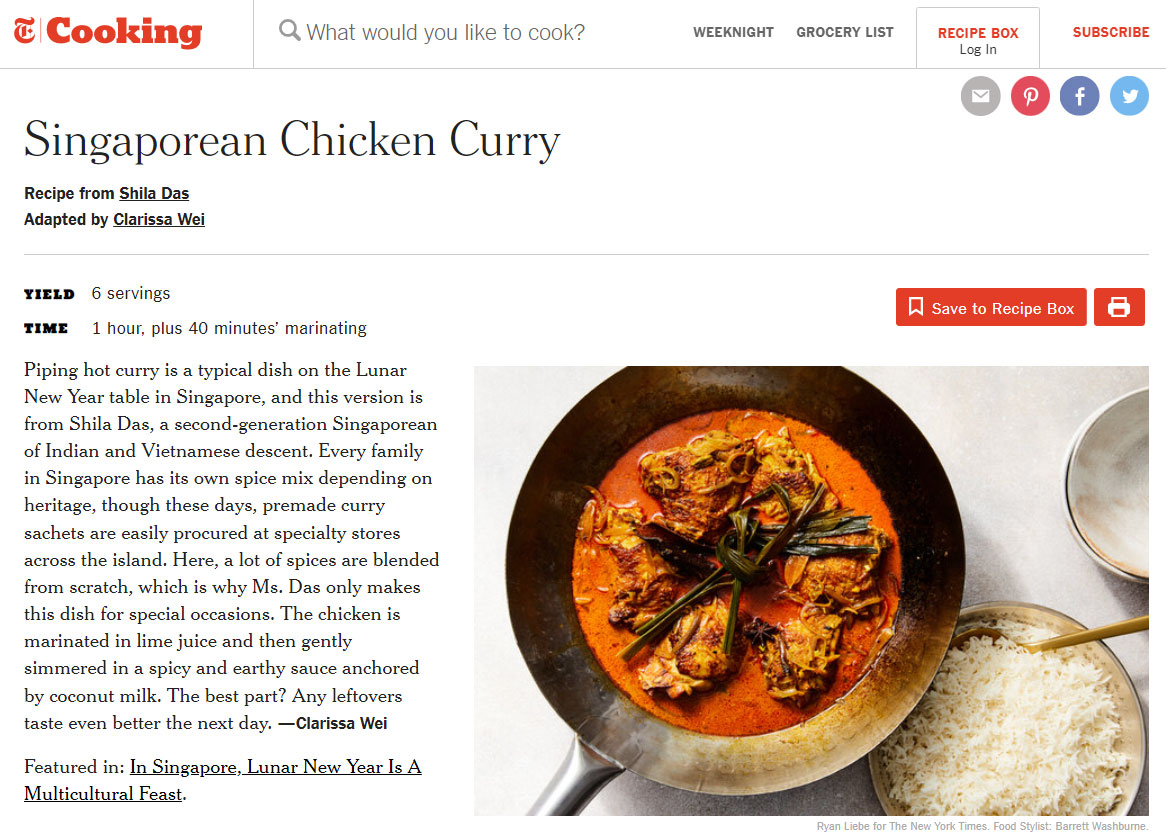 A simple side-by-side comparison of the website photo and the dish in the Instagram video would have set alarm bells ringing in the NYT office.

According to Coconuts, Das has since clarified that she had provided her father's recipe for curry chicken to Wei, but she is not sure what happened after that.

Currently, it is unclear how much creative licence was accorded to Wei for her to make Das' recipe her own, or if Wei's interpretation is legitimately how she has been cooking her curry chicken, or if she was just ad-libbing for the camera in this one instance.

Responses on the Instagram video have been about expressing one's befuddlement at what was going on, to not comprehending anything anymore.

Some of these comments include:

This is culturally illegal

As a Singaporean... I'm disappointed. We need to call upon Uncle Roger for this.

And one person took to TikTok to diss the dish, by calling it "longkang" (drain) water chicken, which will be regarded as a travesty by Indian mothers: "I'm Indian, if I show this to my mother, immediately heart attack."

Clearly, there is no such generic thing as "Singaporean Chicken Curry".

Chicken curry comes in many forms, all done differently by the Peranakans, Chinese, Indians, Malays, and Eurasians.

But essentially, curries found in Singapore have copious amounts of chillies and curry powder, a blend that includes turmeric and ginger, which are used to cook chicken and potatoes into a fiery red and orange dish.