NTUC FairPrice will lodge police reports and take stern action against errant users who remove the supermarket's trolleys and not return them.

This warning was issued by FairPrice Group CEO Seah Kian Peng in a Straits Times forum letter on Jan. 18, 2022.

It was in response to feedback from members of the public on how supermarkets should tackle the perennial problem of users who effectively misappropriate the trolleys for their own personal use by pushing them home with groceries inside, and subsequently, conveniently discarding them at void decks or by the road after use.

The issue of abandoned trolleys came into focus once again after an elderly FairPrice staff was spotted making the rounds in Simei to retrieve stray trolleys discarded in the estate.

He is believed to have been carrying out this routine in Simei for many years now as part of his job.

Many ideas on preventing abandoned trolleys, but they don't work

The FairPrice CEO's response was also to explain that many ideas have been implemented to incentivise the return of trolleys or prevent trolley abuse over the years, but all have failed and do not address the issue.

The issue of trolley abandonment, according to Seah, is caused by a minority of users, with the majority of customers doing their part by obeying the rules and being considerate to others.

Seah wrote: "To us, these are all second-order things which do not address the key issue which is fundamentally, irresponsible social behaviour."

Some of the measures that have been tested, and their reasons for discontinuing them, were also elaborated.

Register for trolley use, such as by scanning a QR code: An inconvenience to every trolley user when most of them obey the rules.

Scale of the problem

As the problem of trolley abandonment has been so widespread and ongoing for so long, numerous statistics are available that highlight the scale of it in Singapore.

For example, in 2015, FairPrice said it alone lost about 1,000 trolleys from more than 90 of its stores, costing it more than S$150,000 in trolley replacements, repairs and manpower to retrieve the trolleys.

Other supermarkets that also suffer the problem have not even publicly stated the costs they incur.

Sheng Siong, for example, demurred and declined to elaborate when asked to comment previously.

There are apparently hotspots in Singapore where trolleys appear to be abandoned at a higher frequency.

Over the years, Jurong West and Rivervale in Sengkang have emerged as areas where FairPrice staff are witnessed often enough doing unproductive work for a few hours each day in public, by going around the estate to collect abandoned trolleys.

FairPrice employees in Jurong West, in particular, have to do trolley retrieval runs around the neighbourhood twice every day at 9am and 2.30pm, and each trip takes about two hours.

Interestingly, a segment fingered as the main culprits who abandon trolleys is the elderly -- or, at least, they are the ones accused of taking trolleys without returning them in Rivervale, as per one resident in the Sengkang estate.

For those who think the abandoned trolley problem is a Singaporean issue, it is not.

It is a worldwide phenomenon that has spawned a lot of handwringing and even a philosophical tract/ meme that has been circulated widely online. 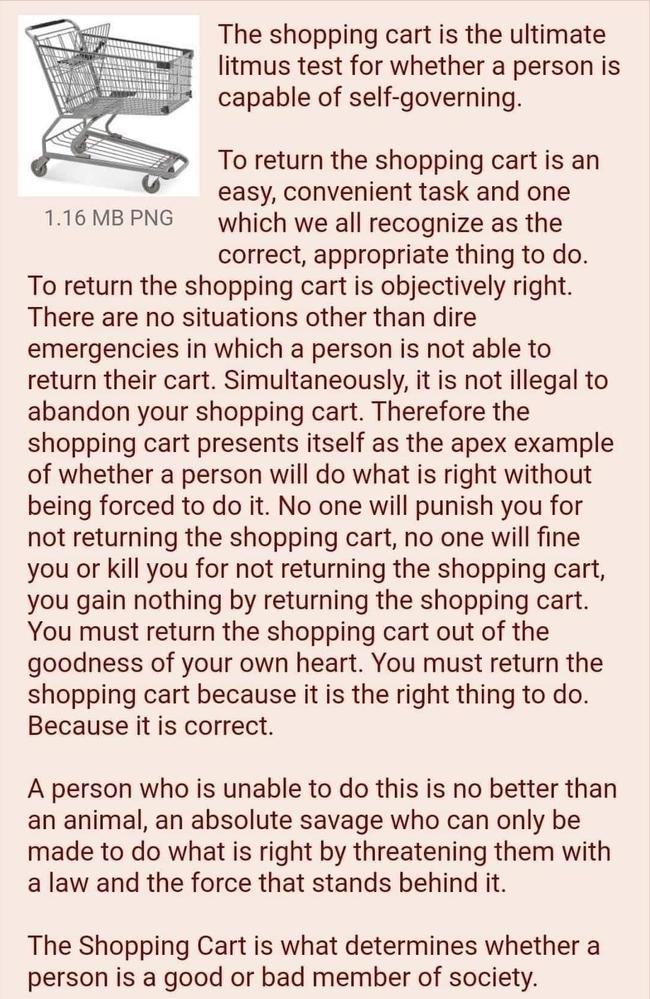 What can the public do?

The public can report abandoned trolleys to the OneService App and FairPrice's help centre, but it was previously reported that there was a lack of response to such feedback.

But as an indication as to how widespread and perennial is the abandoned trolley problem: The Municipal Services Office (MSO) actually developed a "Spot Abandoned Trolleys" feature in its OneService app, which was launched in April 2016.

Five supermarket chains, FairPrice, Sheng Siong, Mustafa Centre, Giant and Cold Storage, are on board, together with furniture chain Ikea, which joined in March 2021.

The MSO, which is under the Ministry of National Development (MND), received 6,559 reports of abandoned trolleys in 2021 through the app, The Sunday Times previously reported.

An MND spokesman attributed the higher number of reports in 2020 over 2019 to increased downloads of the app.