A bride in Singapore posted a cheeky TikTok video on Sunday (Feb. 20) asking if people knew where her groom went, as he did not show up on their wedding day. 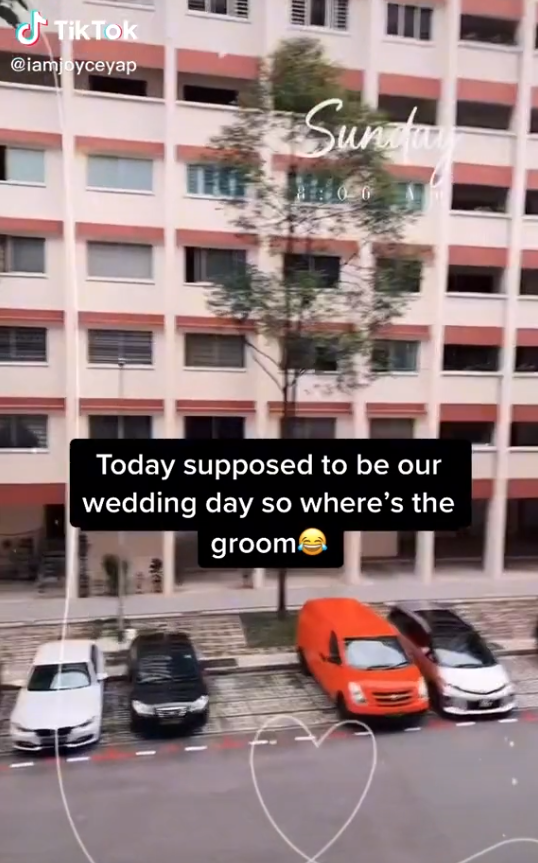 She later revealed that both her and her groom contracted Covid-19 just days before their wedding day, and subsequently postponed the wedding by a month.

The bride explained in greater detail what had happened in videos uploaded to her TikTok account, @iamjoyceyap.

Wedding had to be postponed after both of them tested positive

She shared that on Feb. 14, the couple had gone to collect their marriage certificate from the Registry of Marriages (ROM) in preparation for their wedding on Feb. 20.

In her video, she said that her fiancé started to feel unwell after that.

He took an ART test, and unfortunately, it came back with a positive result.

They called the wedding coordinator to inform them about his positive result, but was told that any postponements would result in extra charges.

They then decided to keep to the original date, as the groom would have completed the five-day isolation period by then, and hopefully would have felt better too. However, she tested positive a few days later on Feb. 17.

The couple was left with no choice but to postpone the wedding and to pay the additional cost.

Made calls to vendors, wedding guests and ROM

After the bride tested positive, the couple called up their relatives and friends to inform about the postponement of their wedding, and reminded them not to show up on the original date.

They also had to inform their bridal studio, makeup artist, gown and suit vendors, solemniser and bridal company about the sudden changes.

"Super thankful that everyone has been so understanding and easy to work with," wrote the bride. Changing the wedding date last minute was not much of an issue legally either, as ROM gave them the go ahead for postponing the wedding.

They will have to get married within a year of when the the notice of marriage was filed and pay a S$25 administrative fee. "[I] just hope we can get married next month without any issue again," wrote the bride.