One man beat up another man inside a food shop in City Gate along Beach Road on Feb. 22, at about 1am.

The entire incident was captured on the shop's closed circuit television camera and put up online where it has been viewed hundreds of thousands of times.

After the victim was knocked out, the aggressor left the shop and was seen in a series of videos threatening the shop's owner and being restrained by security.

These videos have been taken down though, but one can still be viewed here.

In response to queries from Mothership.sg, the 40-year-old Singaporean shop owner, who was seen dressed in grey, described what he saw happen before the altercation in the shop.

According to him, the victim showed up at his shop at about 1am when it was near closing time to buy takeaway food.

The shop owner said the man then left the shop as he did not have enough money with him and wanted to retrieve some money before coming back.

However, the man then did not come back to the shop.

The shop owner then saw the victim standing outside in front of Beach Road.

The aggressor was also there.

The victim then walked back to the shop and the aggressor came in.

The shop owner did not notice anything amiss at that point.

The aggressor then looked at the food in the shop as the victim was about to leave having paid, but then stayed back to look at the food some more as he appeared to want to buy more.

The aggressor then accused the victim of staring at him.

The victim then said he was only looking at what else he wanted to buy, and the aggressor challenged him to a fight.

At this point, the shop owner shifted the shop's CCTV camera to ensure he captured the premises and the two men inside.

All these occurred according to what the shop owner recalled and were not captured in the video recording.

The victim did not want to fight when challenged, and wanted to leave but the aggressor blocked his way.

The first two minutes of the video put up online then showed what ensued: The aggressor continued to taunt the victim as the shop owner tried to dissuade the two men from teeing off.

The aggressor was then seen at one point throwing a stool at the victim, who retaliated with a shove.

It was during this exchange that the victim allegedly hit the aggressor in the face while trying to shake him off, according to the shop owner.

After this exchange, when things appeared to get more heated, the shop owner continued to dissuade the men from fighting but to no avail.

The two men then exchanged a flurry of punches and fell to the ground.

Both men then got up, with the aggressor resuming his taunting and shoving.

When the victim wanted to pick up his belongings, he was roughed up with shoves.

When he bent over to pick up his phone, he was kicked in the face and knocked out cold.

He remained face down on the ground for more than one-and-a-half minutes.

When this exchange took place, the shop owner was not around as he said he went to seek assistance from security as he himself was shoved into the wall by the aggressor at one point.

The surveillance footage in the shop showed the victim slowly getting up to his feet as his mouth was bloodied.

Subsequent footage shot on a mobile phone by the shop owner's partner showed the aggressor continuing to taunt the shop owner and victim while being restrained by security. 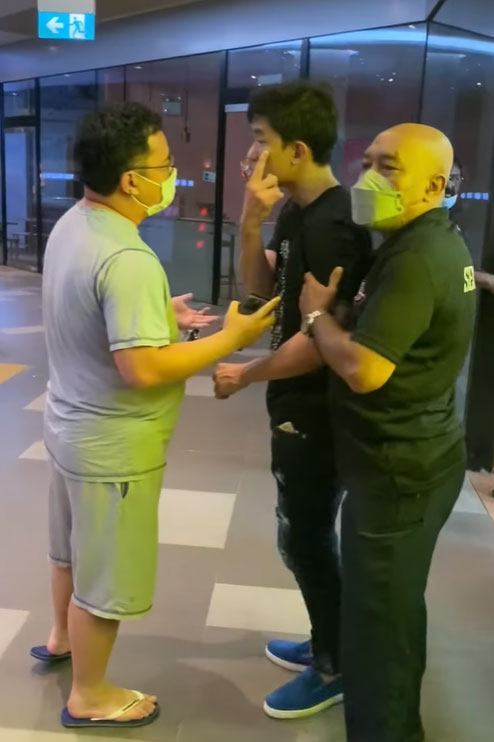 The aggressor was not wearing a mask the whole time, and was seen and heard spitting more than once on camera.

At one point, a man, believed to be a friend of the aggressor, showed up and tried to restrain the aggressor.

The shop owner said about four to five police officers arrived on the scene subsequently and arrested the aggressor.

The shop owner said he was not even sure why the fight took place, but attributed it to the victim and aggressor bumping into each other in his shop.

When asked if it was a staring incident, the shop owner said it was not, but added that both men appeared drunk.

He said: "It was just a terrible event."

The case is under investigation.