A TikTok content creator in Singapore came under fire after posting a video of a man and claiming that he was staring at her in the gym.

Online commenters then came to the defence of the man, whose face was fully visible in the video.

After initially turning off comments on all of her videos, she later posted an apology and deleted the video of the man.

The TikToker, Michelle Lim, uploaded a video on Jan. 19, which appeared to be recorded with a phone placed behind a gym machine and aimed at a man in a white t-shirt. 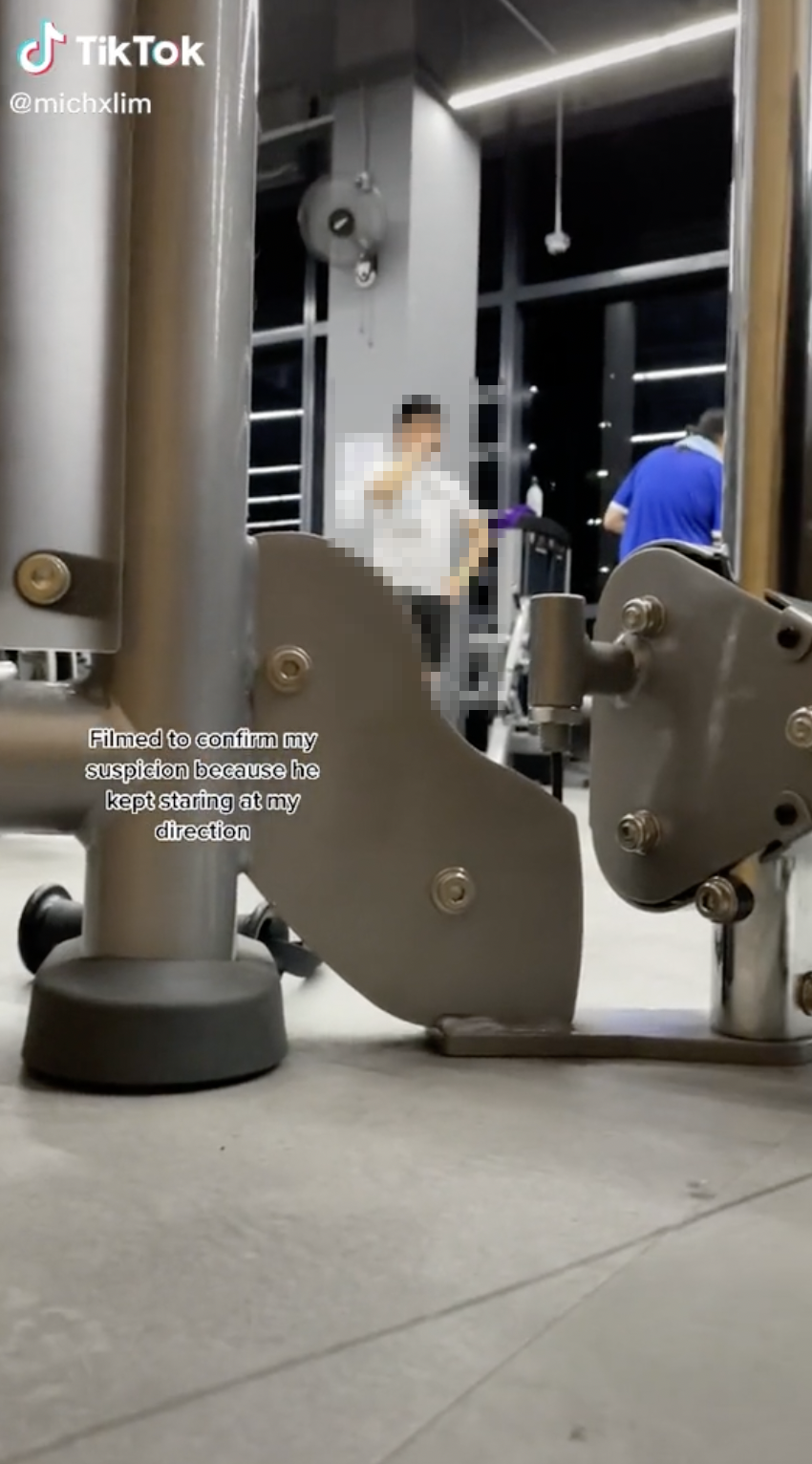 Text in the video clip said that she recorded the video to confirm her "suspicion", because the man "kept staring at my direction".

While Lim did not state what exactly she suspected the man of doing, her caption included the hashtag "#gymcreeps".

The caption also said, "Exercise: 10 sets of staring at girls in the gym", apparently referring to what she saw the man doing in the gym. "Remember to sanitise before using machine guys", said another line included in the video clip, possibly referring to the fact that the man was touching his nose in the video. 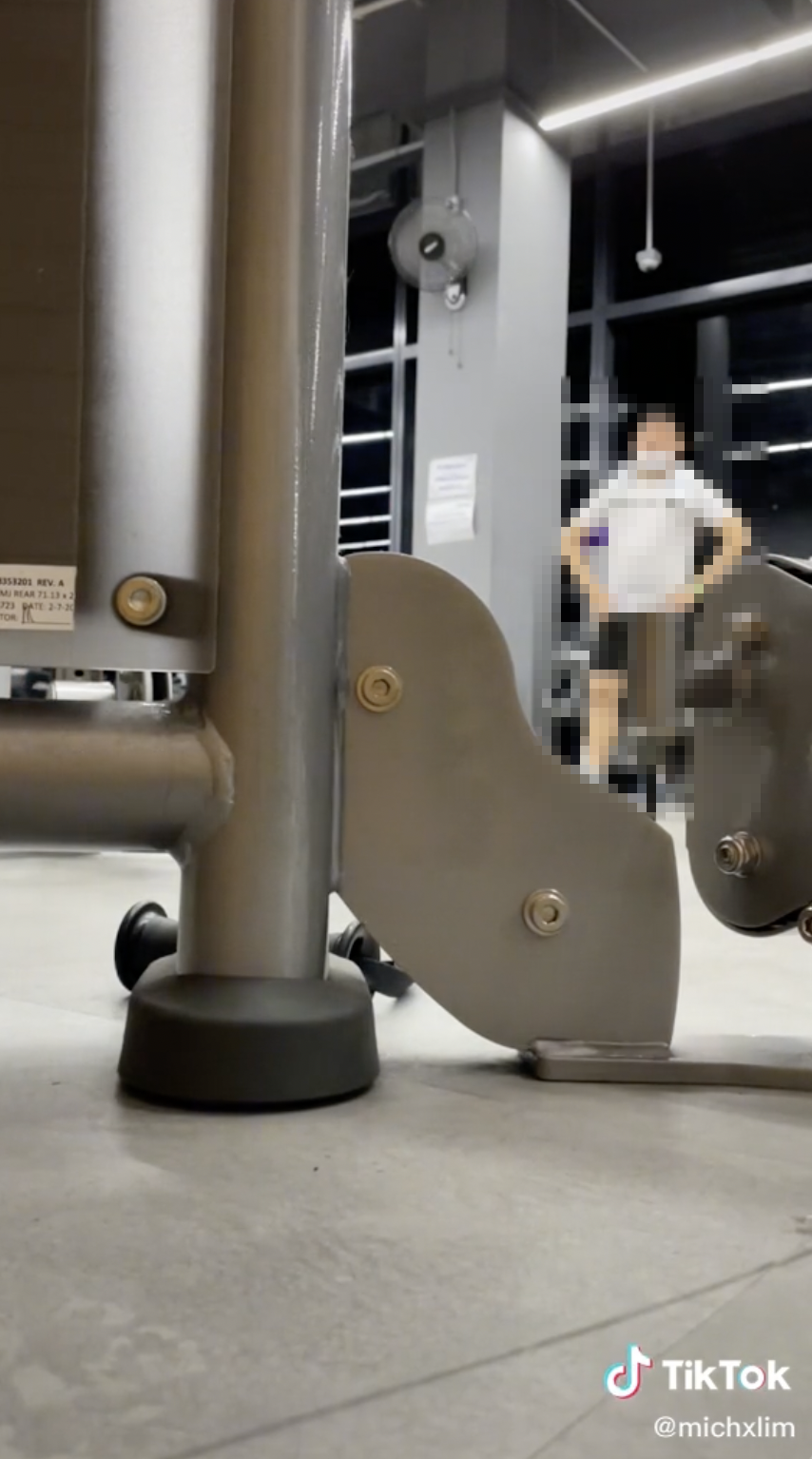 "Watch how he slowly checks out the girl", said another line in the video, as the man paced around the gym, appearing to pause for a moment while looking in her direction.

It is not clear whether "the girl" referred to Lim herself, or someone else.

However, it is not clear where exactly the man was looking at, as the video was taken from a distance with exercise equipment partially blocking the camera.

An anonymous TikTok account, @dontanyhowrecord, appears to have been created to respond to Lim's video.

The sole video on the account claims that the person who was allegedly "staring" at Lim was watching an episode of Mr Bean. 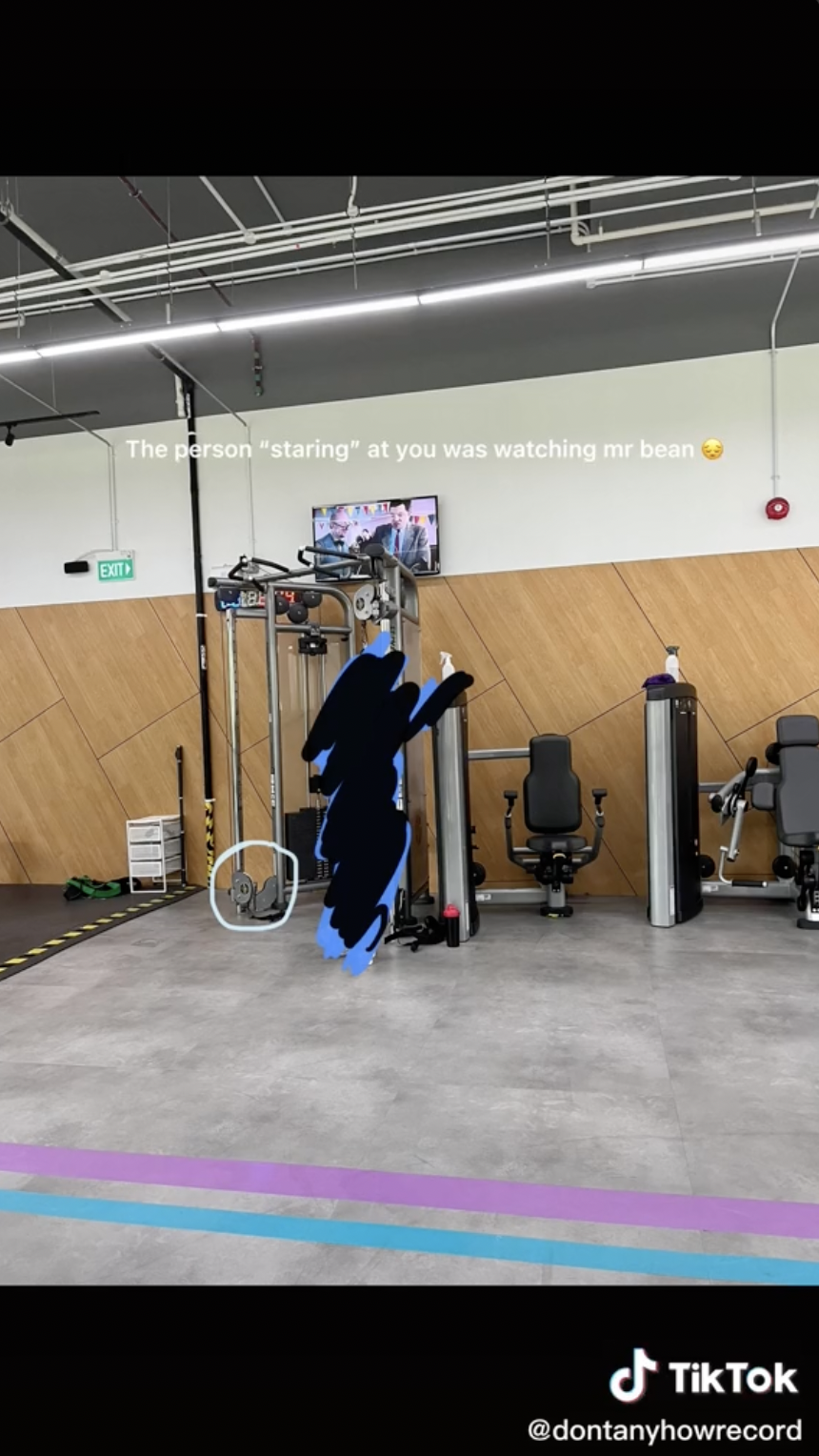 The video — apparently taken in the same gym — shows a TV screen located above the machine from which Lim recorded her video.

A white circle on the video showed where Lim's camera had likely been placed.

TikToker turns off comments on all videos, then apologises

Lim turned off comments on all of her videos, before coming out with a statement on the matter — comprising three frames of text on a plain background — on Jan. 20.

Her statement contained her account of what happened in the gym before she started to film the man, her explanation of why she uploaded the video, and an apology.

"I remember feeling uncomfortable while doing my walking lunges as we made eye contact frequently," she wrote, saying that she "felt unsafe" at that point, and decided to film the man "for evidence", in case anything happened to her.

She also said she left the gym "shortly after", and looked through the video while heading home.

"Approaching him or the staff didn't come across my mind," she added.

She explained that she edited and uploaded the video to put across a point, which was "that everyone should feel safe at a public space that is commonly dominated by the males. And females should be free to choose their outfits based on their likes and preferences and shouldn't be judged for it".

However, she also conceded that there was "no concrete evidence" to show that the man was staring at her, given the fact that it had been filmed discreetly from an "awkward angle".

She also acknowledged the potential harm that her video could have caused to the man's reputation.

"I'm sorry to the guy I've posted in the video - Also, I don't have your contact. Please reach out to me so I can apologise to you personally too," she wrote.

She also deleted the video of the man.

You can see screenshots of her statement here: 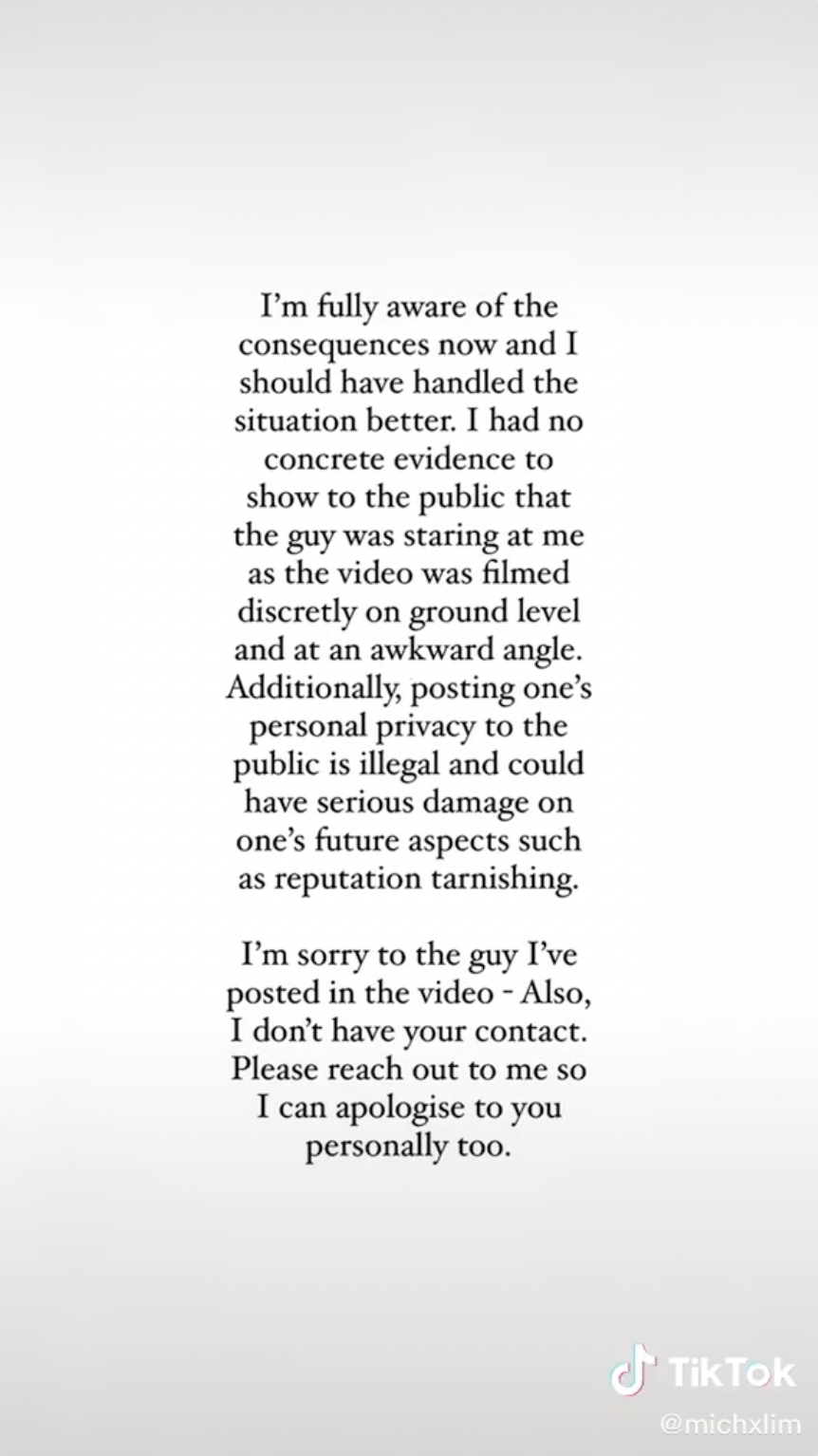 "Hi, my name's Michelle and I go by my social handle: @michxlim. You probably have seen the video where I have filmed and uploaded a particular gym user who happened to be at the gym the same time as me on Tiktok. I have since deleted the video.

I remember feeling uncomfortable while doing my walking lunges as we made eye contact frequently. I felt unsafe at that point of time and when I switched to my next exercise at the cables, I decided to film him for evidence (in case anything happened to me). It was getting late, I left the gym shortly after and looked through the video while I was on the way home. Hence, approaching him or the staff didn't come across my mind.

While I was editing the video, I just wanted to get my point across that everyone should feel safe at a public space that is commonly dominated by the males. And females should be free to choose their outfits based on their likes and preferences and shouldn't be judged for it. That's all.

I'm fully aware of the consequences now and I should have handled the situation better. I had no concrete evidence to show to the public that the guy was staring at me as the video was filmed discretly on ground level and at an awkward angle. Additionally, posting one's personal privacy to the public is illegal and could have serious damage on one's future aspects such as reputation tarnishing.

I'm sorry to the guy I've posted in the video - Also, I don't have your contact. Please reach out to me so I can apologise to you personally too."