[UPDATE on Jan. 10 at 3:55pm: This article has been updated with new information from the couple]

A man in Singapore, Marcus Lim, had planned to hold his wedding at the Turkish restaurant Arkadaş Café in Fusionopolis.

The couple had planned their wedding at the restaurant as they liked the food, and for "sentimental reasons" as it was where they had several dates, including their first date.

However, the wedding had to be called off just four days before it was supposed to take place on Jan. 8, 2022.

Lim took to Facebook on Jan. 7, to explain the situation to his wedding guests and to issue a "warning to all couples looking to tie the knot".

Lim's post initially did not identify the venue as Arkadaş Café.

However, certain comments on the post led some to identify the venue, as it was stated on a wedding invitation with the details of the occasion.

Lim also confirmed that this was indeed the venue he had posted about, saying, "We didn’t want to name because they’re so well reviewed it’ll be hard to make a difference".

In his post, he said that the venue had cancelled on the couple after they rejected the venue's last-minute attempt to increase prices by 37 per cent.

He also outlined several other issues faced in the course of five months' worth of wedding planning.

The restaurant, however, told Mothership that they "totally refuse" the claims, calling them "baseless defamation", and said Lim’s side of the story was “totally falsified”.

Here are some of the issues Lim outlined in his post, along with the restaurant's replies.

Did the restaurant try to raise the price at the last minute?

A spokesperson for Arkadaş Café told Mothership that the couple was initially quoted, on Aug. 31, 2021, a price of S$55 per guest, before a 10 per cent service charge.

This corroborated with a screenshot of a conversation over Facebook Messenger provided by Lim: 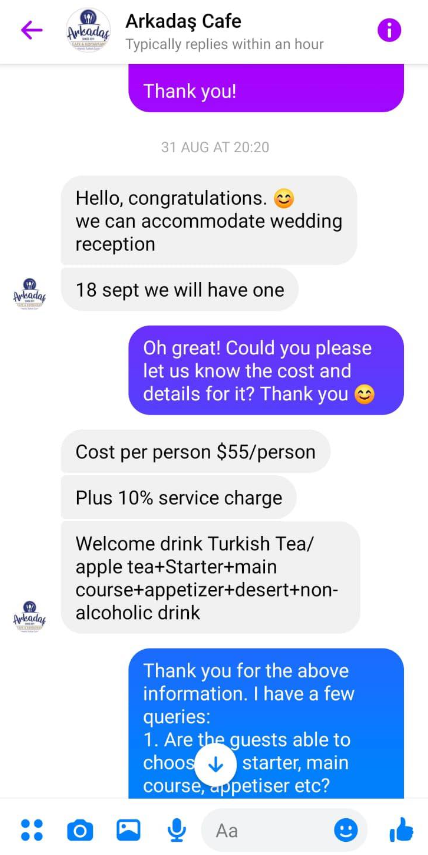 According to the spokesperson, the couple were later quoted a revised price of S$75 per guest instead -- before the same 10 per cent service charge.

This was because the couple "finalised the menu" late, only on last Sunday, and had opted to customise individual meals for "different preference of the guests".

"Marcus initially commented about the pricing, however we explained the reason of the change in pricing and later he confirmed the pricing with his WhatsApp message that they don’t have any issue with the pricing," said the spokesperson.

What was the issue with the food pricing?

Lim, on this part, shared more about the price increase.

He said he was surprised by the revised quote of S$75 in January 2021, as his understanding was that the options for guests had been finalised on Dec. 12, 2021, the day the couple had a "tasting session".

Before being quoted the price of S$75 per guest in January, Lim said he and his partner had already "sent the list of exact orders per table to the restaurant a few weeks beforehand so they could prepare".

"All this while, including after the tasting session on Dec. 12, we’d not been told there would be any changes to the package, so we were a bit confused," said Lim.

Lim says he was "misled" into thinking that the menu option confirmed on Dec. 12 was "under the same package we'd agreed to initially".

Further screenshots from the WhatsApp group conversation in January showed a restaurant representative explaining that the "totally different pricing" was due to the menu being customised for each guest.

Lim then replied saying that he understood what was said about the difference in pricing, but asked why this was not made known to the couple when selecting the menu.

There was also some discussion about the quantity of the appetiser to be provided, including the restaurant representative saying:

"If you don't like the pricing, you can cancel anytime and check other places."

Did the restaurant cancel on the couple?

In Lim's Facebook post, and his further comments to Mothership, Lim said it was the venue that had cancelled on the couple.

The restaurant said in its statement to Mothership that the wedding's cancellation took place after Lim accepted their "cancellation proposal", which is not the same scenario as shared by Lim.

It also shared its own screenshots of the same conversation, in which the restaurant representative asked, "We consider you cancelled ???", to which Lim replied, "If you decide to cancel, I will accept your decision". 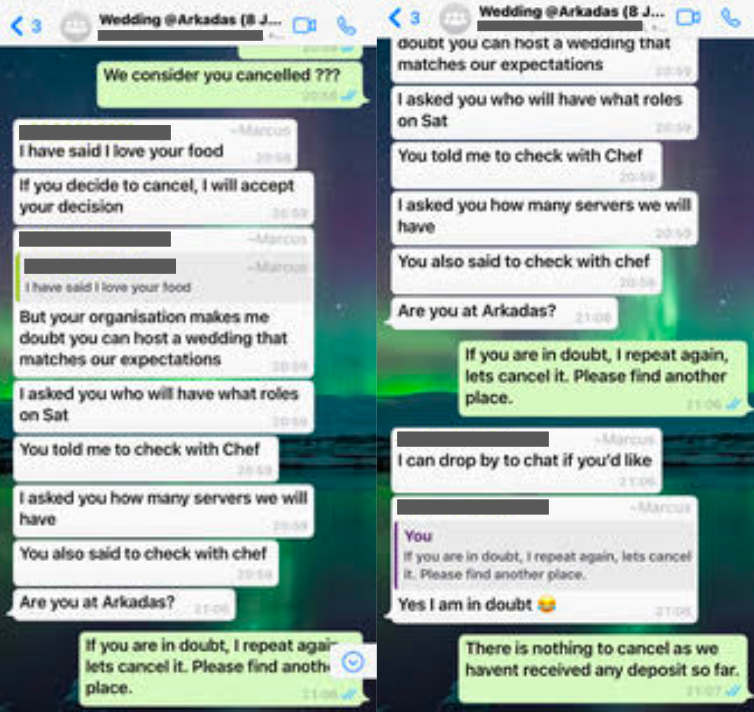 A subsequent message from the representative said, "There is nothing to cancel as we havent received any deposit so far."

The restaurant also told Mothership: "If our concern was money, then we wouldn’t propose to cancel as he had already mentioned that he had no issue with the pricing."

On the matter of leaving a deposit with the restaurant, Lim pointed out that there was no legal requirement for a deposit or downpayment to be made before the parties were contractually bound.

He conceded in his post however, that making a downpayment was something the couple "could have done better" and to have "chased harder" on it.

"While we’d gotten and accepted the quotation way back last August, we were brushed off every time we asked about whether we needed to make a down payment. This made it easier for [the owner] to cancel on us because he believed that we needed a signed contract to hold an agreement up in court," Lim said.

Were restaurant representatives professional throughout the process of wedding planning?

While the restaurant's statement does not address Lim's claims, it sought to highlight the fact that Lim had, on Jan. 3, "dropped by the restaurant unannounced".

Lim, the restaurant statement said, had been "looking for the owner in an uncooperative manner, intimidating the customers that were dining in the restaurant", adding that staff had to explain the situation to customers afterwards.

Lim disagreed with this claim, saying that he waved to Bob "from one corner", and had engaged him in discussions that were "civil throughout".

He added that the restaurant likely has CCTV footage, which they should release.

"I went down at around 9:20 pm and tried to negotiate, but they were firm in their decision to cancel, so we accepted [it]", Lim said.

He then followed up with a message that was sent to the group chat at 9:46 pm.

Lim also highlighted several other issues, which were also not addressed by the restaurant in their statement to Mothership. They include:

Reflecting on the experience, Lim shared that he and his fiancée were "devastated that all of the hard work that we put in had gone up in smoke so suddenly".

In the midst of dealing with their own emotions, Lim said he and his partner "knew that we had to inform our guests and vendors as quickly as possible so that they could adjust their own plans too."

"One of my friends had flown in from the UK, for example. We’re very touched that everyone was super understanding and accommodating. But we’re also sorry to have disappointed them because we knew how much everyone had been looking forward to this."

What will happen next?

According to Lim's post, his takeaways from the entire incident were three lessons: that a venue's management would see weddings as money-making opportunities, to pay attention to the team dynamic of venue staff while preparing for the event, and to always leave a paper trail to avoid "he said, she said" situations.

Lim said he and his fiancée were "still assessing" their options for seeking legal recourse, saying that while "most" of their wedding vendors had refunded them in either cash or credit, "there are some things that just cannot be recouped".