The Ministry of Health (MOH) will stop its current practice of highlighting the number of Omicron variant cases that are part of the daily Covid-19 cases, said Minister for Health Ong Ye Kung in a press conference on January 21.

This is due to the Omicron variant dominating the current infection wave. On January 20, there were 1,001 Omicron cases reported. 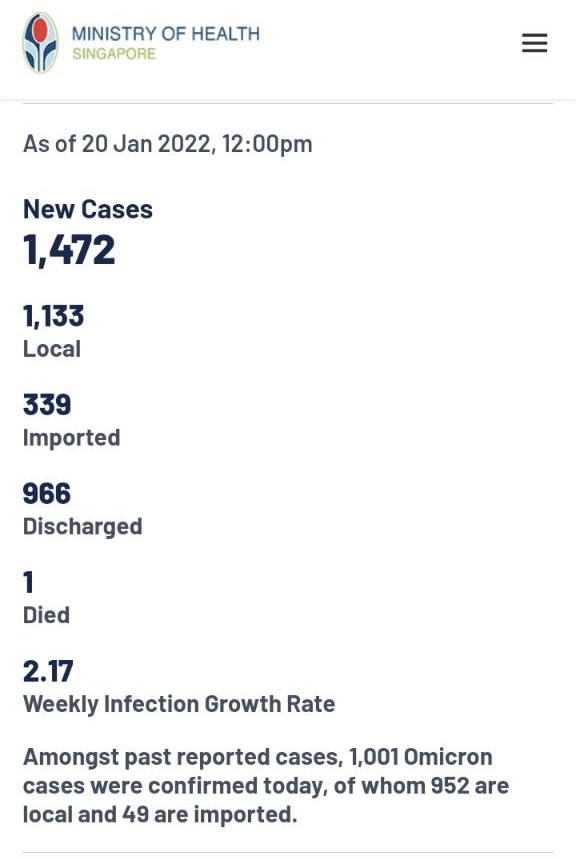 Since its discovery, more information about the Omicron variant has emerged.

According to Ong, individuals who are infected with the Omicron variant were found to carry a lower viral load and tend to recover faster.

They were also found to have less severe symptoms.

Given this information, MOH has made several changes to Singapore's vaccine policies and health protocols to adapt to the current Omicron wave, all of which were announced earlier today.

MOH will also be including a new number in its daily updates.

Ong said from the beginning of 2022 until now, the number of positive Covid-19 cases that were either well or had mild symptoms that were identified at GP clinics -- he called them GP-Protocol 2 cases because these cases will be instructed to follow Protocol 2 -- was not reported as part of the daily case numbers because it was small, at about 100 to 200 cases per day.

Because the Omicron variant produces less severe symptoms, GP clinics in Singapore have been prescribing Protocol 2 to an increasing number of patients who come to them.

"MOH has reviewed the situation and decided that it is better to include the GP-Protocol 2 cases in our daily updates as this will give a better picture of the epidemic situation in Singapore," said Ong.

As a result, the MOH daily updates will register a drastic increase in the daily number of new cases.

So far, the daily number of new cases that has been published in MOH's daily updates only counted Covid-19 cases that have been confirmed via a PCR test.

MOH's updates will now include both new Covid-19 cases that have been confirmed via a PCR test, as well as new GP-Protocol 2 cases.

These numbers will also be backdated to January 6.