On November 12, 1998, McDonald's Singapore decided to sell some fried chicken.

This would lead to what was eventually proclaimed in the Straits Times as the "Fried chicken war". A poultry version of Godzilla vs King Kong.

The Chicken McCrispy was actually launched in Singapore first before eventually making its rounds globally.

The McCrispy's development was led by the Singapore McDonald's team, with the backing of the "company's research and development expertise from Europe, the United States, Australia and New Zealand".

The McCrispy was a real big deal, apparently taking five years of R&D to come up with the final product. It was also supposedly less greasy than competitors.

The sales would prove to be quite immense. Sales reached over 10 million chicken units in less than half a year, but before the deluge of customers, came the advertising.

On Sunday, November 22, 1998, an advertisement for the McCrispy came on.

We tried finding the original commercial to no avail; in fact, we even emailed a few relevant parties to see if they had some copy of the commercial. It was a no from all of them, but do send us a link if you somehow have access to it.

However, we did find a commercial for their Spicy Szechuan McChicken. 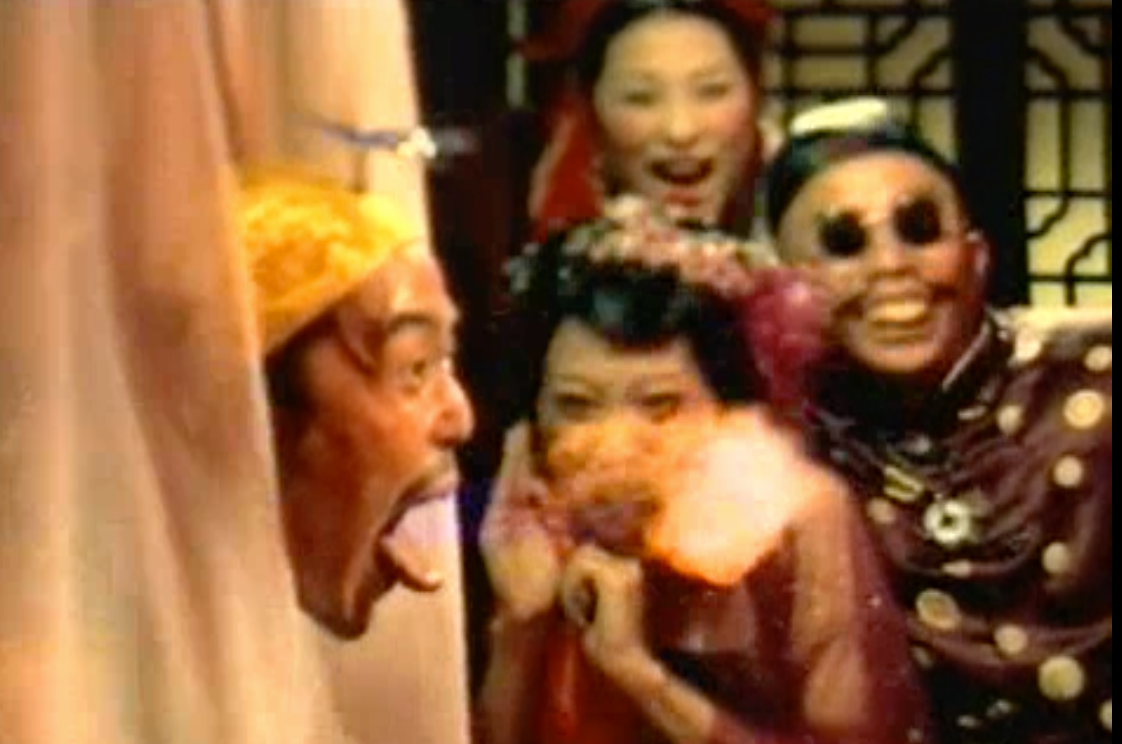 However, while we might not have the video itself, we have the next best thing.

A rather passive-aggressive description of the commercial a few days later in a Straits Times forum letter.

"On Sunday, a new McDonald's TV advertisement appeared, showing a number of people in a restaurant apparently eating the product and singing its praises with comments like "it's juicy" and "it's tasty".

The letter, written by one Michael Francis Murphy, then claimed that two people in the commercial were actually from an agency, even going so far as naming the two people that were involved.

"It seems somewhat biased therefore that in attempting to show how much consumers are enjoying this new product, the endorsement came from the employees of the very company which wrote the ad in the first place. How nice!"

"As the advertising agency for KFC, I felt that it is only appropriate to bring this to the attention of the Singapore public."

The then-chairman of Ogilvy & Mather Singapore, the advertising agency of KFC

Good job noticing us, the then-managing director of Leo Burnett, John Borzi, wryly responded to the forum letter in an ST letter of his own.

"I am glad to learn that... (the) chairman of Ogilvy & Mather Singapore, KFC's advertising agency, has been captivated by the launch of McDonald's new chicken product, Chicken McCrispy."

"Far from being biased, the two gave their personal views on the superior taste of Chicken McCrispy. More importantly, their sentiments seem to be representative of the millions who have tried the product and gone back for more."

He also flexed some numbers as well.

"To date, over one million Singaporeans have tasted the newest and best chicken product in the country."

The numbers were real impressive, considering the McCrispy had only been introduced for about 15 days.

He also said that the McCrispy was a "superior chicken alternative".

ST also contacted the Ogilvy chairman who had sparked all this off with the initial forum letter.

When asked why he had done it, the man said that he was "simply making people aware of the fact that these are not real people". These referring of course to the people in the ad.

When asked about the lofty sales, another KFC personnel had a possible explainer for the numbers touted by McDonald's.

"'Maybe their own consumers are switching from burgers to chicken,'"

For good measure, KFC took out an advertisement on November 27 saying:

"We want to thank these other fast-food restaurants. Because through their efforts everybody in Singapore has been able to compare and realise that delicious fried chicken still comes only from KFC".

Before you think this was a very, VERY clear shot at McDonald's, Murphy insisted that it was not.

"We're not naming any restaurants."

"We're not naming any restaurants. If the public does judge it as McDonald's, that is from their perception."

And just like that, a greasy line (less greasy for McCrispy) had been drawn in the sand.

Many weighed in on the ultimate chicken in Singapore.

Another ST article on Dec. 3, 1998, did a man-on-the-street kind of take on the rivalry. Some were vehemently on KFC's side:

Others supported the McCrispy:

"The testers were also asked to describe their ideal fried chicken.

Or how about your favourite canteen food instead:

One was very clear on her true allegiance:

So, as you might expect, there was no definitive answer.

The proceedings read like a closely watched election. By Tuesday, the early votes overwhelmingly favoured KFC.

The newcomer looked like it was going to be roundly trounced, but the tables turned over 24 hours.

According to BT, a "surge of voting" resulted in McDonald's gaining the upper hand. They noted that the total votes were about four times more than their usual polls.

A victor was crowned, or at least it would have been if not for some real shady goings-on.

They noted that many of the votes cast in the "latter part of the week" were from a "small number of local Internet servers".

All the votes cast via the aforementioned servers favoured McDonald's. The poll appeared to be sullied.

BT decided to take the results until Tuesday, when the voting was still apparently untampered, and use that as the final score.

As time went on, the beef petered out, with some notable flare-ups.

Price, which wasn't really the focus initially, was thrust into the spotlight.

In the ad, they compared the price of their two-piece Chicken McCrispy with KFC's two-piece fried chicken.

This didn't sit well with KFC, who took out ads of their own a couple of days later, showing exactly how those additional 95 cents were justified.

But more or less, the skirmishes became rarer as each solidified its place in Singapore.

Interestingly enough, this "good-natured" joshing spilt over to other markets the McCrispy was introduced in.

For example, in Thailand, a radio ad taken out by KFC featured a character named Ronald trying to steal Colonel Sanders' recipe.

A Bangkok Post article on Feb. 24, 2000, covering the story, quoted one person who now viewed the colonel in a different light.

"A consumer, meanwhile, remarked that the KFC campaign had changed the image of Colonel Sanders from that of a kindly old gentleman to a rather aggressive person."

Beef to the future

McCrispy launched its comeback in 2020, KFC is still chugging along well.

But there doesn't seem to be anything remotely like the rivalry back in the '90s.

We asked McDonald's and KFC whether there had been any shift in sales since the reintroduction of the McCrispy, but they both very kindly declined to comment.

Perhaps the rivalry isn't that fierce anymore, maybe advertising has progressed from the more combative stance of earlier years, or they are more assured in their respective positions.

But it is perhaps pertinent to look at the difference in context in the rivalry during these two eras.

If KFC and McDonald's back in the 90s were like Godzilla vs Kong, perhaps a more apt comparison now would be King Caesar vs Rodan, still a good battle, but maybe with less on the line.

I asked my colleague, whose name rhymes with Wandrew Dong, if he would consider either the two juggernauts to be the best fried chicken in Singapore.

For context, Dong is a real fried chicken connoisseur who tasted 12 different types of fast-food fried chicken to evaluate the best one.

While he did not have either as his best-fried chicken, KFC's spicy chicken was in his top three, he placed KFC's chicken way higher than the McCrispy.

His favourite was Texas Chicken.

What about quantitative data?

A poll on our Telegram saw these results within the first six hours. 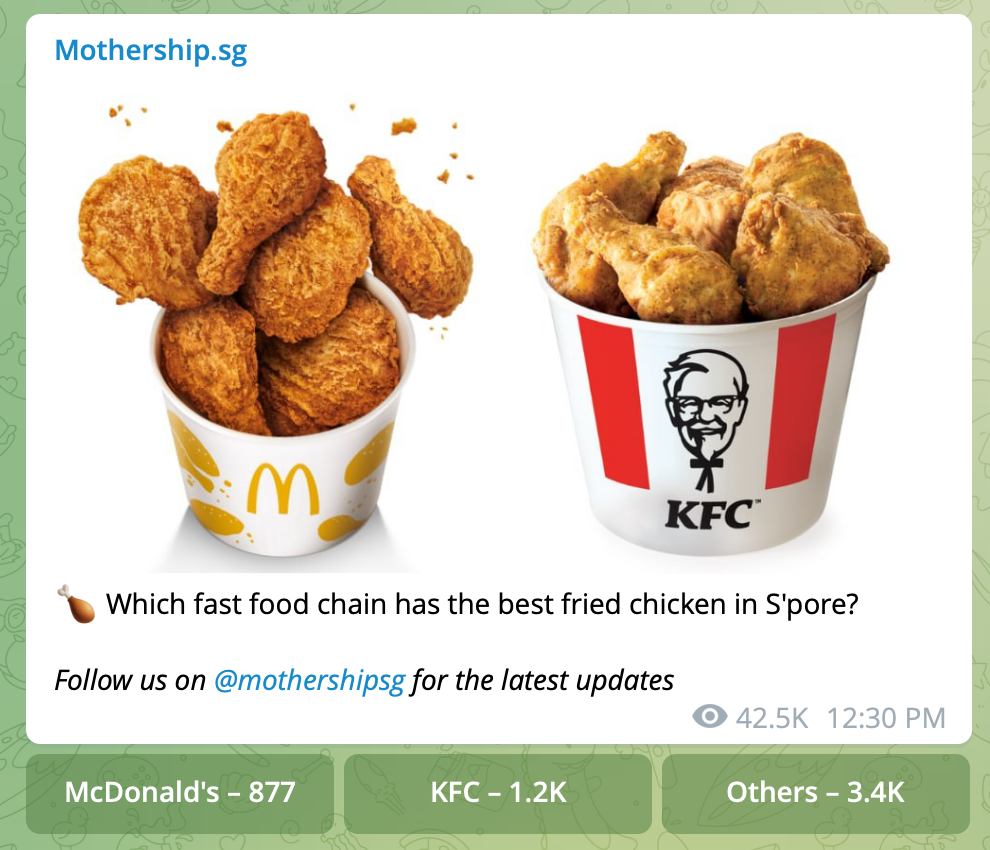 Here it is a day later. KFC edges out the McCrispy, but both are resoundingly defeated by vaunted name brand "others".

A much earlier IG poll Mothership did also saw another contender take the throne. The two may very well still be in the top bracket, but the competition is nowhere as limited as before.

An ST Forum letter back-and-forth over who has the "best chicken product" might ring hollow when so many other legitimate contenders are waiting idly by in the wings.