In a case of what appears to be reckless and dangerous driving along the Pan Island Expressway (PIE) that could have ended poorly, a Honda Civic driver brake checked a motorcycle and then proceeded to speed up and swerve dangerously close to him.

The interaction, which reportedly occurred around 8:30am on Jan. 19, was caught by another car's rear camera and has angered many online.

In a video posted by Facebook page SG Road Vigilante, a motorbike and a black Honda Civic can be seen cruising along the expressway, with the motorbike in lane four and the car in lane three.

The car then changes lanes to be behind the motorbike. After a couple of seconds, the motorbike flashes its right blinker and begins to filter into lane three.

At the same time, the Honda Civic also moves into lane three, speeding up to pull ahead of the motorbike. In doing so, it passes dangerously between the motorbike and the car next to it in lane two.

Once it is in front of the motorbike, the car suddenly slows down, essentially "brake checking" the motorbike.

The motorbike rider swerves out of the way in time, giving the driver a sideways glance and an annoyed gesture.

As the motorbike continues on its way, the Honda Civic once again speeds up to catch up to the motorbike and flashes its blinkers twice.

The actions of the Honda Civic driver clearly aggravate the motorbike rider, who gestures angrily at the car before speeding up and riding away. 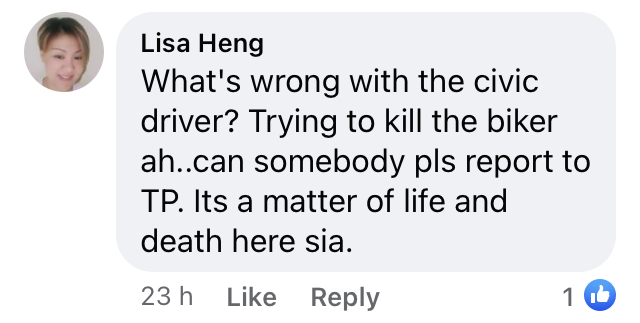 Some people criticised the motorbike rider's behaviour as well. Other viewers questioned whether something may have happened between the two vehicles prior to the footage shown in the video. 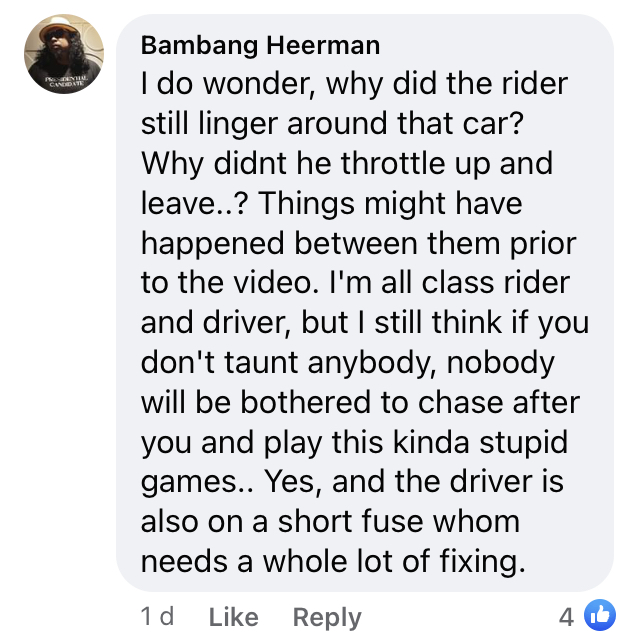 Ultimately, one commenter stated, no matter what happened beforehand, the situation was very dangerous for the motorbike rider. You can watch the full video of the interaction here: