It's been said that the internet never forgets.

That's definitely true of a 2019 photo taken in Singapore, which resurfaced recently on micro-blogging platform Tumblr.

Here's the photo in question:

The photo shows a mother-and-child pair of Giant Anteaters, taken just about a month after the pup's birth in 2019.

The pup was later named Estrella after a public voting exercise.

She was the second pup to join the Giant Anteater family in Singapore's River Safari (since renamed River Wonders) after Estrella's older sibling Leona was born in 2018.

The photo was apparently rediscovered sometime in Aug. 2021, when Tumblr user snailtongue posted the photo with the caption: "The newborn giant anteater pup with her mother at River Safari."

It has since attracted no small amount of commotion on the microblogging platform, with over 10,000 likes, while getting shared by 7,000 users who reblogged the post.

Many reacted to just how smol the baby anteater was, relative to its mother.

But others noted a fascinating detail: There appeared to be a panda's face in the photo as well. 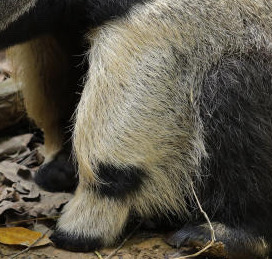 "im honest to god on the verge of tears. she has a panda bear on her leg", wrote user logarto.

The black and white patterns on the anteaters' fur help to break up their outline as part of their camouflage.

In particular, the pattern on their front legs has been noted to resemble the white head and black eye patch of a panda.

These black-and-white patterns could be seen on baby Estrella's front legs too:

The Giant Anteater is one of the animals that can be seen on the Amazon River Quest boat ride at River Wonders.

Giant anteaters are the largest of the four species of anteaters, and can grow up to 2m in length from the tip of their snout to the end of their bushy tail.

They use sharp, curved claws to tear open anthills or insect mounds, and long tongues to probe inside for insects. They are able to flick their tongue up to 160 times per minute, and have no teeth.

Currently classified as vulnerable according to the International Union for Conservation of Nature, they are native to South America.

Top image via Wildlife Reserves Singapore and screenshot from Tumblr