A driver has given cyclists more reasons to cycle in twos for safety, after knocking down a cyclist who was following the applicable road rules.

The incident was filmed from another vehicle and uploaded on the Beh Chia Lor Facebook page on Jan. 24.

According to the post's caption, and timestamps on the video, this took place on the morning of Jan. 20, at around 7:14am.

The footage shows the driver making a sharp left turn into the West Crest housing estate along Bukit Batok West Avenue 8, hitting the first of three cyclists who were moving along the road in single file.

The cyclists were keeping to the left edge of the road, as is required of them by law.

The impact sent the cyclist tumbling to the ground.

While it is not clear whether the driver was aware of what had happened, the car did not appear to slow down, proceeding into the West Crest estate after knocking the cyclist down.

Driver was signalling left, but had come up from behind

The driver had signalled their intentions to turn left, for about eight seconds before making the turn.

However, it is likely that the first cyclist did not see the signal until it was too late.

This is because the driver did not manage to overtake the cyclists completely, before executing the turn.

The video footage shows that the driver approached the cyclists from behind, after passing through a junction while the cyclists were still some distance away.

The car can be seen speeding up while veering slightly into the right lane — likely so that the driver could overtake the cyclists and turn left ahead of them.

The car which recorded the incident was likely planning to turn as well, as the driver's turning signal can be heard in the recording.

However, the other driver stayed behind the cyclists and waited for them to pass before turning.

Reactions to the incident could be classified under a few main schools of thought, each with varying degrees of relevance and intellectual sophistication:

Imagine cyclists were motorcyclists instead

Driver did not save much time Both parties should be more careful, but cyclists are more at risk 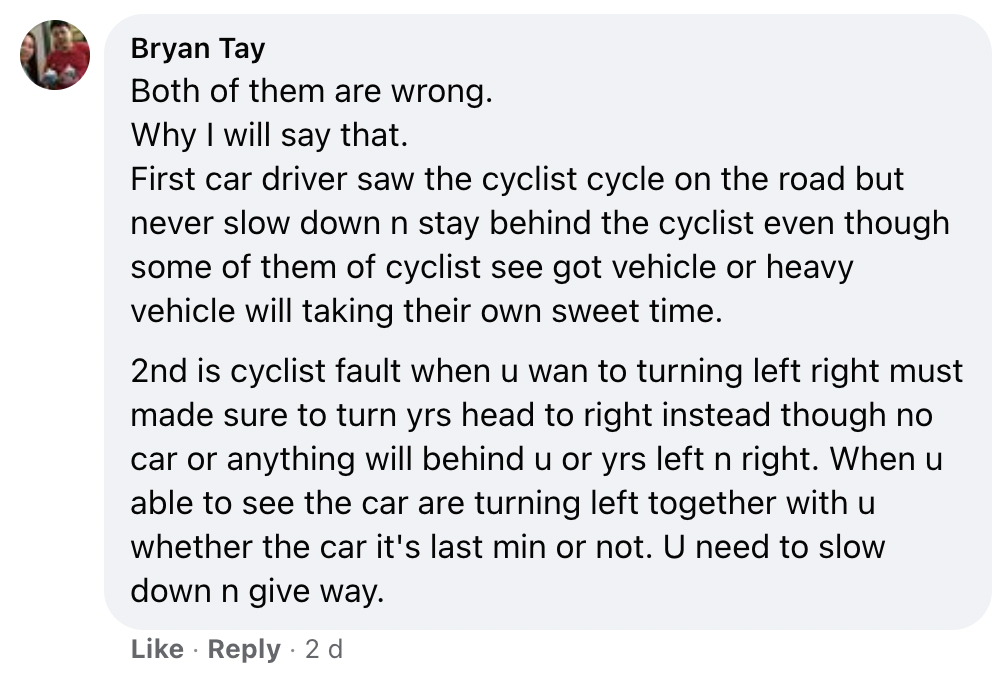 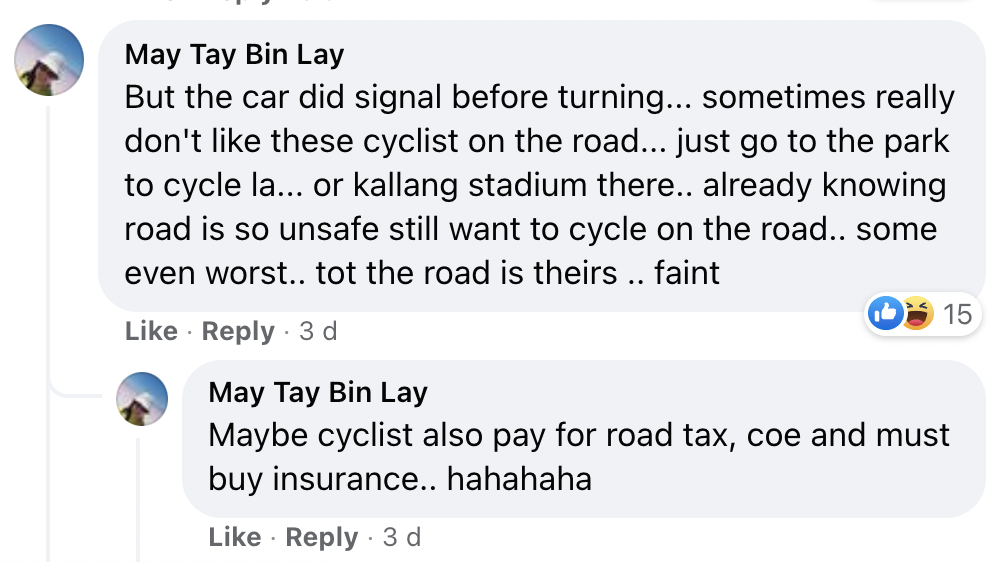 Cyclists ride in twos for safety

Following a review of cycling rules by the government-appointed Active Mobility Advisory Panel (AMAP), the authorities accepted the recommendation that cyclists should be allowed to cycle two abreast for reasons of safety and visibility, among others.

While cycling in twos means that pairs of cyclists will likely take up an entire road lane, actions like those of the driver in the video give cyclists more reasons to do so.