A video of a female student getting beaten and kicked by two other girls has been widely circulated on Facebook.

The video was first put up in Facebook group Complaint Singapore, where it has since garnered over 3,500 shares after being posted on Jan. 17.

A total of four people are seen in the video, with two wearing a blue pinafore. It is presumed that at least five people were present, including the person recording the video.

One of the girls in the pinafore was chased by another girl in a white t-shirt, who is barefoot. The girl in the white t-shirt then smacked the girl with what appears to be a piece of footwear.

Another girl dressed in black then yanked the ponytail of the girl in uniform, throwing her to the ground.

She kicked the girl while she was on the ground and then hit her head repeatedly using her hands.

She continued to kick the girl in uniform several times, with one kick to her face.

The other girl in uniform was not seen taking part in the incident.

At the time of writing, the Facebook post claimed that the location was at a multi-storey car park at Block 229 Compassvale Walk, which is in Sengkang. The nearest carpark to Block 229 is at Block 228D, located next to the HDB block. 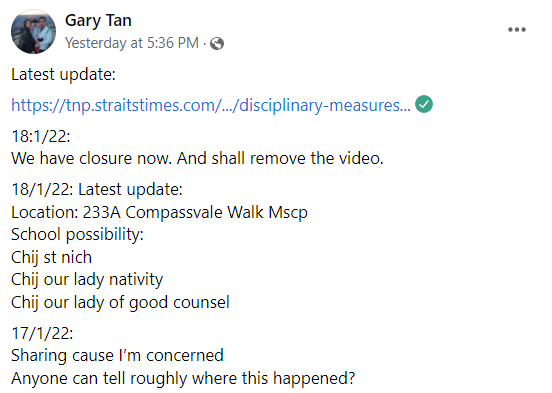 It is unclear when the incident took place.

Comments on the post mostly expressed disapproval of the behaviour, calling for the matter to be investigated.

A couple of schools, such as CHIJ St. Nicholas and CHIJ St. Joseph's Convent, were listed in the Facebook post as schools that have similar uniforms.

CHIJ St. Nicholas Girls' School told Mothership that they have looked into the issue and can confirm that the girls are not from their school.

In response to Mothership's queries, the police said that a report has been lodged and investigations are ongoing.

According to a Ministry of Education (MOE) spokesperson quoted by The Straits Times, disciplinary measures have been taken against the students seen in the viral video.

The school is also aware of the incident and has taken "educative actions, including the appropriate disciplinary measures".

No school name was revealed.