On Jan. 14, NUS student Koh Xiuwen posted on Instagram about her unsavoury experience with Chicken Hotpot eatery in Sengkang.

The Singaporean student felt that the eatery's motive was to pressurise her into removing the review, over fears that her academic life at NUS would be affected.

Koh only found out about the merchant's actions, which might be a potential breach of privacy and data protection, when the National University of Singapore (NUS) called her on Jan. 6.

This was three days after she uploaded the negative review to her personal Douyin page.

Chicken Hotpot: "due diligence" to "ensure it is not a scam or fake account"

While the spokesperson for Chicken Hotpot was originally hesitant to provide an official response to the Instagram post, they have since released their version of events on Facebook.

The post is accompanied by screenshots of CCTV footage from the store, and accused Koh of posting a "misleading" and "malicious" video.

Among the points that Chicken Hotpot made, the most pertinent appeared to be the fact that they did indeed contact NUS over the bad review.

Mothership has also received confirmation on this from another source.

However, the eatery insisted that they were doing their "due diligence" to "check with NUS to ensure it (the review) is not a scam or fake account."

Some other points they made are that:

It also appears that few people are sympathising with the eatery after its explanation that it had contacted NUS to check the veracity of the review. 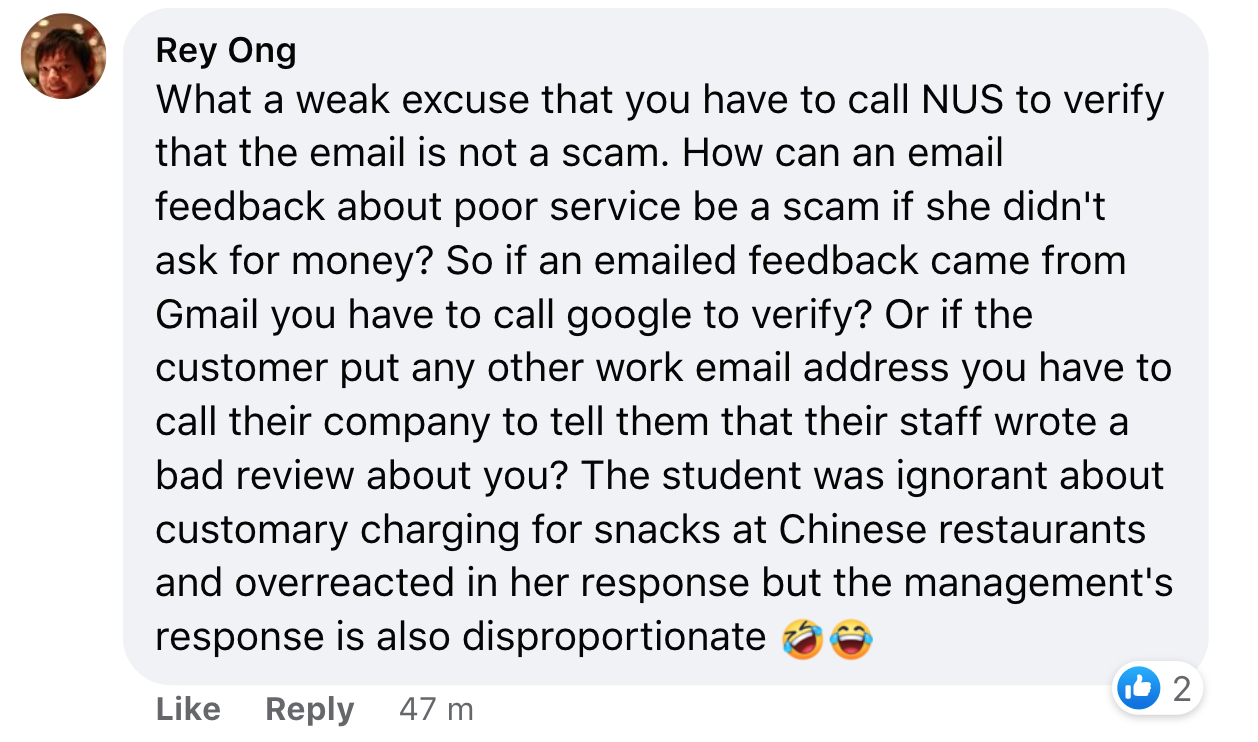 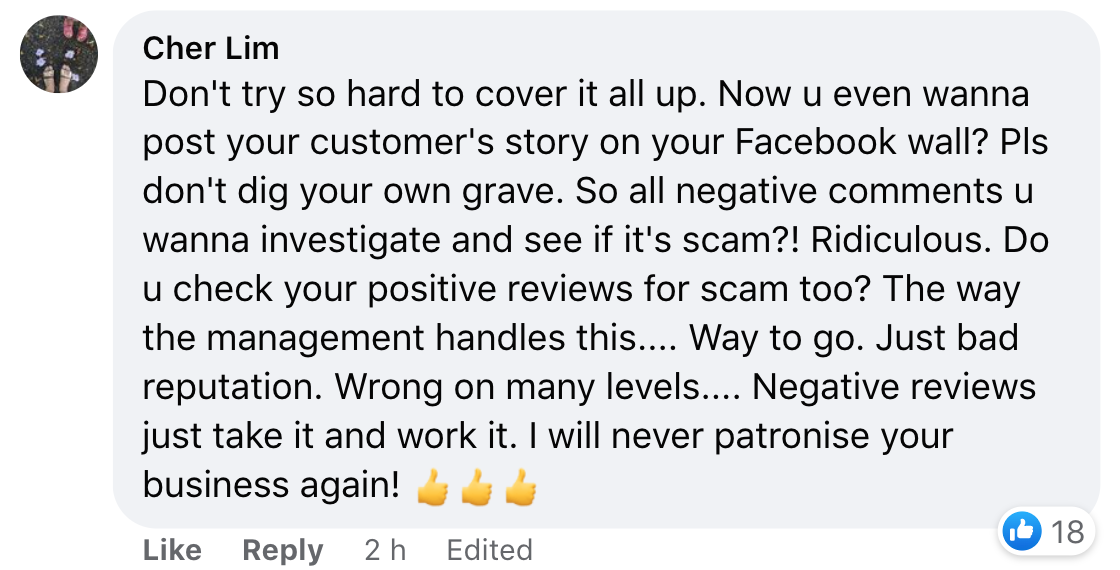 One user also raised the issue of whether it was hygienic for the peanuts to be reused, even if they were cling-wrapped. 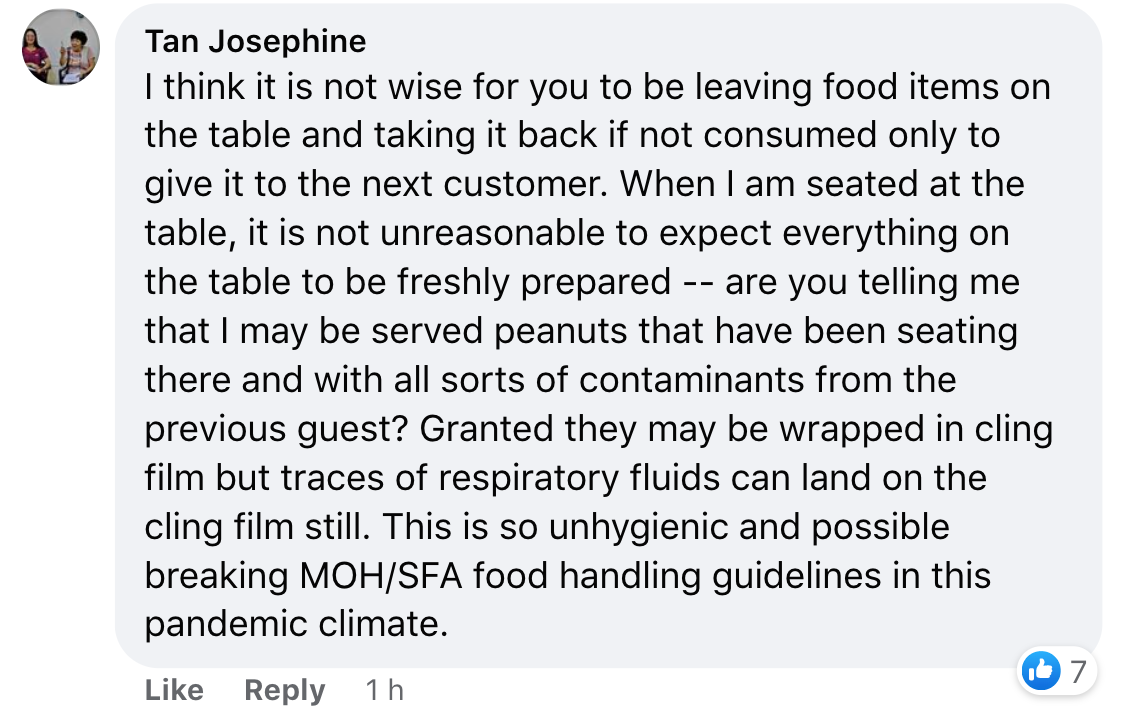 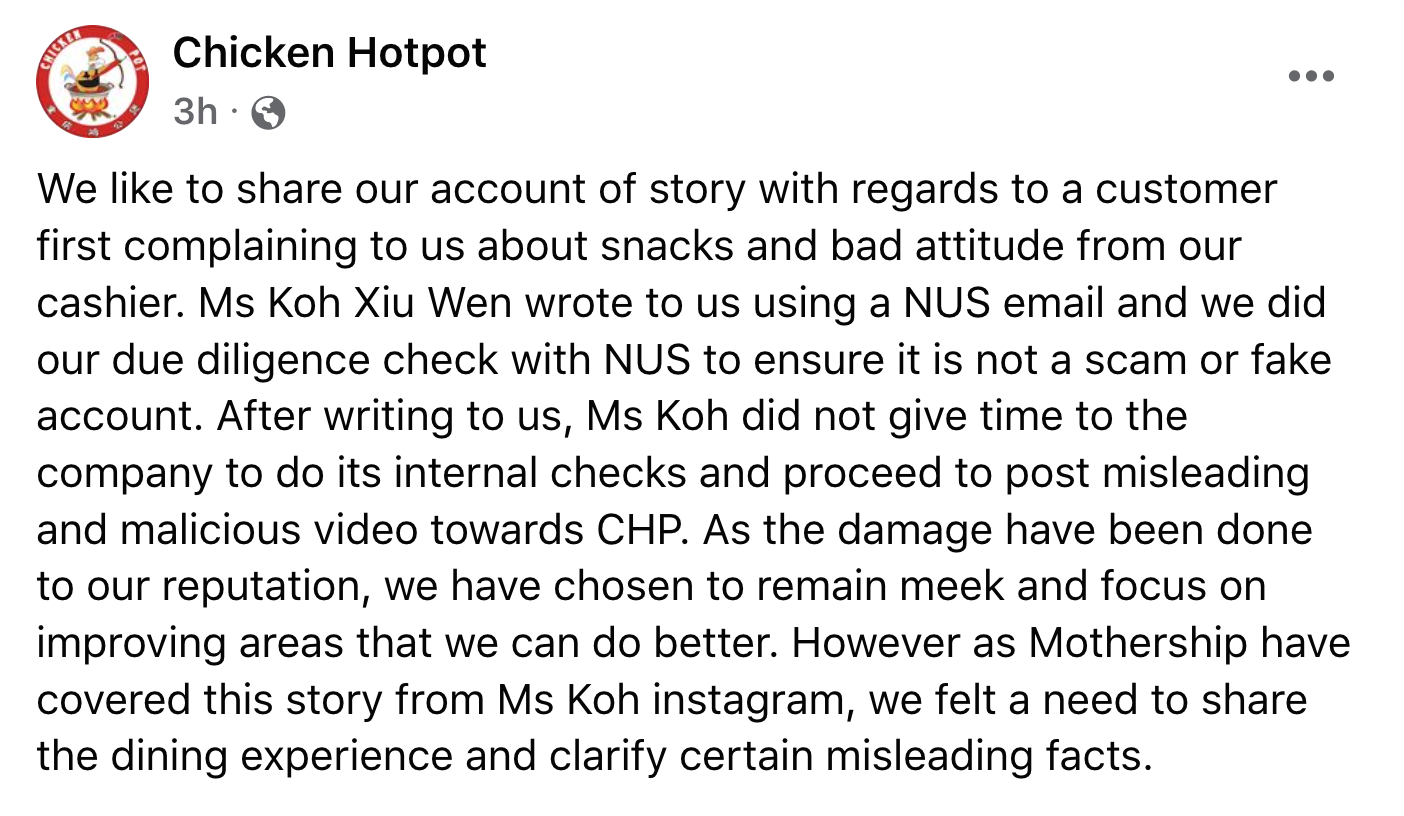 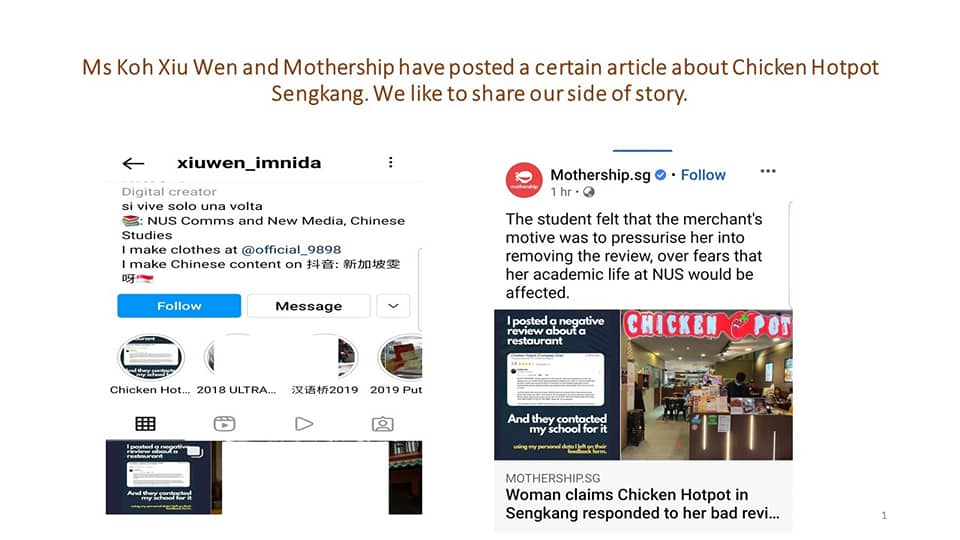 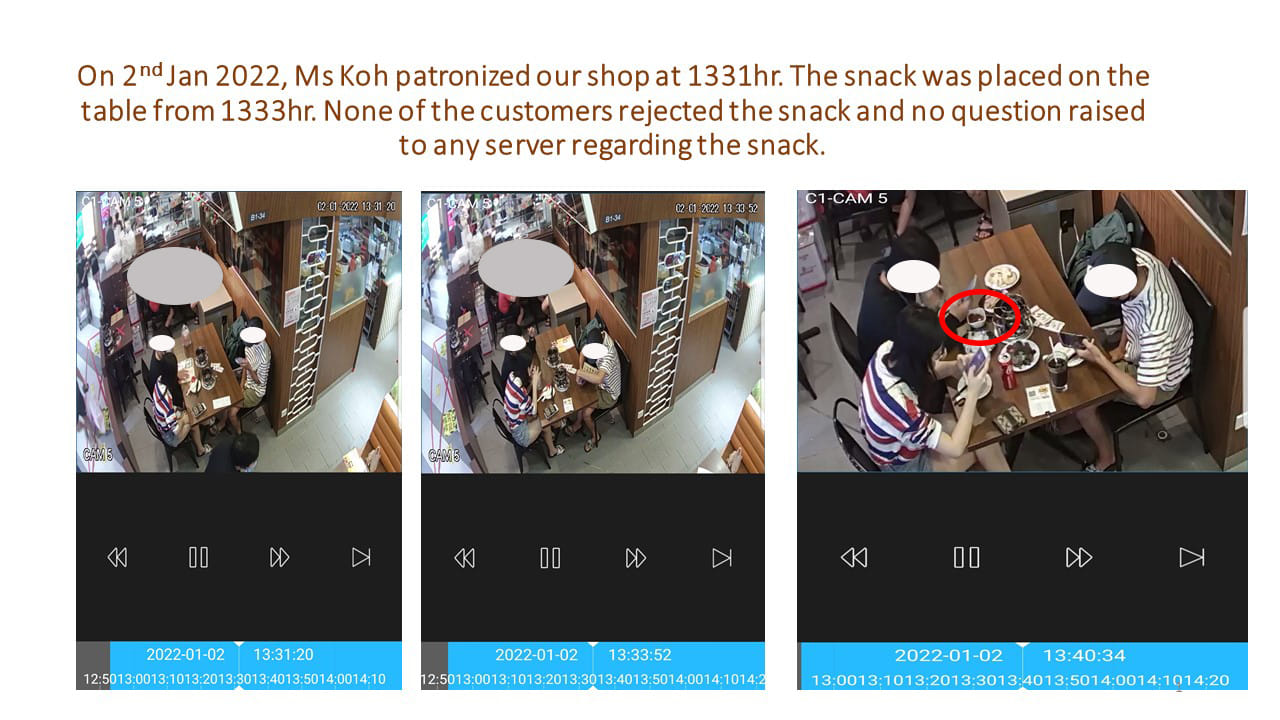 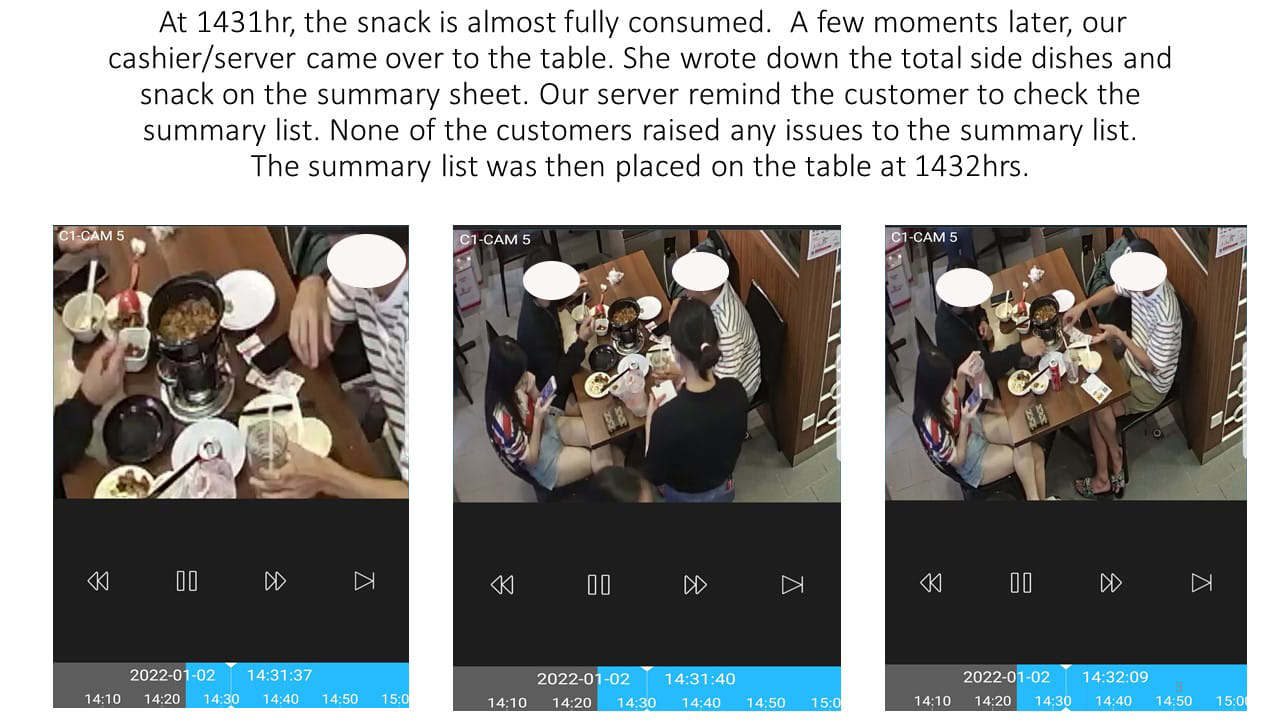 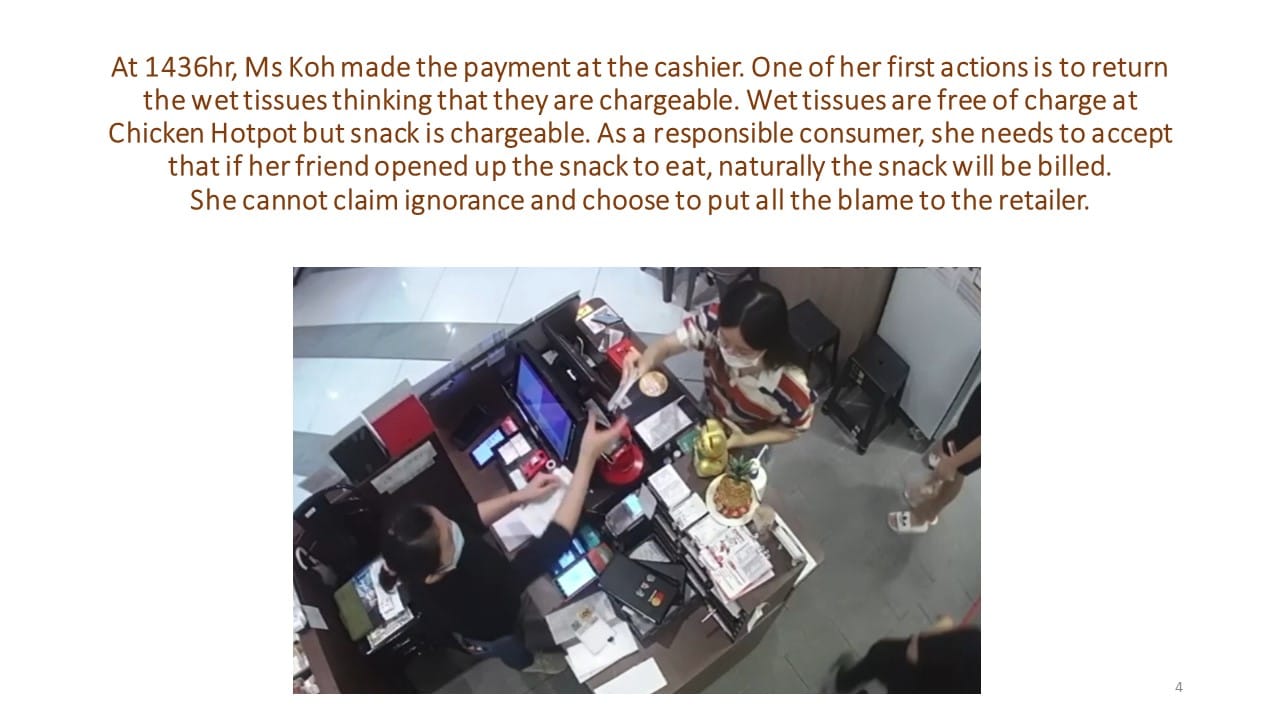 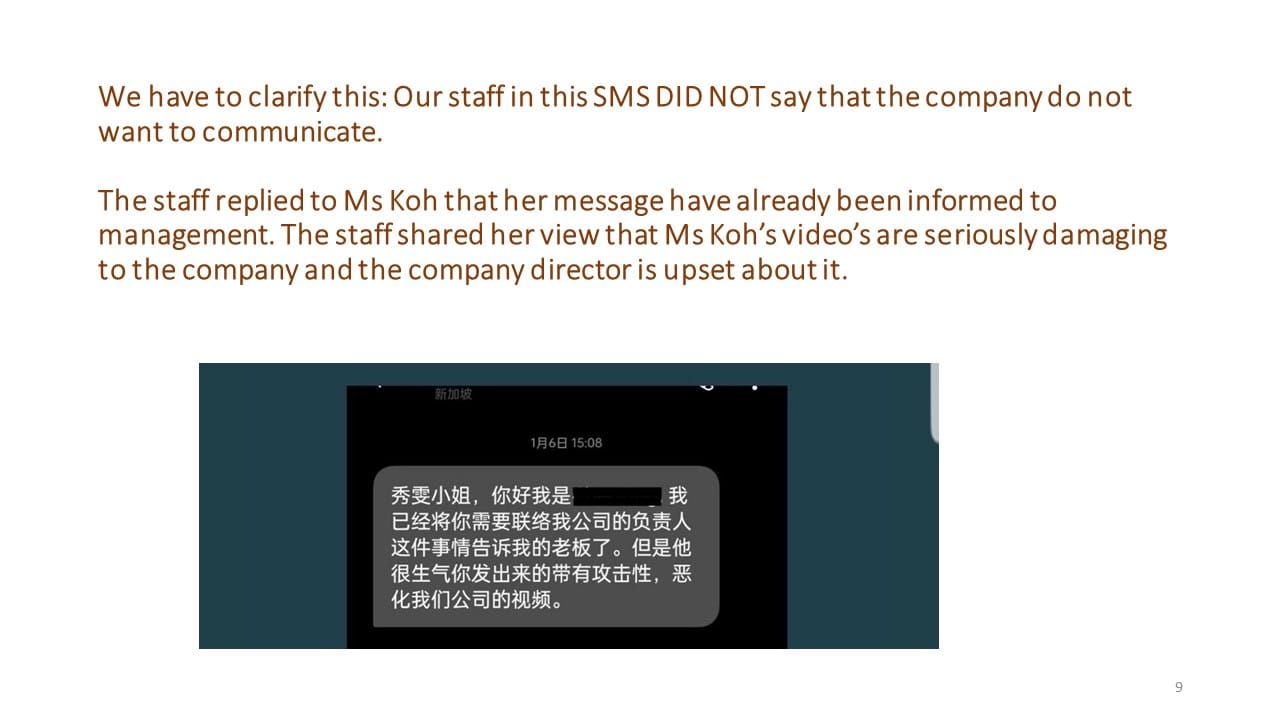 Customer: Chicken Hotpot told NUS that they were upset by the bad review

When contacted by Mothership, Koh's account appears to be quite different from what Chicken Hotpot is claiming.

According to Koh, the caller from NUS' IT security department had asked if she posted a negative review on her dining experience.

When Koh confirmed that she did, NUS apparently informed her that they were contacted by Chicken Hotpot, who were "very upset" with the video, and felt that she had "damaged their reputation."

The school also told Koh that her student email should not be used for purposes outside of school, which Koh had not realised prior to this.

"I also want to clarify that I used my student email out of habit. My phone is logged into my student email and I received more specific emails on the account as compared to my personal gmail which is full of promotions," Koh told Mothership.

Nonetheless, NUS reassured Koh that the act of reviewing itself has no bearing on her campus life.

When Koh once more enquired about the contents of the call between Chicken Hotpot and the school, NUS repeated that the eatery had expressed their displeasure at her review.

The school supposedly added that they would call Koh again if they were any updates on the matter.

The entire call between Koh and NUS was about six minutes long.

Contacted restaurant twice about the matter

Koh added that she had contacted the eatery twice about a potential breach of personal data, but did not receive an explanation, as Chicken Hotpot had allegedly refused to communicate with her after contacting NUS.

Separately, Koh has also responded to Chicken Hotpot on her Facebook page.

Top image via Chicken Hotpot on Facebook and Google Maps