A group of at least 11 cyclists got into a verbal altercation with a private hire vehicle driver in Chinatown at around 1am on Jan. 9.

The initial part of the incident was caught on the dashboard camera of the private hire car and shared online.

Now, a second video has emerged showing that the driver did get out of his car to challenge the cyclists to take him on after they expressed their displeasure with him.

The incident involved a large group of cyclists pedalling down New Bridge Road, and with them partially obstructing the private hire car that was turning left into Keong Saik Road. 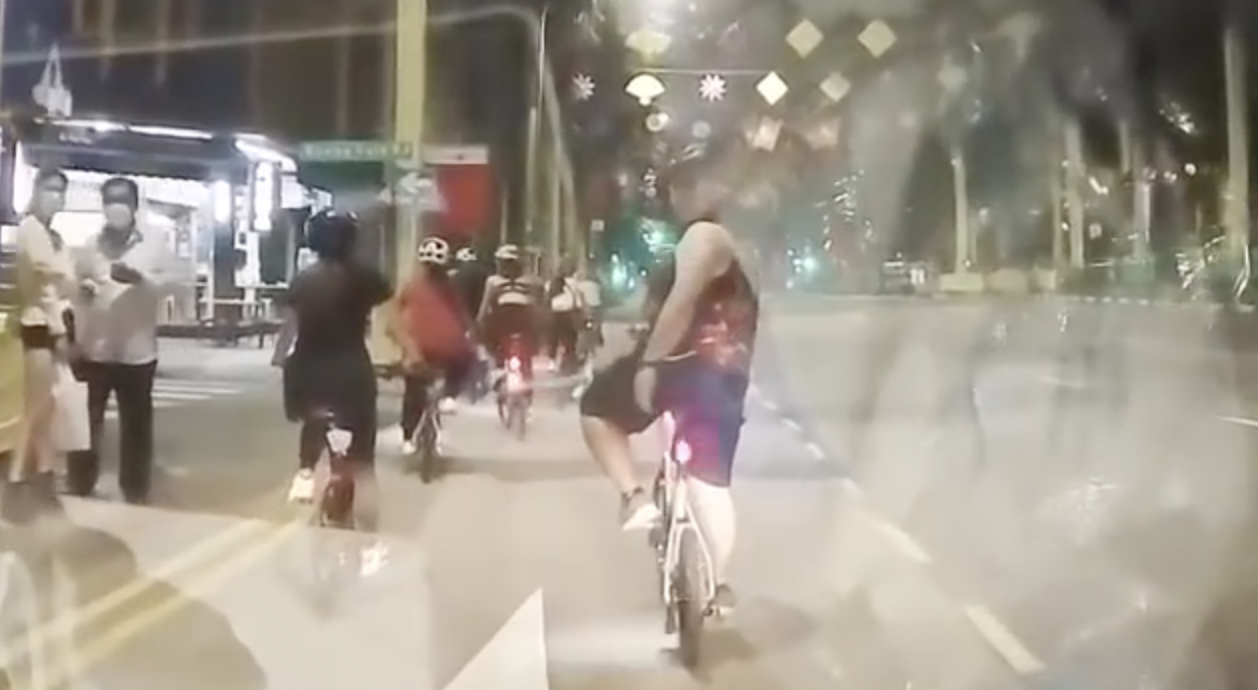 The last rider in the column of cyclists was seen in the footage turning back to look at the car, presumably because the driver had sounded the horn at the group to get them to move.

Based on the dashboard camera footage, after turning into Keong Saik Road and picking up a passenger, a cyclist in a blue t-shirt rode up to the right side of the car, overtook it, and dismounted.

He was then joined by three others, who also dismounted and the small group of cyclists confronted the driver.

The cyclist in blue placed his bicycle on the road, and gesticulated at the driver in his car, but not before banging his hand on the bonnet.

The eventual outcome of the incident was not revealed initially, though it appeared that the driver got out of the car to speak to the cyclists.

New footage that emerged online about a day after the initial video came out, showed the driver getting out of his car to escalate the confrontation.

He could be seen shouting at the group of cyclists, who backed away and did not want to engage in the altercation further, even though they outnumbered the driver.

The video could have been shot by one of the cyclists in the group and submitted to social media pages for publication.

The driver was seen shouting at the cyclists in Hokkien and asking them not to run away.

The driver could also be seen holding on to his mobile phone in one hand as he appeared to have been filming.

Here is a translation of what the driver said:

"All of you just give it your best shot."

Cyclist: "You only want to look for trouble with other people."

And if the submission of the second video was to cast the driver in a bad light, it appeared the move might have backfired.

Responses to the video of the driver shouting at the cyclists has been favourable to the driver.

The commenters who viewed the driver's actions positively said he did get out of his car to face the cyclists who then turned tail and walked away, despite gesticulating at the driver initially.

New rules for cyclists are in force

New rules for cyclists in Singapore have kicked in on Jan. 1, 2022.

A group of cyclists can only ride in a maximum group of five if they are riding single-file, or a maximum of 10 cyclists if the group is riding two abreast.

For more serious cases, the cyclist may be charged in court and face a fine of up to S$1,000 and/ or a jail term of up to three months for the first offence.

For a second or subsequent offence, the cyclist may face a fine of up to S$2,000 and/ or a jail term of up to six months.