Singapore is the second most expensive place to live in the world, according to the Economic Intelligence Unit (EIU)'s Worldwide Cost of Living 2021 report released on Dec. 1, 2021.

Paris, France shared joint second place with Singapore after it fell from the top spot.

Tel Aviv, Israel came out of nowhere to overtake all other cities to come out top as this year's most expensive city in the world.

Others on the list include Zurich, Switzerland in fourth place and Hong Kong in fifth place.

Here are the 10 most expensive cities in the world:

Living costs in over 173 cities in the world

The EIU’s 2021 index tracked the cost of living in 173 cities across the world.

It reported that this year's inflation rate of prices across cities is the fastest recorded over the past five years, even accelerating past the pre-pandemic rate.

This year's inflation rate rose by 3.5 per cent, year on year, based on U.S currency.

The factors that led to rising prices for commodities and other goods across cities include supply-chain problems, exchange-rate shifts and changing consumer demand, EIU reported.

The most expensive city for petrol is Hong Kong followed by Amsterdam and then Oslo, according to the index. 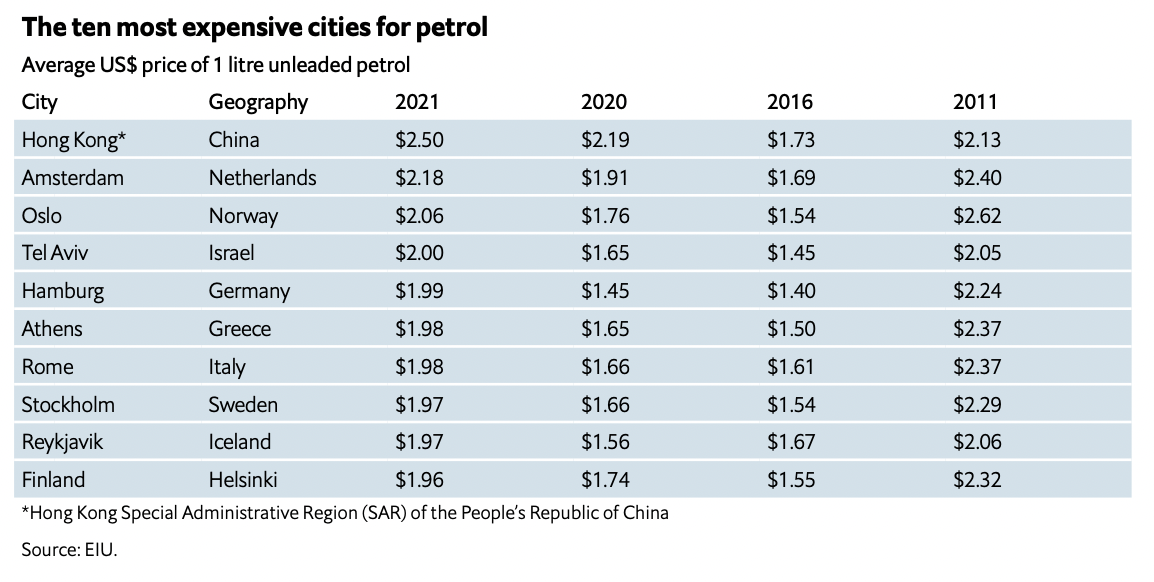 The most expensive city this year, Tel Aviv, comes in fourth.

However, not all cities saw price increases.

"Many of the cities towards the bottom of our rankings saw prices stagnate or even fall, partly because their currencies weakened against the U.S dollar," Upasana Dutt, head of worldwide cost of living at EIU said.

Despite the Covid-19 vaccine rollout, many major cities are still seeing spikes in Covid-19 cases which lead to changes in social restrictions.

These changes disrupted the supply of goods, leading to shortages and higher prices, Dutt said.

"Over the coming year, we expect to see the cost of living rise further in many cities as wages increase in many sectors. However, we are also expecting central banks to raise interest rates, cautiously, to stem inflation. So the price increases should start to moderate from this year’s level."

EIU's report stated that the rankings continue to be sensitive to changes in the Covid-19 situation globally.

Tel Aviv topped the rankings this year after coming in fifth place in 2020.

EIU reported that this is mainly due to the appreciation of the Israeli currency, the shekel, making local prices more expensive when converted into U.S dollar (USD).

It was pointed out that this was due to "Israel’s successful Covid-19 vaccine rollout".

In local-currency terms (USD) the average price increase was more modest, at just 1.6 per cent, but the prices of around one-tenth of goods in the city increased significantly, led by the shopping basket, comprising groceries; the price of household goods, cars and fuel also rose."

Top photos by Swapnil Bapat and Alexander Kagan on Unsplash.