Raybe Oh Siew Hui had to undergo 32 surgeries and was warded for four months after trying to save her boyfriend from the Tanjong Pagar car accident in February.

The 26-year-old talked about her experience and more on a Q&A (question and answer) on her Instagram Stories.

Oh said she was on the 18th day of her current stay in hospital and was "feeling damn bored but (couldn't) sleep", so she decided to do a Q&A.

32 surgeries and warded for four months

Oh revealed that during her initial four-month stay in the hospital after the accident, "the focus was nothing but to save my life".

She said she couldn't talk, drink, or eat for six days.

She was also intubated as she couldn't breathe on her own after her respiratory tract was injured.

She underwent 32 surgeries for skin graft and wound cleaning, and was also down with life-threatening pneumonia at one point.

Oh described that time as the "toughest period" of her life, but said she would endure "all the pain" that future treatments would bring, as "the toughest time is over".

Back in hospital for reconstructive surgery

Responding to queries about the progress on her recovery, Oh disclosed that she was back in the hospital for reconstructive surgery on her hand.

She said the procedure had to be done because the "thick scar" on her hand was affecting its function.

"There will be a few more reconstructive surgeries coming up next year. It's a long, long recovery journey for me," she added.

Oh also said she was "very sorry" for the pain her family had to go through and added that her mom was "crying a lot" during this period of time.

Oh expressed her wish, after she makes a complete recovery, to take her mom to "places that she wants to go".

Half a million in medical bills

When Oh received a question about her medical bills, she expressed her gratitude to her agent for handling the "tedious claiming process" of her half a million bill.

Stressing the importance of the rider, she also encouraged people to "get a rider if you haven't done so".

Reflections on the incident

Oh said she does not regret her decision to try and save her boyfriend and would choose to do the same even if she could go back in time.

She was supposed to celebrate her third anniversary with her fiancé on April 21.

She clarified in a later IG story that she would of course stop her fiancé from speeding if she could "turn back time" but was referring more to the act of trying to save him. 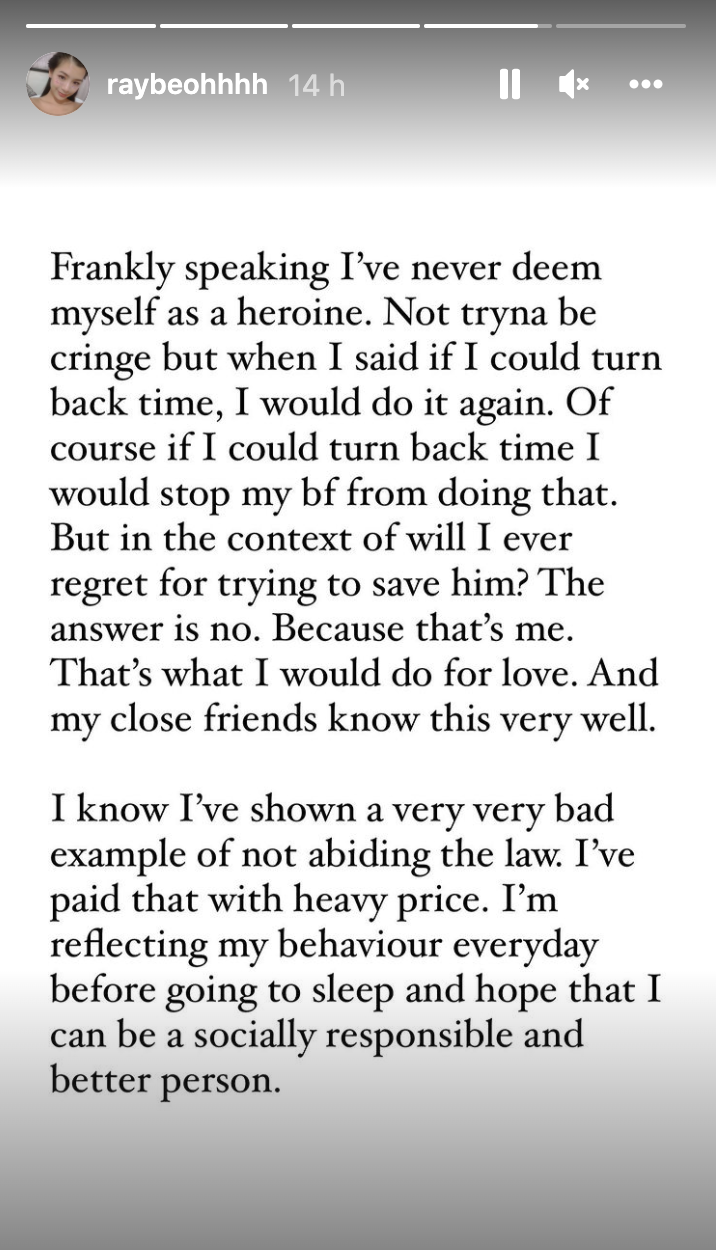 Oh also insisted that she has never considered herself a heroine for attempting to save her fiancé because that was what she would do "for love".

She further acknowledged that she had shown a "very, very bad example" of not abiding by the law, and added that she had paid a "heavy price" for that.

Oh said she would reflect on her behaviour every day before going to bed, and added that she hoped to be a "socially responsible and better person".