In today’s paper-chasing society, there is still a certain amount of stigma or stereotypes attached to private education institutions (PEIs) and their graduates.

When we asked our Instagram followers what are the impressions they have of private degrees and their graduates, here are some of the responses we received: 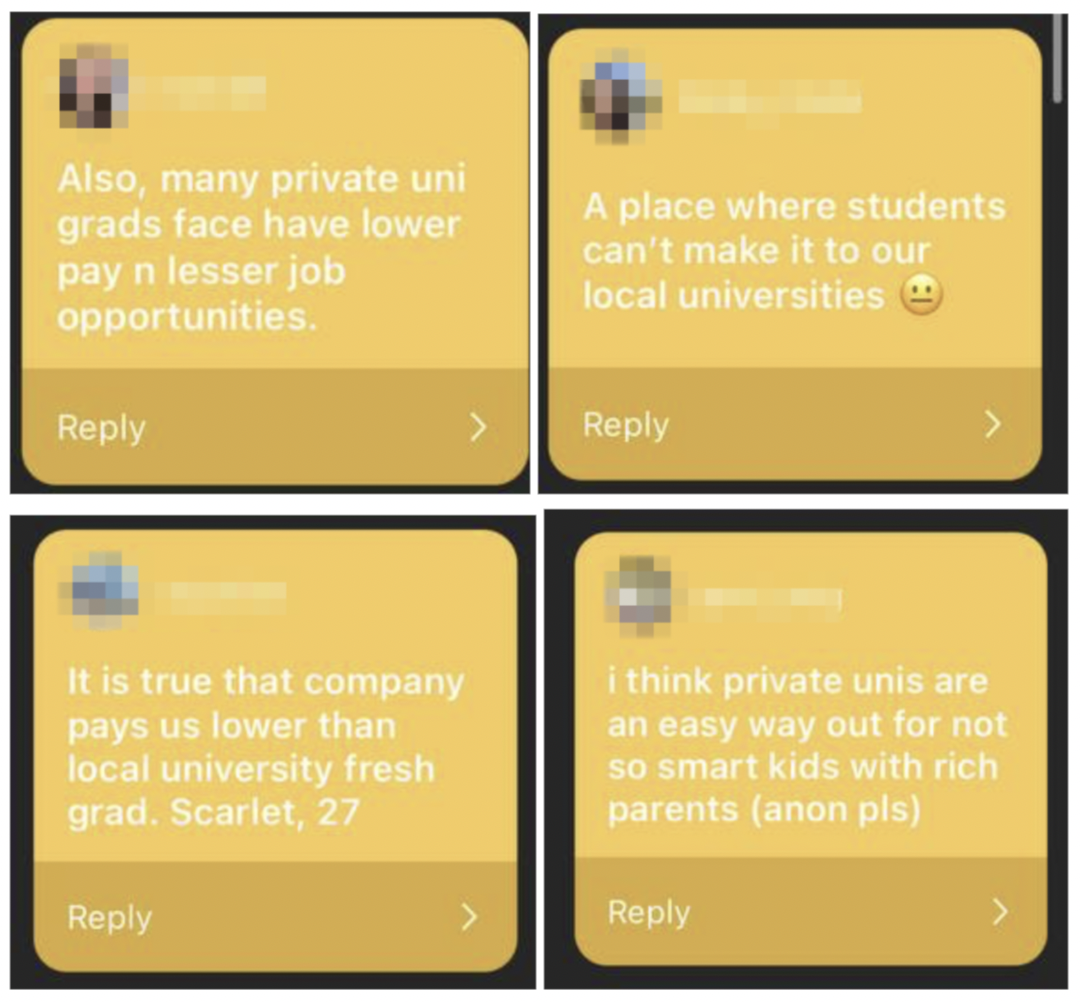 Of the comments we received, we saw a good number which repeated common refrains on private education institutions (PEIs) that most of us have heard before, such as those about the quality of the schools and the prospects of students once they graduate. For instance, many felt that students only enrolled in PEIs as they could not get into local or public unis, and that employers in Singapore still have a preference for graduates from the latter unis.

But are these impressions on private degree holders fair or even accurate? We ask two students who are currently attending PSB Academy what they think about these views.

Opinion #1: Private degrees are only for those who can’t make it to local (public) unis?

Karla Kasim, a student who graduated from PSB Academy with a Bachelor’s degree in Biomedical Science, doesn’t think this is true.

“There are many factors on why someone would choose and enrol in a PEI. We shouldn't assume someone went to a PEI because they are not good enough to get into local unis,” she said.

Before completing her degree, Karla had finished her Foundation Diploma in Life Sciences -- a field she chose as she liked the subject.

“The idea that there are so many more things out there which we have yet to discover is exciting to me,” she said.

As for Sarah Ng, who’s currently pursuing a Diploma in Media and Communications at PSB Academy, she acknowledged that this is “a pretty debatable topic” with “hidden contributing factors” to the individual choices that people make, which “some are not able to see and understand”.

Having chosen PSB Academy, as she thought it would give her opportunities in both her education and career that she couldn’t get anywhere else, Ng felt that the biggest advantage she has had so far was that she got to “interact with and mix around with different groups of people”, and “really experience how student life is like in university”.

She also has a clear goal in mind on what she would like to do after graduation.

“I would like to enter the media industry, specialising in the area of social media or media marketing,” she said.

While this is a view that’s often heard, Karla said she has never encountered employers like this before.

With her degree from PSB Academy, she has secured jobs at MNCs as well as in Nanyang Technological University.

“After graduating, I went on to become a Project Officer at a research lab in NTU, but due to medical reasons, I had to leave the role after a few months. Currently, I am a regional submission planner in regulatory at MSD,” she said.

Her peers did not seem to have met any difficulty during their job hunts as well. She added, “I have also seen my friends from PEIs get jobs in both the government and private sector.”

Karla further said that the biggest benefit for her was probably that she was able to graduate with a degree much faster as compared to her friends at local unis.

“I've had peers at PSB Academy who graduated when they were only 19 and I think that is a big advantage when starting your career,” she added.

In addition, she said more than the university where one graduated from, one’s working experience is more important, as it’s what “some employers in Singapore recognise as well”.

“Experience is more important as there are skills that you can learn from working, but not from what they teach you in uni,” she said. “I've seen this first hand when I started working.”

This is something that many readers on IG concur with as well, with a fair amount of responders adopting an optimistic view towards PEIs: 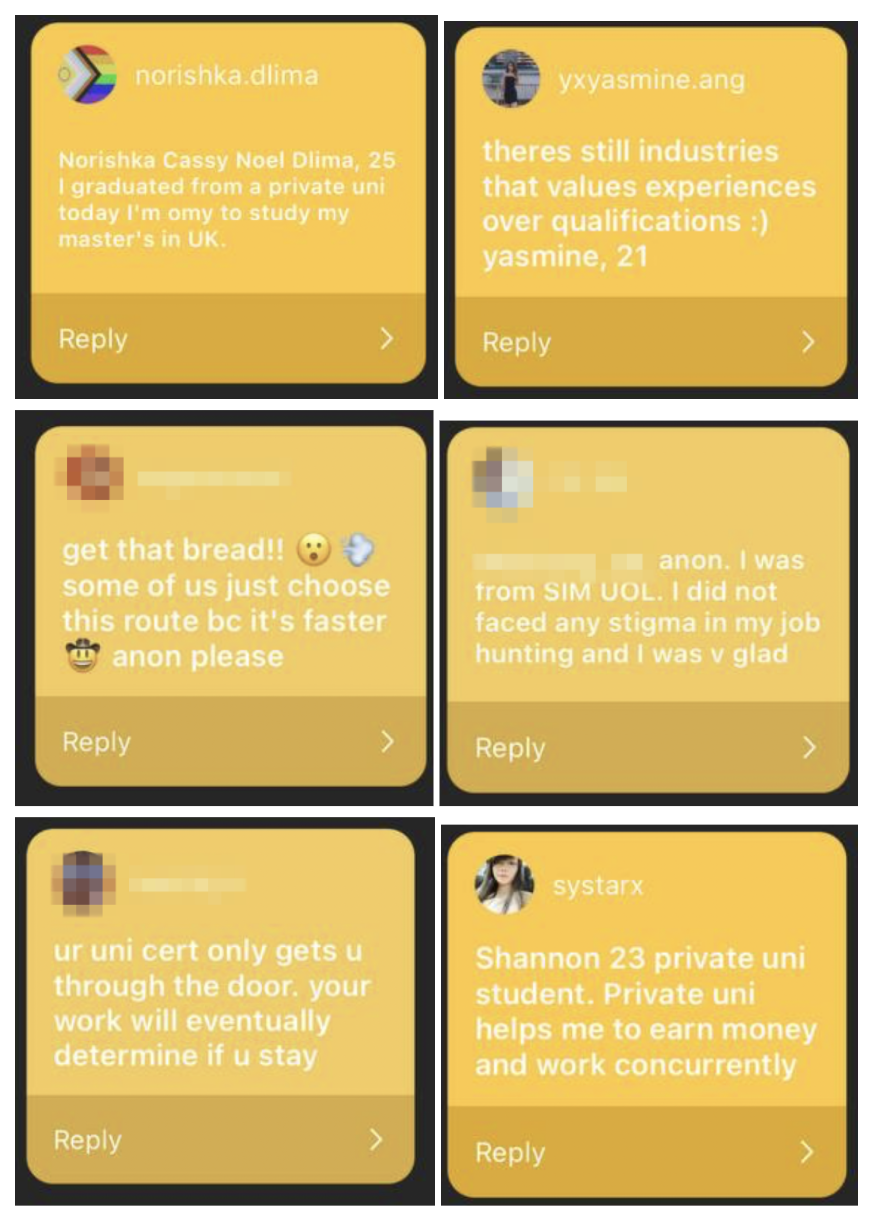 Some of them faced no judgment when looking for jobs, while others said ultimately, it’s one’s work experience and performance that will prove more valuable than one’s degree in the workplace.

Some cite the relatively faster track available with PEIs as well, saying that graduates can start their career earlier than those from local unis.

This is something that Ng recommends as well for those who are looking to go for “a slightly faster track”, adding that Diplomas offered at PSB Academy usually take “about nine to 15 months” to complete, depending on the course of specialisation.

Opinion #3: No quality in PEI’s curriculum

But a shorter time frame to finish a degree doesn’t necessarily mean that students are not well equipped for the real world outside.

Recounting her time with La Trobe University at PSB Academy, Karla said that because her degree course was condensed into two years, she barely had any free time during the course of her study.

“We only get one week of break before starting school again for every term, and as our term is only two months each, we usually spend most of the time studying in school,” she said.

But despite her hectic schedule where she had to sacrifice much of her social life, Karla was glad to have met amazing teachers who went on to become her mentors who helped her grow.

“Their lessons in life have helped me so much since then, and even now when I've graduated, I still remember what they taught me,” she said, adding that “the biggest lesson I learned was that it is okay to make mistakes and to keep trying until you get it right”.

As for the notion that private education institutions’ curriculums lack quality or are not rigorous enough, Karla sees it as a misconception that she would like to dispel.

For her, the “practical aspects” of lab work at school helped her a great deal during her first job as a research assistant inside the lab. “This is the same for some of my friends that went on to work inside labs, whether it's within a hospital or in a research setting,” she said.

In addition, the time she spent during lab work made up one of the most memorable and fun memories she had in school.

“The lecturer and the lab techs always made sure that we have everything that we need, and they are always ready to help us anytime,” she said, adding that the friendly faculty whom she could have “great conversations” with were helpful during her educational journey.

For Ng, while she doesn’t have lab work due to the nature of her diploma, she said the coursework in her curriculum are designed in such a way that students “don’t have to mug 24/7, only to sit for an exam at the end of the day to test their knowledge and skills”.

And this helps students in “the long run”, she said, especially when they enter the workforce where soft skills would come into play.

She added that a particular module she has taken, which was developed in partnership with Nas Academy, she and her coursemates learnt video skills, such as filming and editing, using professional tools and software like Adobe Premiere Pro.

In addition, they were taught how to “tell compelling stories” and how to brand their content -- something which she found “very beneficial” for her side business, where she handles all social networks and communications with the public.

“The course allows me to use the knowledge that I’ve gained from school to apply directly onto my side business, to tremendous effect,” she said.

This sponsored piece that’s brought to you by PSB Academy made the writer consider going back to school again.