An epic three-storey mural artwork has appeared in Singapore's Chinatown. 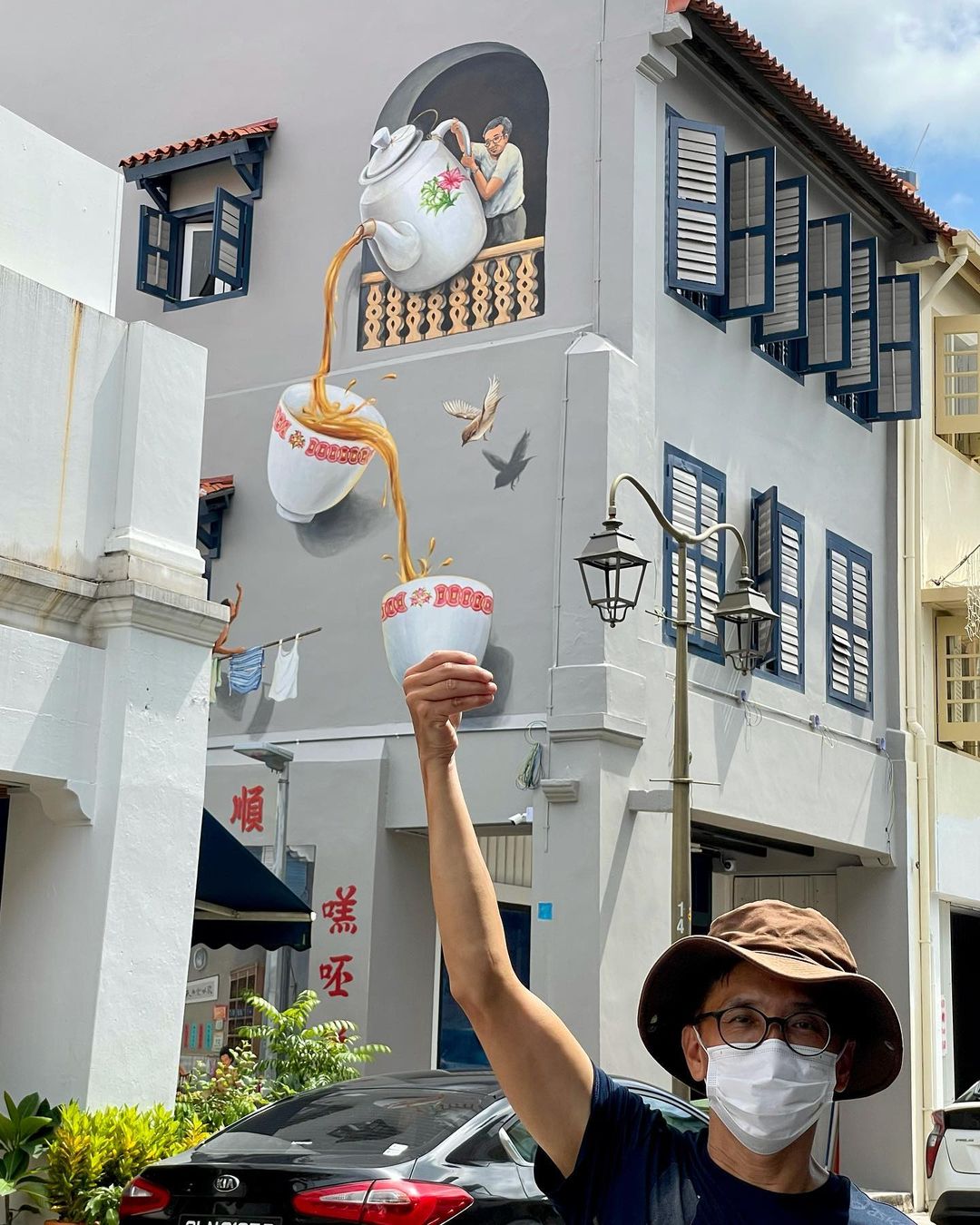 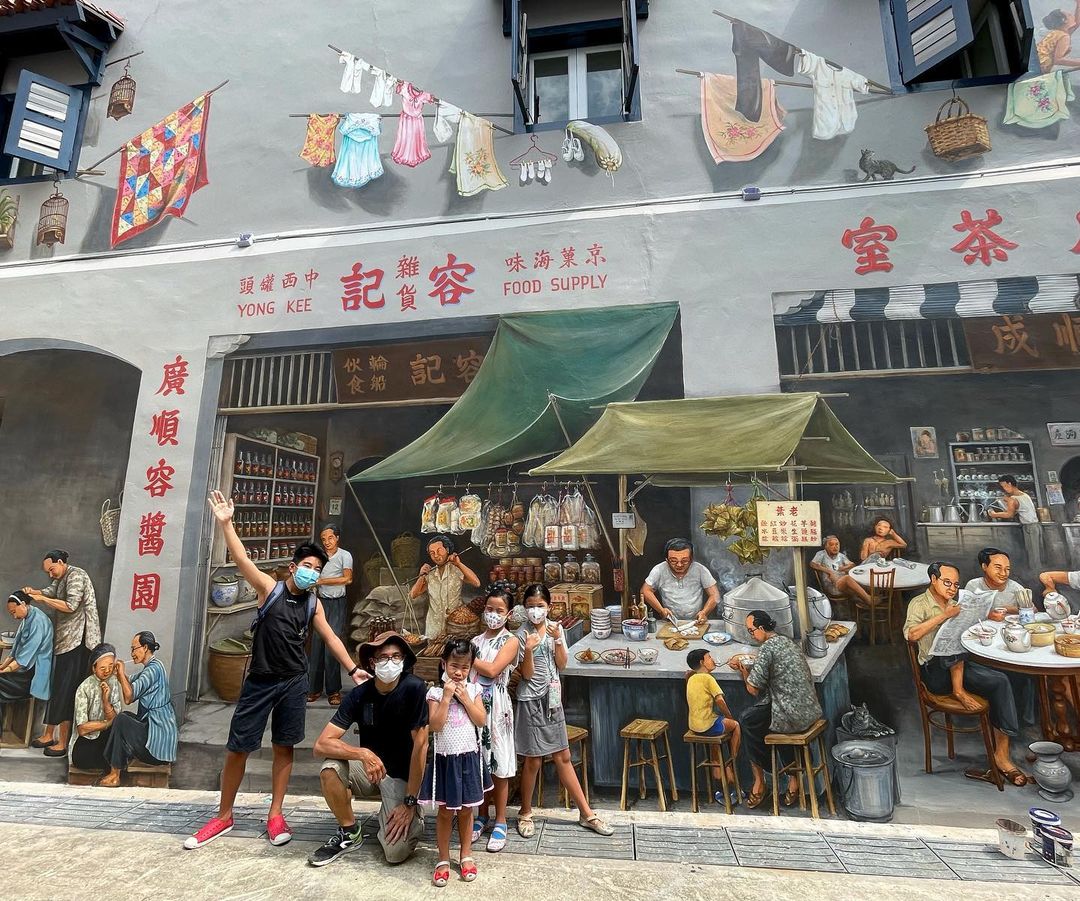 The artist is none other than Singaporean Yip Yew Chong, 52, who has been doing mural paintings since August 2015, despite not having any formal training.

This latest work along 30 Temple Street was completed in late November 2021, just as Singapore was riding out its latest wave of the pandemic.

Despite the enormous canvas size, the entire painting was originally scheduled to take three weeks, but the rain kept falling and Yip ended up taking four weeks.

One reason why he overshot his schedule was because the self-confessed detail-oriented Yip kept embellishing his work to add more to it.

He said: "It’s also due to my unstoppable passion in adding details along the way, many of which were unplanned."

Yip's art certainly did not go unnoticed in the four weeks he worked on it. 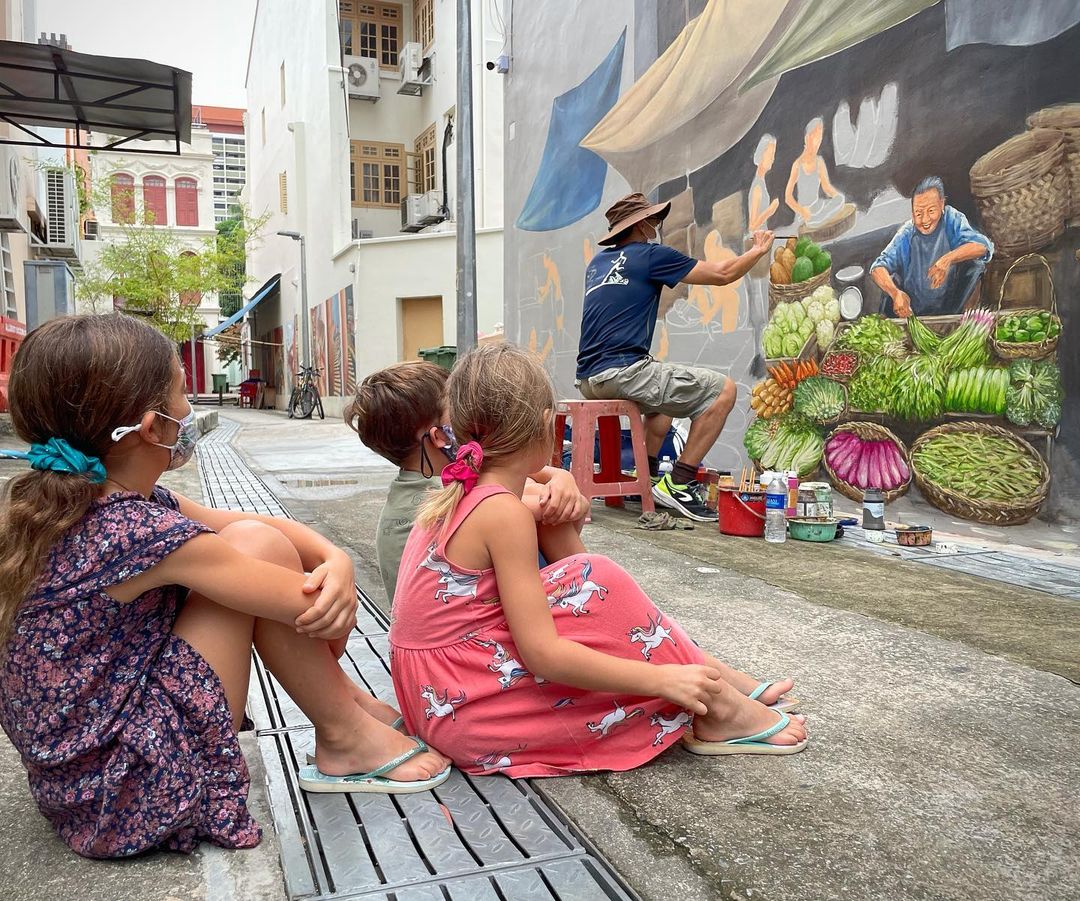 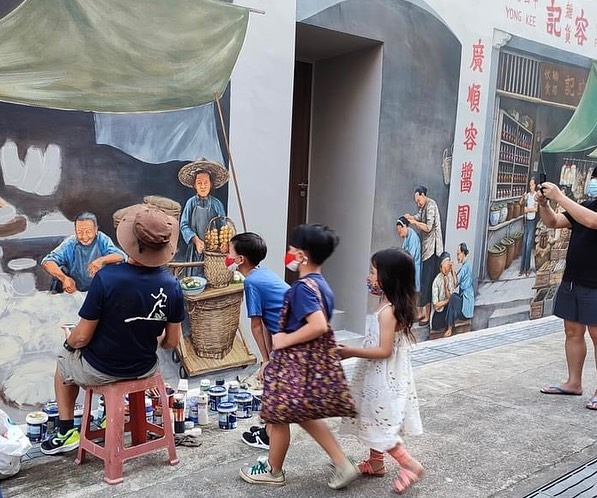 As he was painting in a public place, he attracted curious stares and appreciative nods whenever members of the public crossed paths with him.

Children even gathered around him to watch him paint.

Initially, Yip wanted to keep his project quiet without publicity as he did not want to attract a crowd during the pandemic.

But he was unmissable.

As he needed to paint the side of the building that was three storeys high, Yip had to operate a scissor lift to elevate him off the ground. Despite his ability to paint his subjects very fast -- a trait of his honed by many man hours of painting and practising -- Yip had to contend with the natural elements that appeared determined to slow him down.

Besides the heat and the lack of proper shelter, many days were spent waiting for the rain to subside during this wet end-of-year season.

Yip's efforts have been documented on video.

By his own reckoning, one perk of working in public was that an appreciative audience helped ensure he never went hungry.

Yip said: "I was continuously fed with drinks and snacks."

Funnily enough, eating and getting fed appears to be the most interactive aspects of the mural art as Yip incorporated many scenes that allowed visitors to the site to pose with. 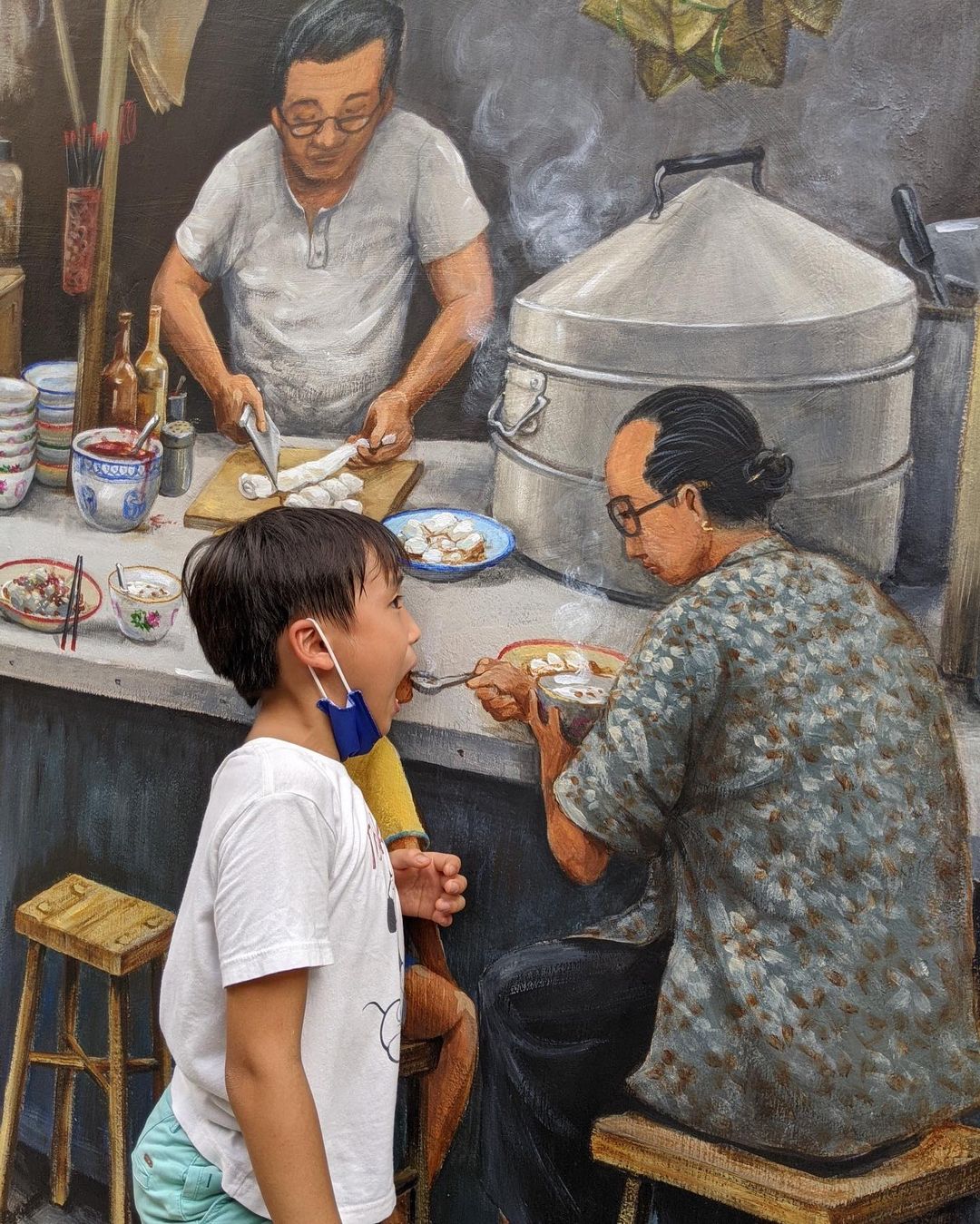 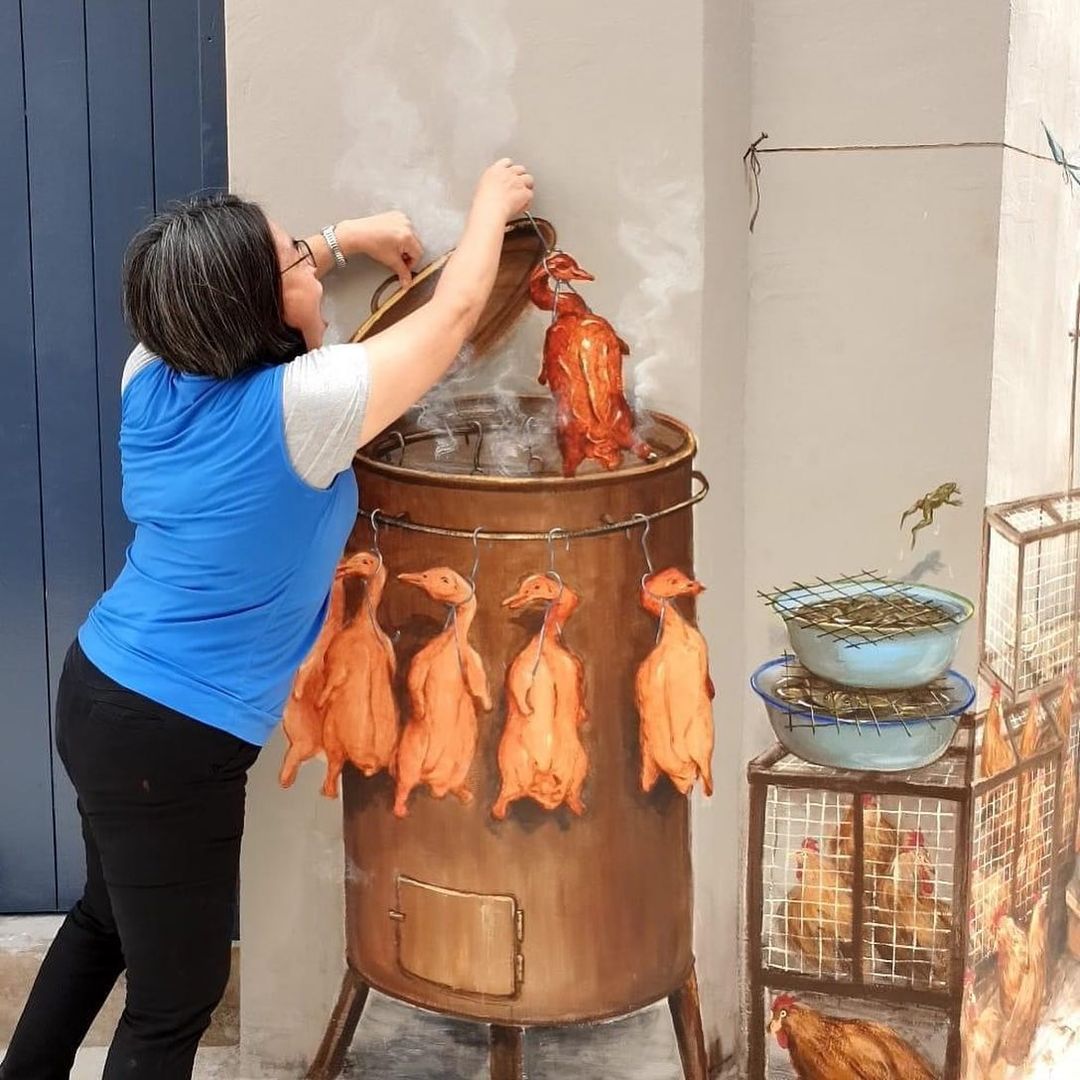 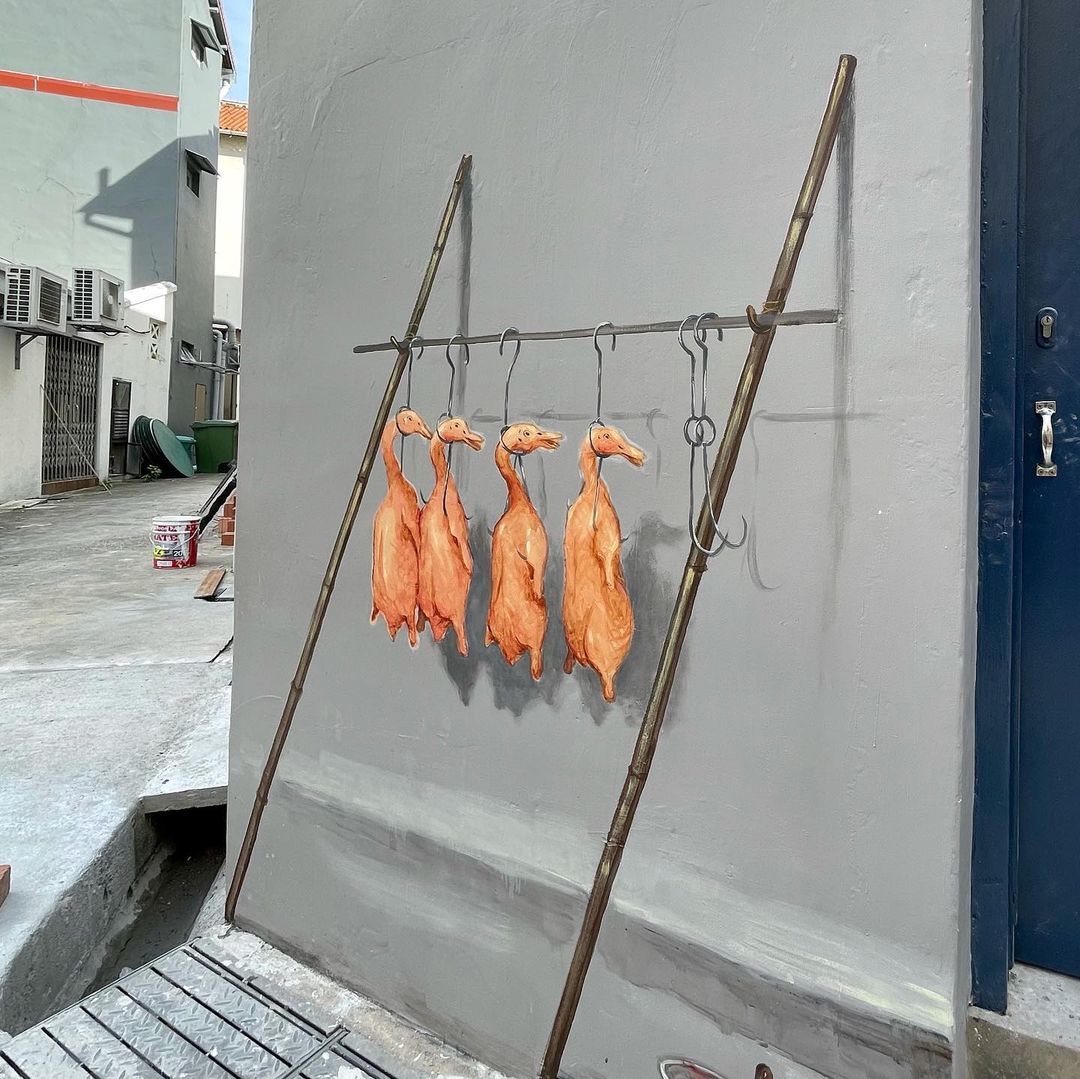 Here is a Q&A with the artist.

1. How did you decide on what scenes to paint on the walls? What gave you the inspiration?

This Chinatown street market scene is actually the fifth of six scenes I initially conceptualised way back in 2016 as a personal project for Chinatown where I grew up.

When this private commissioned mural opportunity arose, I took the opportunity to propose to the owner to paint the street market scene.

I am grateful they agreed and gave me lots of free play. I found the narrow alley and windows above very suitable to recreate the space into a busy market.

The detailed choices of types of stalls of the market scene were further decided based on my broad memory, research, fair representation and aesthetics.

2. Were you consciously planning on depicting scenes for people to pose with?

The private commissioning party actually requested me to allow spaces for visitors to engage with the mural, because they have seen how the public engaged with my earlier murals.

However I tried not to overdo it as I also wanted visitors to view the mural with deeper meaning than just photo opportunities. 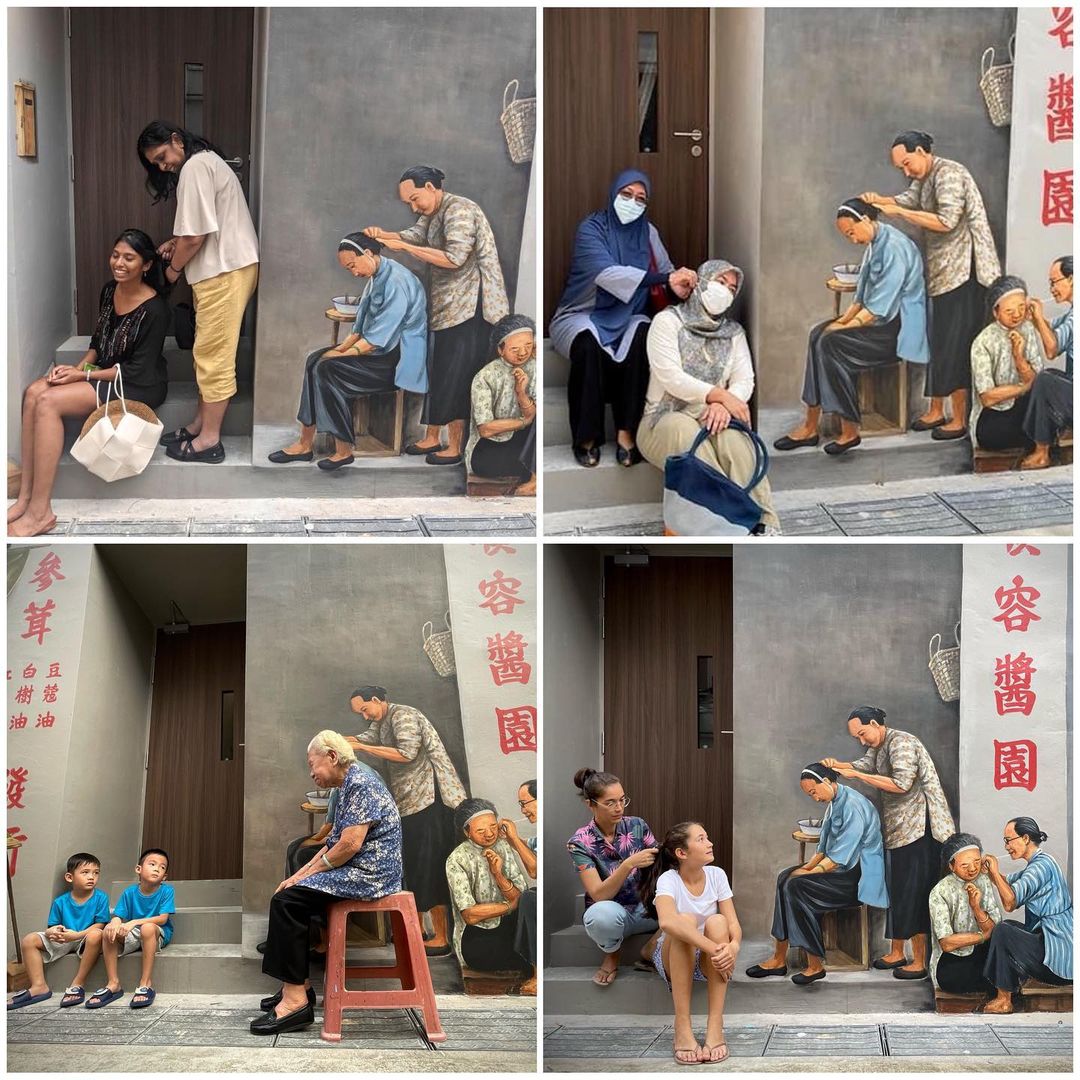 Even with that, visitors are very creative and come up with surprising poses.

For example, I didn’t expect people would pose with their mouth being fed by the granny at the chee cheong fun stall, nor the boy opening his mouth for the frog to jump in!

3. How many times did your art work get affected by the rain?

Of the four weeks, three weeks were especially wet with daily rains. Some days, the drizzles lasted the whole afternoon, making the days wasted.

When I was painting the higher walls, sudden rains washed the fresh paint down. Not only did I need to repaint the subjects, I also needed to repaint the areas that were not supposed to be painted on, with the base coloured paint.

4. Was this mural artwork tougher to pull off than expected or just as you expected?

Except for the rain, and some technical issues, the painting process is actually very similar to all other mural projects.

The narrow, uneven alleyway cramped with dustbins and obstructive lamp posts did pose some initial challenges.

The scissor lift could not operate on uneven ground, thus I had to find planks to make the ground even.

While operating the boom lift, I had to be careful of the lamp posts. My first task every morning was to push the dustbins to the back of the alley. After a while, it became routine😅.

5. Members of the public have commented that you paint very fast and complete your work in a short span of time, in this case it was 24 days. Would you like to respond to these compliments and perhaps reveal the difficulties you faced behind the scenes that others may not be aware of?

Some people said I am a painting machine!😅. Visitors who saw the painting process told me I painted very fast indeed, and at most times, I didn’t even look at anything.

I didn’t have any sketch. Occasionally I only looked at my mobile phone for detailed reference images of objects. I had learnt to paint faster with my mind! Some objects, like calendars and cats, I had painted so many times I may not even need to look!

I originally budgeted three weeks, but due to rain and technical issues, I overshot to four weeks.

It’s also due to my unstoppable passion in adding details along the way, many of which were unplanned. In the first three weeks, it was a secret project😅 because for safety, I didn’t want visitors to come when I had to manoeuvre the scissor and boom lifts at the narrow alleyway.

On the final week, after I announced the project through social media, many visitors came.

Some asked questions, requested for photo-taking and autographs, which I all happily obliged.

I was continuously fed with drinks and snacks😋. It’s been almost two years since I painted publicly on the street with audience. I really enjoyed the experience painting this mural. The interaction with the public and dynamics of the weather were all part of creating public art on the street!